KING OF KINGS AND LORD OF LORDS 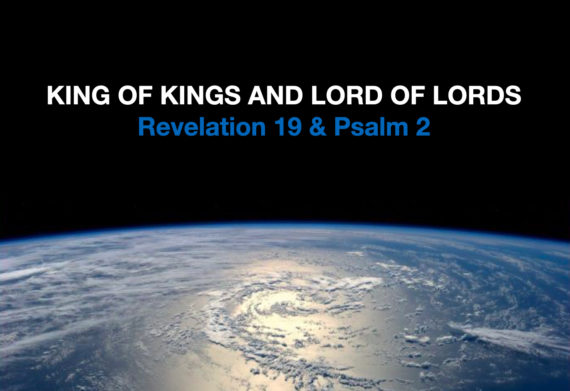 Six days into the new year we witnessed cataclysmic internal conflict in the world’s second largest democracy. As we move further into the year with the pandemic ongoing and upheaval and armed conflict continuing in several nations around the planet I thought we could use some more encouragement from another vision that John had of of Jesus in Revelation 19. My article on John’s first vision of Jesus in Revelation 1 may be found in the December 2020 issue of the Gospel Herald under ‘General Articles’ and at https://gospelherald.org/2103-2/

John affirms that in his trying times and ours, God is among His people, He speaks to us in His Word and He leads us through perilous times to a bright future in His glory.

The international turmoil leading up to John’s apocalyptic visions has relevant parallels to our time. It is helpful in reminding us that our God is sovereign over all nations and in understanding why He would encourage His people with the Book of Revelation ending the Bible with the greatest apocalypse ever recorded.

Near the earliest likely date for Revelation, Nero was Emperor of Rome from AD 54–68. The last four years of his reign were particularly tumultuous and eccentric ending with his suicide. Coincidentally, Domitian, born in AD 51, was a teenager through Nero’s reign. This, coupled with the problems of his dysfunctional family of origin was formative in the kind of leader that he became at the end of the first century, ruling from AD 81 to 96 – the latest likely time for John’s writing.

Nero’s persecution of Christians was random but violent. In Lives of the Caesars, Suetonius wrote,

“Punishment was inflicted on the Christians, a class of men given to a new and mischievous superstition.”

“inflicted the most exquisite tortures on a class hated for their abominations, called Christians by the populace…. Covered with the skins of beasts, they were torn by dogs and perished, or were nailed to crosses, or were doomed to the flames and burnt, to serve as a nightly illumination.”

During the last half of Nero’s reign, ca. AD 62–63, Peter wrote to Christians in Pontus, Galatia, Cappadocia, Asia and Bithynia that their brothers and sisters were also being faithful in the face of persecution;

“…knowing that the same experiences of suffering are being accomplished by your brothers and sisters who are in the world” (1 Peter 5:9b).

Nero’s reign was followed immediately by the chaotic year of the four emperors, Galba, Otho, Vitellius and the beginning of the Flavian trio starting with Vespasian June 68 to December 69.

Through this time the Jewish war against the Romans was escalating in Israel. In AD 67 the Romans besieged and captured Gamla (aka Gamala, meaning camel) the hilltop fortress city just west of the top of the Sea of Galilee known as the “Masada of the North.” In fulfillment of Jesus’ words, in AD 70, the Romans under Vespasian’s son Titus destroyed Jerusalem and threw Herod’s phenomenal temple into the streets below. As Jesus had predicted, “‘not one stone here will be left upon another, which will not be torn down’” (Matthew 24:2; Mark 13:2; Luke 21:6). In ca. AD 73, after months of trying, the Romans finally captured Herod’s impregnable mountain top fortress of Masada.

In the context of these turbulent times, God affirmed His ultimate sovereignty over the nations through John’s vision in Revelation 19:11–16:

And I saw heaven opened, and behold, a white horse, and He who sat on it is called Faithful and True, and in righteousness He judges and wages war. 12 His eyes are a flame of fire, and on His head are many diadems; and He has a name written on Him which no one knows except Himself. 13 He is clothed with a robe dipped in blood, and His name is called The Word of God. 14 And the armies which are in heaven, clothed in fine linen, white and clean, were following Him on white horses. 15 From His mouth comes a sharp sword, so that with it He may strike down the nations, and He will rule them with a rod of iron; and He treads the wine press of the fierce wrath of God, the Almighty. 16 And on His robe and on His thigh He has a name written: “KING OF KINGS, AND LORD OF LORDS.”

In describing Jesus’ rule with His rod of iron as King of Kings and Lord of Lords (cf. 17:14) John alludes to God’s relationship with the nations of the world in Psalm 2 which was is so fitting in its descriptions of the global scene today:

Why are the nations in an uproar

And the peoples devising a vain thing?

2 The kings of the earth take their stand

And the rulers take counsel together

Against the Lord and against His Anointed, saying,

And cast away their cords from us!”

4 He who is enthroned in the heavens laughs,

The Lord scoffs at them.

5 Then He will speak to them in His anger

And terrify them in His fury, saying,

6 “But as for Me, I have installed My King

Upon Zion, My holy mountain.”

7 “I will surely tell of the decree of the LORD:

Today I have begotten You.

8 Ask it of Me, and I will surely give the nations as Your inheritance,

And the ends of the earth as Your possession.

9 You shall rule them with a rod of iron,

10 Now then, you kings, show discernment;

Take warning, you judges of the earth.

11Serve the LORD with reverence

And rejoice with trembling.

12Kiss (do homage to) the Son, that He not be angry and you perish on the way,

For His wrath may be soon be kindled.

How blessed are all who take refuge in Him!

Nations, including our own, are still rebelling against God, tearing up and casting off His cords of eternal love and divine laws of truth and grace. Yet, those who take refuge in His Son are blessed.

Jesus is called “Faithful and True, and in righteousness He judges and wages war.” Faithfulness, truth and righteousness are fundamental attributes of God which He desires to be in His people .

The white horses of Jesus and the armies of heaven are emblematic of victory and purity as are the robes of His servants.

His eyes are a flame of fire as we saw in John’s first vision and we hear in Jesus’ letter to Thyatira. He sees and knows all, everything that is in us and in the hearts of all whether rich or poor. He alone knows things about Himself that remain unrevealed or beyond our comprehension.

On His head are many diadems. Unlike the crowns (stephanos) awarded to winners of athletic contests and resembling wreaths of vines and branches, diadems were jeweled and costly. They were worn by kings and spoke of sovereignty. In the book of Revelation, Jesus had many diadems around His head.

The blood on his robe is from the war against sin over which He is victorious. He offers victory to those cleansed by His blood.

John opens His Gospel with the revelation of Jesus as the Word of God and affirms it here at the culmination of Scripture: “His name is called The Word of God.”

The sharp double-edged battle sword of His mouth is the same victorious image we saw in chapter 1. Jesus reigns victoriously in word and deed over all the affairs of humankind. To Jesus God delegated the authority to impart eternal life and to judge how people and nations respond to Him, on the basis of His Word.

Jesus is the only one to ever walk on earth who now has all authority and all power and the wisdom to use it wisely, with justice and compassion.

So that all the world shall know this, God displays it prominently upon Him for all to see:

“And on His robe and on His thigh He has a name written: “‘KING OF KINGS, AND LORD OF LORDS.’”

God determines the times and boundaries of the nations (Acts 17:26). In these times of global turmoil and regardless of who sits on the thrones and chairs of worldly power, the Faithful and True Word of God is King and Lord over them all, ruling from His throne in heaven.

“How blessed are all who take refuge in Him!”