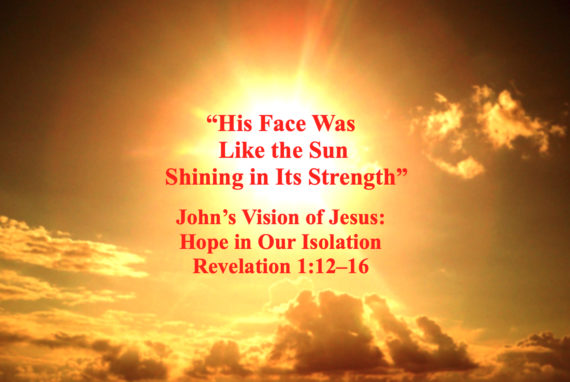 In this pandemic we are experiencing global isolation unique in this millennium.

God understands the sufferings that cause and accompany worldwide isolation.

His Apostle John was in isolation on the island of Patmos.

John wrote to Christians on the mainland identifying with their isolation and persecution as a “fellow partaker in the tribulation and kingdom and perseverance which are in Jesus” (Revelation 1:9).

John needed encouragement from God to see beyond this tribulation and isolation. So do we. God gave His churches visions to overcome and live victoriously in the midst of overwhelming forces: “Blessed is the one who reads, and those who hear the words of the prophecy and keep the things which are written in it; for the time is near” (1:3).

This first awesome vision John receives is of our glorious risen Saviour in Revelation 1:12 to 16,

Then I turned to see the voice that was speaking with me. And having turned I saw seven golden lampstands; 13 and in the middle of the lampstands I saw one like a Son of Man, clothed in a robe reaching to the feet, and girded across His chest with a golden sash. 14 His head and His hair were white like white wool, like snow; and His eyes were like a flame of fire. 15 His feet were like burnished bronze, when it has been made to glow in a furnace, and His voice was like the sound of many waters. 16 In His right hand He held seven stars, and out of His mouth came a sharp two-edged sword; and His face was like the sun shining in its strength.

These are awesome sights and sounds!

Jesus spoke to John with a “loud voice like a trumpet” in 1:10. Then John says, “I turned to see the voice that was speaking with me…” (1:12). Suddenly hearing Jesus’ voice behind him like a loud trumpet must have been a huge surprise for John.

John heard Jesus’ voice for three years on earth. John also heard the voice of God His Father at Jesus’ transfiguration. Now John is hearing the voice of His risen Lord in a whole new wonderful way!

“And having turned I saw seven golden lampstands!” (1:12). John had known of one lampstand of importance, the golden Menorah in the temple which held seven lamps to light the area where God’s priests served. Now John sees seven separate lampstands of gold which Jesus reveals are the seven churches, the assemblies of God (1:20). Gold is a precious metal indicating their value to God. Jesus purchased them at the highest price ever paid for anything, His own body and blood (Acts 20:28; Revelation 1:5; 5:9).

The Menorah held oil lamps. The light the churches hold forth is Jesus Himself, “the light of the world” (John 8:12; 9:5). Jesus lights the way to heaven upon which we walk and serve with Him. In 2:1 we learn that Jesus “walks among the seven golden lampstands.” He is ever present wherever His people are assembled.

“His head and His hair were white like white wool, like snow…” (1:14). In Daniel’s vision of God, the Ancient of Days he wrote,

Jesus’ hair is striking and pure like His Father’s.

“His feet were like burnished bronze, when it has been made to glow in a furnace” (1:15). Bronze is an alloy of copper and tin making it harder than copper alone. Burnishing makes it shine. Israel came into the Promised Land in the late Bronze Age. God lead them to victory by His might and the strength of bronze weapons.

“His voice was like the sound of many waters” (1:15). Jesus’ feet like burnished bronze and His voice reflect His power and authority over all realms of His Creation. He delegates some of His authority to the overcomers in Thyatira where skilled trades included expert metal workers in bronze, “‘He who overcomes, and he who keeps My deeds until the end, to him I will give authority over the nations’” (2:26).

“In His right hand He held seven stars” (1:16). In God’s Word the right hand is a place of blessing and power. Jesus sat down at the right hand of God. To the Laodiceans Jesus said, “‘The one who overcomes, I will grant to him to sit with Me on My throne, as I also overcame and sat with My Father on His throne’” (3:21).

“Out of His mouth came a sharp two-edged sword” (1:16), a long sharp broad sword used in intense battle in war that pierces and cuts on both sides. In 19:15 we see that, “From His mouth comes a sharp sword, so that with it He may strike down the nations.” There are comforts in these strong words. God wins. Jesus will be victorious over the nations and all those threatening the eternal welfare of His churches.

The sun is an awesome wonder of a star that lights up and heats our whole world. It is the source of almost all energy in our food supply through photosynthesis. Compared to a hundred watt light bulb, the sun’s brightness, its luminosity, is 3.8 x 10 to the 26th power watts. Jesus’ face is shining like the brightness of about four trillion billion 100 watt lights!!! “God is light” (1 John 1:5). He “dwells in unapproachable light” (1 Timothy 6:16). His glory is brilliant, magnificent, light.

What do we learn from John’s glorious vision?

Jesus walks among us. He’s with us today and everyday. We are never alone.

We are His lampstands to hold up His light to His world.

Jesus unites all of His autonomous churches in His Spirit and living and active Word.

Jesus is the Son of Man, King and Lord of our lives.

Jesus has all authority and power over the nations and the history of God’s world.

God wants us to listen to His voice always.

As minority group overwhelmed by global forces we can feel isolated. John’s vision of Jesus gives us perpetual hope of sharing in His victory and glory.

When you see gold, think of how valuable you are to Him.

When you see someone with brilliant white hair, think of Jesus and His unity with His Father.

When you see a fire, think of Jesus’ all knowing eyes.

When you hear a waterfall or a trumpet, think of Jesus’ mighty voice speaking to you.

When you look up at the stars think of Jesus’ powerful right hand and the angels of all those assembled in Him.