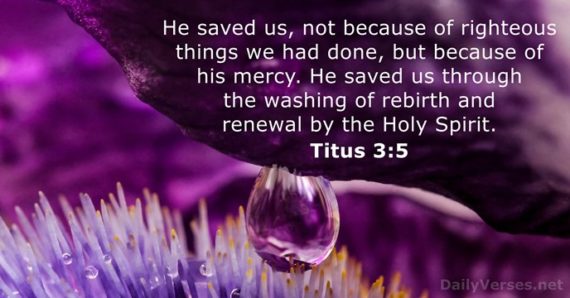 Titus 3:4–7 is one sentence in the original Greek. In one extended sentence, the Apostle Paul encompasses the full gospel of Jesus Christ!

“But when the goodness and loving kindness of God our Saviour appeared, he saved us, not because of works done by us in righteousness, but according to his own mercy, by the washing of regeneration and renewal of the Holy Spirit, whom he poured out on us richly through Jesus Christ our Saviour, so that being justified by his grace we might become heirs according to the hope of eternal life” (Titus 3:4-7).

As English-speakers, we have an aversion to long, run-on sentences. However, in the New Testament, lengthy, carefully constructed, complex sentences are not uncommon. This suits the “big idea.” The inter-relation of ideas combine to form one powerful thought. Various translations break Titus 3:4–7 into shorter sentences; the version given above, that maintains the NT format, is the English Standard Version (ESV).

Paul writes this letter to his fellow-worker, Titus. Yet, one can understand that its message was intended as well for the hearing and instruction of Christians and congregations in Crete—and elsewhere! And, of course, its teaching is precious to saints in every age, including our own.

This teaching begins with the big BUT, (Greek, de), that points to what went before. Paul has just recited a litany of human errors: “For we ourselves were once foolish, disobedient, led astray, slaves to various passions and pleasures, passing our days in malice and envy, hated by others and hating one another” (Titus 3:3). We were in a predicament. But God intervened to save us from ourselves.

The subject and predicate of this long sentence is, “he saved” (5b), that is, “God our saviour” (4b). God intervened and saved us from ourselves. Everything before verse 5b builds to God’s saving, and everything following explains how he saves.

In the order of the Greek text, the cautionary statement comes first: “he saved us not because of works done by us in righteousness” (5a). This does not mean that righteous deeds are not important for the Christian. (We will conclude this piece by noting what Paul has to say about “good works” in the Letter to Titus.) Christians have no power to effect salvation on their own! Yet, they can strive to be righteous, emulating their master.

God accomplishes this salvation, “according to his own mercy” (eleos, 5b), through two means: “the washing of regeneration and the renewal of the Holy Spirit” (5c).

In the concentrated phrase, “the washing of regeneration (palingenesia, again, birth),” Paul alludes to the conversion experience. He identifies with the words of Jesus: “Truly, truly, I say to you, unless one is born of water and the Spirit, he cannot enter the kingdom of God” (John 3:5). Paul here also echoes the words of Peter at Pentecost: “Repent and be baptized every one of you in the name of Jesus Christ for the forgiveness of your sins” (Acts 2:38). It is God who effects baptism as a saving “washing.” Saving faith includes the confidence that God’s power energizes the penitent one’s immersion into water—where Jesus is present in the water with the subject, with their shared experience in both death and life (see Rom. 6:4).

It is Paul’s expression, “renewal (anakainosis, to make new again)of the Holy Spirit,” that may cause us some challenge. Indeed, God in saving us gives us two gifts, the forgiveness of our sins, and an empowered spiritual life through the presence of the Holy Spirit. Salvation is from sin and for righteousness. Peter spoke of the “gift” of the Holy Spirit for those who, believing that Jesus is the Messiah, repented and were baptized (Acts 2:38b). Paul uses this word in Romans 12:2, where he talks about the importance of “the renewing (anakainosis) of your mind, so that you may prove what is the good, well-pleasing, and perfect will of God.” This is a weighty task, but believers have the help of heaven! cf. the Spirit “…whom he poured out on us richly through Jesus Christ our Saviour”!

“…so that being justified by his grace we might become heirs (kleronomos)….” Salvation is having our sins removed so that we might stand before our great God and Creator as justified, as inheritors of all the blessings due to God’s heirs! As Paul stated earlier, it is not because of “works done by us in righteousness” that brought about our salvation, but rather “according to his own mercy” (4b), the grace of God is received through Jesus Christ our Lord!

The concluding phrase of the One Sentence Gospel is, “…according to the hope of eternal life.” This is as Paul had stated in his opening greeting of this Letter to Titus: “…for the sake of the faith of God’s elect and their knowledge of the truth, which accords with godliness, in hope of eternal life, which God, who never lies promised before the world began…” (1:2) This is the greatest news of all time, and it can be stated in a single, albeit compound, sentence!

This complete Gospel, succinctly stated in one extended sentence, is set in the context of the importance of righteous works. We are not saved by our good works, but we are saved to do good works! This is the powerful teaching of Titus.

Immediately following the One Sentence Gospel (Titus 3:4–7), Paul writes: “The saying is trustworthy”—is Paul referring to the saying just completed, The Gospel?—“I want you to insist on these things, so that those who have believed in God may be careful to devote themselves to good works. These things are excellent and profitable for people” (3:8).

Elsewhere Paul states, “…be ready for every good work” (3:3b). Earlier, in a powerful statement, Paul writes, “For the grace of God has appeared, bringing salvation for all people, training us to renounce ungodliness and worldly passions, and to live self-controlled, upright, and godly lives in the present age, waiting for our blessed hope, the appearing of the glory of our great God and Saviour Jesus Christ, who gave himself to redeem us from all lawlessness and to purify for himself a people for his own possession who are zealous for good works” (2:11–14).

PrevPreviousDecember 2020
NextLessons from Titus 2Next