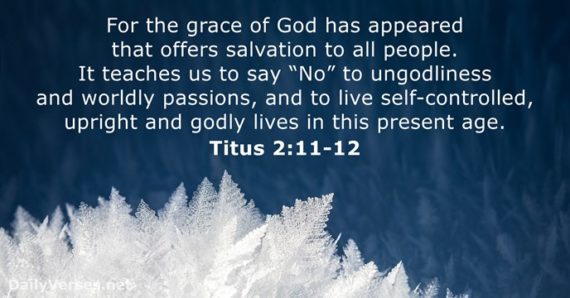 Paul left Titus in Crete to straighten out what was left unfinished (1:5). Interestingly, Cretan Jews were present on the day of Pentecost (Acts 2:11). It is likely these Cretan Jews, having obeyed the gospel and become Christians, brought the gospel back to Crete.

Titus was to appoint elders in every town, according to certain qualifications (1:5–9). These men were to be holy blameless men who people could easily recognize as desiring to please the Lord and do what is right in all situations. Titus was also to deal with many who were teaching falsely and influencing others to the point of ruining whole households and this for the sake of dishonest gain (1:10–16). The kind of people Titus had to deal with were referred to as rebellious people, mere talkers and deceivers (1:10); liars, evil brutes (or beasts), lazy gluttons (1:12). He was to rebuke them sharply (1:13). He was also to correct and teach.

In chapter two we see the things Titus was to teach people and how they were to live their lives in ways that glorify God. Though the instructions which Paul commanded Titus to teach were intended to straighten out the Christians on Crete, these instructions apply to us today as well!

In verse one, Paul told Titus to “teach what is in accord with sound doctrine.” The word ‘sound’ here means “whole or healthy.” Strong’s Greek Dictionary says, “Figuratively to be uncorrupt; true in doctrine.” This was in contrast to those Jews who were teaching what was false. Chapter one tells us that these Jews were caught up with Jewish myths and influenced by people who reject the truth. We are to be true in doctrine. We are to teach right doctrine, healthy doctrine and stand on it. We are to teach what God says, not what man says.

In verse two, we read instructions for the older men. Other translations say “aged men.” The aged men were to be temperate. Some Bible versions might have the word “sober” or “sober-minded” instead of temperate. It means being sensible, able to think clearly, to have sober judgment, being clear minded.

“Likewise, teach the older women to be reverent in the way they live” (2:3). Some translations say “aged women.” They were to be reverent in the way they live. The Contemporary English Version says, “Tell the older women to behave as those who love the Lord should.” They were to live their lives in such a way that it showed they had love and reverence for the Lord. Every Christian should live this way. People should see our good behaviour and be left with the impression that we love the Lord. We are to be reverent in the way we live. The fact that Titus was to teach this to the aged women implies that many of them were not doing this. How were they behaving? The fact that Paul commanded Titus to teach them, “not to be slanderers or addicted to much wine, but to teach what is good,”is a pretty good indication! They were slandering others.

Older women were also to train the younger women as it says in verse five “To be self-controlled and pure, to be busy at home, to be kind, and to be subject to their husbands, so that no one will malign the word of God.” Instead of being busy-bodies out in the market place they should be busy at home. They needed to show godly submission to their husband and so honour God and His Word.

In verses seven and eight, Titus was not just to preach sermons but also to live them. He was to practice what he preached setting a good example of godly behaviour. We all need to set good examples as Christians, otherwise how can we teach others and grow as God’s people? Titus was to set such an example so that, as it says at the end of verse 8, “they have nothing bad to say about us.” Paul was including himself here because his reputation was on the line too. He was, after all, the one who vouched for Titus and sent him there to Crete to do this important work.

In verses nine and ten, Paul taught about the master/slave relationship. Slavery is not legal today in North America but I believe that these two verses give us principles concerning employer/employee relationships. Slaves worked hard for their masters so that they could receive the necessities of life such as food, shelter, etc. In the same way, many of us work for our employer so that we may receive our wages to pay for the necessities of life. We are to try to please our boss and not talk back to them. We are not to steal from them either but rather try to show them that we can be fully trusted. This way we can gain their trust and respect and possibly open a door to share the gospel. We are to set a good example in the work place.

In verses eleven to fourteen, Paul highlighted what God did for us to make us holy in His sight. God has shown us grace, which is love and mercy that we did not deserve or merit. Because God loved us in this way, we are to say “no” to ungodliness contrary to how God wants us to live our lives. We are also to say “no” to worldly passions. God doesn’t want us to chase after the things that the rest of the world does. We are to live self-controlled, upright and godly lives in this present age while we wait for Jesus to return. Paul was not just saying that to Titus and the Cretans. What he said is for all Christians of all times.

Chapter two finishes with Paul saying in verse fifteen, “These, then, are the things you should teach. Encourage and rebuke with all authority. Do not let anyone despise you.”

The book of Titus teaches us how we should live in this world while we wait for the coming of our Lord. Let’s be productive people and set good examples for others that we may be more effective and convincing when we are trying to bring the lost to Christ. Most importantly, let’s remember Christ who gave Himself for us to redeem us from all wickedness and to purify for Himself a people that are His very own, eager to do what is good!