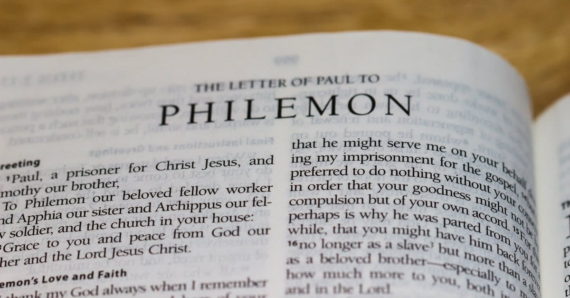 The gospel of Jesus Christ transforms people and relationships, often radically. It changed Paul from a “blasphemer, and a persecutor and a violent aggressor” to an Apostle of “grace, mercy and peace” (1 Timothy 1:13, 2). The gospel of Jesus’ death, burial and resurrection for our forgiveness and justification brought Philemon’s slave Onesimus freedom in Christ. The power of the gospel was set to transform the relationship of Onesimus to his master Philemon through the brilliantly tactful, sensitive, conciliatory and intentionally firm but respectful rhetoric of Paul’s letter. In addition to his opening positive reinforcement of Philemon (4–7), in just fourteen verses (8–22) Paul gives Philemon more than twenty reasons to welcome Onesimus as his new brother in Christ.

Though Paul’s letter to Philemon is one of five single chapter Bible books and the third shortest of all by word count in its original Greek (335), after 2 and 3 John (245 and 219), Paul employs the elements of his customary letter format in the delicate task of introducing Philemon to his new brother Onesimus.

In his salutation and grace (1–3) Paul identifies himself and Timothy as senders and Philemon, Apphia, Archippus and the church in Philemon’s house as recipients.

It’s easy to miss the fact that though we refer to Paul’s letter as “Philemon,” he addresses it to the whole church in his house. This is a subtle but important part of Paul’s approach to seek his desired positive outcome of reconciliation and avoid potentially disastrous, possibly deadly, consequences for Onesimus.

As his owner and master in the Greco-Roman world Philemon had the right to punish Onesimus severely. By including all of Philemon’s brothers and sisters in Christ as recipients, Paul is counting on their support, and Philemon’s consciousness of the new ethical order of the kingdom of God, to embrace reconciliation as beloved brothers. Kingdom ethics reach far beyond the bounds of Philemon’s civil expectations and obligations.

Paul extends his customary blessing of “grace to you (plural) and peace from God our Father and the Lord Jesus Christ” (3), further evidence of his positive intentions and best wishes for Philemon and all those assembling in his house.

Paul’s thanksgiving and prayer in 4–7 affirm his ongoing personal attention to Philemon in his prayers. An important observation here evident in the original language of Paul’s writing is that all of the six personal pronouns Paul uses, “you” and “your,” in 4–7 are all singular. Having drawn the entire church into view, Paul now focuses his efforts on building up Philemon noting his love and faith toward his Lord Jesus and all the saints. Paul commends Philemon for his effectiveness through all the good things in him for Jesus’ sake. He praises Philemon for the joy and comfort that is Paul’s through their mutual love, calling him brother. Brotherhood is a key reality in Philemon’s relationship with Paul which Paul will employ in his appeal for Onesimus.

In the heart of his letter (8–21) Paul bases his appeal to Philemon on behalf of Onesimus on more than twenty powerful facts and principles: Paul’s confidence and authority to order, (8), love’s sake, seniority and the humble state of imprisonment (9), his spiritual fatherhood of Onesimus his child in the faith (10), Onesimus’ new usefulness to Philemon and Paul, though he was formerly “useless” he is now “useful” which is the meaning of his name Onesimus (a popular name for slaves, 11), sending Onesimus in person as his own heart (12), his potential to serve Paul on Philemon’s behalf (13), giving Philemon the right to decide of his own free will rather than “by compulsion” (14), God’s providence in transforming Onesimus and returning him forever (15), their new relationship as spiritual brothers (16), Philemon’s regard of Paul as his partner (17), Paul’s offer to pay any damages (18–19), Philemon’s debt of his life to Paul (19), Philemon’s benefit to Paul in the Lord through refreshing his heart (20, “benefit,” onaimēn, sounds much like Onesimus, “useful”), Paul’s confidence in Philemon’s obedience – and – Paul’s belief Philemon “will do even more that what I say” (21) and his confidence Philemon will be praying for Paul to come himself. It is also possible that Paul’s request for Philemon to prepare lodgings, and thus the potential of Paul’s physical presence, may be further impetus to welcome Onesimus as a brother.

Finally, as he frequently does, Paul sends greetings from his co-workers, in this case Epaphras, Mark, Aristarchus, Demas and Luke (23–24). Significantly, Paul mentions all of them, along with Onesimus, in his letter to Colossae where Philemon may have lived as well (Colossians 1:7; 4:9, 10, 12, 14). Significantly, Paul sent Tychicus back to Colossae with Onesimus, with news of Paul’s “affairs” and “circumstances” (Colossians 4:7–9). In the context of their arrival with his letter, Paul affirms Onesimus as “our faithful and beloved brother who is one of your number” (4:9).

First-century letters contain much valuable information in familiar forms. Unlike modern letters, however, they don’t give us dates that would tell us the sequential timing of the letters. Further, God decided not to gives us a separate inspired revelation of Philemon’s response to Paul’s letter.

One positive possibility is apparent from what God does reveal in both letters. Onesimus was not a Christian when he fled. He became a brother in Christ after meeting Paul in his imprisonment (literally “bonds,” Philemon 10). To the Colossian church, Paul identifies Onesimus as “one of your number” (literally “he is of you”; 4:9). At the very least with the arrival of Paul’s letter to the Colossians, Onesimus is considered as, and welcomed as, a brother in Christ of their congregation. The Onesimus who left is not the one who returned. The former died, the latter lives forever. The “useless” one becomes “useful” (Onesimus) undoubtedly through both the power of the gospel and the influence of its champion Paul on Onesimus’ character.

Further, Paul underscores his confidence in Philemon to rise above retribution based on the quality of his character – and – notably his “love, and of the faith, chief you have toward the Lord Jesus, and toward all the saints” of whom Onesimus is now one (Philemon 5).

It leaves open the question as to why Onesimus would have fled if it wasn’t for Philemon being a harsh master. There were many other ways for first-century slaves to secure their freedom (manumission), for example: good behaviour, saving up wages in trust (peculium) to purchase it, saving their owners from danger, a request to their owners for change in their legal status. Paul does not ask for Onesimus’s legal freedom explicitly. Regardless of Onesimus’ motive, the thrust of both letters is that Paul anticipates more than reconciliation of Philemon and Onesimus, total acceptance of each other as brothers free in Christ.

In this regard, Paul’s final words to Philemon express the foundation of his appeal: “The grace of our Lord Jesus Christ be with your spirit.”(25). As he frequently frames his teachings, convictions, exhortations and instructions with God’s grace Paul does so for Philemon in verses 3 and 25. God’s grace is the unmerited gift of His favour in Christ whom Paul mentions nine times (1, 3, 5, 6, 8, 16, 20, 23, 25). His grace is one key element of our salvation. Paul depends on it and so does Philemon. As God extends His grace to all, Paul appeals to Philemon to extend his forgiving grace to Onesimus.

Paul’s gracious letter of appeal is a masterpiece of tact and gospel love in only 335 words, one quarter as long as this article. His gospel teachings (doctrines) are not explicit as in his other letters but they are there implicitly, embodied in human hearts and lives. As Jesus is the implicit embodiment, the incarnation, of truth, life and the ideal way to live (John 14:6), the value of Philemon as a letter is in the power of its example of what grace in Christ and reconciliation of Christians truly look like. It is conflict management, rather the aversion of conflict, at its very best. Beyond its value to Philemon and Onesimus, it had tremendous value to the church in Colossae and indeed can for all churches of Christ since.

When someone in the ancient world wanted to introduce two people from a distance, they could send a letter of commendation (2 Corinthians 3:1) similar to the way we use reference letters today. These letters go beyond mere introduction to positive exposition of quality character traits embodied in life. Paul’s letter precedes him and introduces Philemon to his new brother Onesimus with the confidence that as the gospel of Christ transformed them individually it will transform their new relationship in Him.