God Created and All Was Good 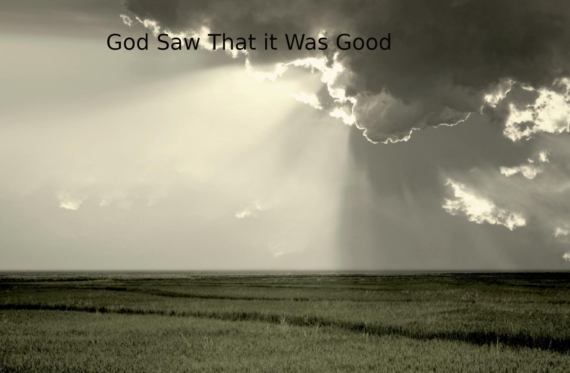 We come to the first chapter of Genesis with our own questions and concerns. This is the wrong. To understand the Bible, we must listen to what God is saying. We should not speculate about what he might say in answer to questions that he never chose to answer.

What difference does it make?

We know that “In the beginning God created the heavens and the earth.” We know that; but perhaps we have not considered the difference it should make in our lives.

There are, of course, other explanations of our existence. We can choose to believe that we emerged from meaningless slime. Some people desire this as it seems to grant freedom. Atheists do not have to concern themselves with answering to God. They can do as they please. They do not fear eternal punishment for their wrongdoings. But they pay for their freedom with pointlessness, purposeless lives.

We should not refuse to uphold the implications of the position we choose to affirm.

If a person chooses to uphold the atheistic position, he has no claim on morality, purpose, or future. If we exist because of random chance, then we are nothing. Nothing done to us can be good or evil, right or wrong. We can claim no rights for ourselves or anyone else. If we exist by chance, we are insignificant; and what happens to us is insignificant. Atheists do not like to admit this.

On the other hand, if we choose to claim the biblical theistic position, then we are not our own. We belong to the God who created us. Nothing we do can be done without reference to him. Every choice we make must be made according to his will. Sadly, many Christians do not like to admit this. Many who claim to believe that God has created them never bother to ask what purpose he had in creating. Many who claim to believe the Genesis account of creation, live as if they created themselves. They live as if they are free to choose without reference to God’s will or purpose for their lives.

A way of life

Christianity should be a way of life. Instead, many have made their faith merely a small part of their life. Such a religion is not Christianity at all. A biblical view of creation demands that all of life be lived in submission to God. Since he is creator of all, the earth belongs to God (Psalm 24). We may hold a title on a portion of it according to the earthly government. But ultimately, “The earth is the Lord’s and the fullness thereof, the world and those who dwell therein, for he has founded it upon the seas and established it upon the rivers.” Therefore, how we use the earth indicates what we really think of God. Those who misuse the earth show that they do not really love and respect the Lord as creator of the earth.

The New Testament confirms the view that all of life must be lived with the intention of honouring the Lord. Colossians 3:17 tells us, “And whatever you do, in word or deed, do everything in the name of the Lord Jesus, giving thanks to God the Father through him.” A little later the apostle adds, “Whatever you do, work heartily, as for the Lord and not for men, 24 knowing that from the Lord you will receive the inheritance as your reward. You are serving the Lord Christ” (Col 3:23-24). Again, we are being told that everything we do is to be done in a way that honours God.

Not only does Genesis one make our complete dependence on God clear, but it also indicates and emphasises that everything he created was good. He created with purpose. He also created according to a plan.

God could have spoken it all into being in a millisecond if he had chosen to do so. But the description given here is indicating something about how God works and how he wants us to work. The Lord spends three days preparing the habitats, and then three days creating the creatures for each habitat in order.

Certain aspects of the created order were delegated to be governed. The days and seasons are to be “ruled” by the Sun and Moon (15). The earth itself is to be governed by humanity (28).

What implication does this have for us?

We, if we are to be the image of God, ought to function according to plan. When those who claim to believe in the God of the Bible live chaotic, confused lives, they deny by their actions what they claim with their mouths. We are not all going to be equally organised; but Christians ought to be more orderly than non-Christians. Sadly, that is not always the case.

That God’s creation was good is stated repeatedly (10, 12, 18, 25, 31). It is one of two items clearly emphasised in the chapter. This is not an aesthetic judgement. It is a statement of fitness for its purpose, of proper functionality. Creation originally functioned properly with each part fulfilling its purpose perfectly. Yet, this is not what we experience in life. This perfection was not what the first readers of Genesis would have experienced. They also lived in a broken world, a world where nature was sometimes extremely threatening.

The biblical account of creation is, I think, unique in picturing the world as having an original perfection which is then lost. The implication of this teaching is a matter that the Bible will be unfolding from Genesis three all the way to Revelation 22. This is a major theme of the Bible. Our failure to give it adequate consideration has led to confusion and often to a loss of faith.

When we experience a beautiful day, people credit it to “mother nature.” But if a storm destroys homes the same people call that “an act of God.” Thus, the good in our world is credited to a pagan concept (“mother nature”) while the bad is blamed on God.

The biblical account would lead us to credit God with the good. The source of the evil in our world, the cause of the flaws in nature, is not mentioned here in chapter one. That will come later.

According to verses 26-29, God set humanity apart from the rest of creation. All of creation is good, but only humans (male and female) are the image of God.

Many aspects of the image of God have been debated. A couple of things seem clear.

First, we note that God is creative and that humans are also creative. Animals live primarily by instinct. Even the most intelligent of animals are very limited in their ability to work out problems and construct tools for overcoming obstacles. But humans are amazingly creative. From childhood we create. Sadly, even in our evil we are creative.

Second, we note that humans are the only earthly creatures given responsibilities according to this passage. We are to care for the earth as well as use it. Neglect of this responsibility is one of the great failings of humans. Instead of seeing ourselves as stewards of God’s creation, we have called ourselves “consumers.” And, we have seemingly set out to consume what God has created, instead of caring for it, as this passage indicates we should.

The blessing of rest

Certainly, we are not under the Mosaic Law. Galatians, Romans, and Hebrews all make that clear. But we are not really looking at the Mosaic Law in Genesis 2:1-3. We are looking at the creation account. What is described here took place long before Moses. What we learn here about God, and the image of God, is still valid — not in a legalistic sense, but in a very practical way.

It is interesting to see how different people view the idea of a day of rest. In most parts of the Western world, it was once illegal for businesses to be open seven days per week. But that came to be viewed as a restriction on our freedoms, a needless and annoying restriction, a case of religious people interfering in the lives of the irreligious.

Interestingly, when Canada did away with its enforced day of rest it was viewed in the opposite way by at least one editorial writer. An editorial in the London, Ontario, newspaper stated that the law forbidding businesses from opening on Sunday was clearly an issue that involved the separation of church and state. According to the writer, the worship of money had become the national religion; and people were tired of the government interfering in their desire to practice their materialistic religion seven days per week.

It is true that we are not under a restrictive Sabbath law, but we should stop to consider the blessing of rest. Times of rest are beneficial to us.

By appropriate rest we not only honour God, we also bless others. According to the Ten Commandments as given in Deuteronomy consideration for others was a main reason for the Sabbath command (Dt 5:14). Those who work too much are hard on everyone around them, not just on themselves. They tend to overwork their employees, their family, and even their animals.

Of course, Sabbatarians can be hard on everyone around them too. They work too hard at not working. Such was the case with the Pharisees as is recorded in Luke 6:1-2. No normal person would describe plucking a head of grain and putting the grain in your mouth as “work.” But Pharisees were not normal people. They were more interested in the letter of the law than its intent. God intended the Sabbath law as a blessing to humans, but the Pharisees had turned the blessing into a burden.

By taking appropriate rest we point ourselves and others to heaven. Hebrews 4:9-10 tells us, “So then, there remains a Sabbath rest for the people of God, 10 for whoever has entered God’s rest has also rested from his works as God did from his.” This passage is encouraging us to look forward to eternity as a time of continued Sabbath rest. But how can we do that if we have never allowed ourselves times of rest, reflection, and worship here on earth? How, if we feel that we must always be busy, are we resting in God?

PrevPreviousJacob’s Journeys: Seeking a Wife and Family, Finding God
NextGenesis: The Beginning of the StoryNext