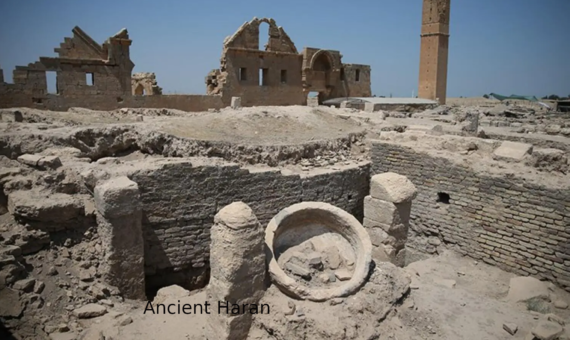 Jacob’s grandfather Abraham was concerned about the potential pitfalls of his son Isaac going on the 1,000 km +/- journey to his ancestors’ homeland in Paddan-aram to seek a wife. So Abraham sent a servant instead.

When the time came for Isaac’s son to seek a wife, Isaac took a totally different approach. He sent Jacob on a solitary journey to Haran, Paddan-aram, to find a wife (Genesis 28:1–7). He sent him with affirmation of God’s promises to his grandfather to make him a great nation and with his blessing which Jacob had stolen from his brother Esau.

Jacob’s mother’s motive for sending him on this journey was quite different. Rebekah told him to flee and seek refuge from Esau’s plot to kill him for stealing his birthright and blessing (Genesis 27:41–45). As part of his deception of his father Isaac, Rebekah put Esau’s best garments on Jacob (Genesis 27:15). Another garment will come to have a profound impact on Jacob’s life later on.

Jacob set out on the first long-distance journey of his life from the family home in Beersheba where his grandfather and grandmother had also lived. Beersheba is at the southern end of the central highlands on the edge of the barren Negev, the south country.

Jacob travelled north uphill along the central highlands, a rugged route. The Mediterranean plains along the ancient well-worn international trade route or the eastern trade route beyond the Jordan Valley could have been easier. This rugged way through Canaan came to be known as the way of the patriarchs, the highlands ridge road, the watershed route.

Something surprising happened along the way that was not on Jacob’s initial dual-purpose agenda of fleeing from his brother and finding a wife. At one of his first overnight stops, he lay down on a stone pillow and dreamt of the Lord Yahweh standing at the top of a ladder upon which His angels were ascending and descending (Genesis 28:10–22). God identified Himself, “‘I am the LORD, the God of your father Abraham and the God of Isaac; the land on which you lie, I will give to you and to your descendants.’” In addition to the land, God passed on His other promises to Abraham to Jacob:

* “‘I am with you wherever you go, and will bring you back to this land.’”

* took his stone pillow and “set it up as a pillar, and poured oil on its top,”

* “called the name of that place Bethel’ (house of God),”

* “made a vow saying, ‘If God will be with me and will keep me on this journey…

and I return to my father’s house in safety, then:

* this stone…. will be God’s house

So Jacob unexpectedly met God who was waiting for Him. The LORD proactively surprised Jacob by granting him the same promises and covenant of faith He gave his grandfather and father.

Jacob continued. His two initial objectives were met beyond his expectations. He finds refuge with uncle Laban in Haran. Jacob finds two wives. He has 12 sons and a daughter by Rachel and Leah and their maids. He accumulates wealth in patriarchal terms, large flocks and household. God was behind it all. Jacob arrived alone but has become father of a great family. Again, God has been proactive in meeting and surpassing Jacob’s needs through several surprises along the way over the two decades he was in Haran.

Jacob begins his second major journey precisely for one of his first two motives. He must take flight again. This time for fear of his uncle Laban for “Jacob saw the face of Laban, and behold, it was not friendly toward him as formerly” (31:2). Following a harrowing encounter with his uncle, they make peace. Jacob sets up another pillar, Mizpah, the watchtower, “May the LORD watch between you and me when we are hidden (away) from one another” (31:49).

As “Jacob went on his way, the angel of the LORD met him” (32:1). Jacob has another surprise meeting with one of God’s divine messengers. As he named Bethel, he named this place Mahanaim, two companies (32:2), reflecting God’s providential blessing and fulfilment of His promise to multiply Jacob to bless the nations.

Jacob braces himself and prepares to meet Esau by sending his family and gifts ahead of him as peace offerings. They cross the Jabbok gorge, one of four major routes down to the Jordan rift valley and then up to the way of the patriarchs back home.

Alone again for a while as at first, God proactively surprises Jacob again: “A man wrestled with him until daybreak” (32:24). Several important things happen. Jacob perseveres and prevails but the man “touched the socket of his thigh, so the socket of his thigh was dislocated” (32:25). Jacob asked the man for a blessing and got one. He changed Jacob’s name which meant, “one who grabs the heel,” “supplanter,” to Israel, “he who strives with God” (32:28). For the third time, Jacob names the place where he meets God and his messengers, this time, Peniel (face of God; 32:30). “Now the sun rose upon him just as he crossed over Penuel (face of God), and he was limping as he went” (32:31). Jacob was injured, handicapped physically, but transformed spiritually into a strong man of God. His LORD has been faithful. He brought him back to the Promised Land a great company to become a great nation of twelve tribes and He restored his relationship with his brother for the moment.

Two major journeys, one solo, one as a great wealthy company. Three encounters with God. Three new place names. A limping but spiritually transformed man. Seeking a wife and a family and finding God along the way.

Jacob had one more major journey to make that would transform his relationship with God even further. It involved two surprises that would shake Jacob to the depth of his soul.

Jacob favoured Joseph his firstborn of Rachel, the love of his life. The jealousy of Joseph’s brothers over his favoured status and prophetic dreams of his future superiority lead them to throw him into a pit (Genesis 37). When Midianite traders pulled Joseph out of the pit and sold him to Ishmaelites bound for Egypt, Joseph’s brothers assumed he was dead. They devised a scheme to deceive their father using a garment. They dipped Joseph’s many-coloured coat in the blood of a goat as false evidence of Joseph’s assumed death. Providentially, and ironically, Jacob who had deceived his father with a garment, was plunged into twenty-two years of despair by his sons’ deception using Joseph’s garment.

The next major surprise for Jacob was the famine that found Israel’s sons travelling to Egypt for food, discovering Joseph was alive as second in command to Pharaoh, and returning to tell the good news to their father. They came back to Jacob with a revelation from Joseph of why all this happened: “it was not you who sent me hear but God, for God sent me before you to preserve life!” (Genesis 45:5).

As on his former journeys, God is waiting and appears to Jacob again, this time while he was heading south to Egypt at Beersheba from where he had headed north on his long journey to Haran: “God spoke to Israel in visions of the night…. I will make you a great nation there. I will go down with you to Egypt, and I will also surely bring you up again” (Genesis 46:2b, 3b, 4a).

Joseph lived 17 years more to bless his sons and grandsons by Joseph. Nevertheless, when Pharaoh asked Jacob about his life, he said his years were few and unpleasant (literally bad, evil), short compared to his fathers (Genesis 47:9). God, however, was working, faithful to His promise. Israel entered Egypt as a family and left a great multitude that became a great nation.

Lessons from Jacob and His Journeys

God is always out front. He’s ahead of us working on His eternal purposes through us if we are willing to engage with Him.

Jacob engaged with God tenaciously and courageously. He persevered. God used each encounter to take Jacob to a deeper level of understanding about who He is and His eternal plans.

Jacob responded. He made special ways of remembering his experiences of God and committed himself to be faithful as God constantly proves Himself faithful.

Walking with God has many surprises. If we are willing to set out with God’s promises and purposes foremost in our minds, the surprises will lead to spiritual growth and blessings for others.

God may take one of His people on a very different route than another.

We may set out with good motives or poor but God can and will correct our course.

We may perceive progress to be slow. We may be discouraged. God is always working. We must trust and wait upon Him for His time. God may surprise us by surpassing our expectations as He did for Jacob.

Jacob was a wounded leader but stronger spiritually. Life is short. Our bodies grow old. Our spirits grow stronger.

Though the coastal plains and popular routes are easier, God’s way can be rugged, like the way of the patriarchs on the ridge road, but it always leads to bigger and better things.

God transforms who we are. Jacob became Israel. Our identities are bound up in God and His people.

We are on a journey. God is out front ahead of us. He wants us engaged in His mission to save life, to bring others into a new covenant relationship with Him and to inherit the awesome promises He gave our inspiring ancestors of faith.