Genesis: The Beginning of the Story 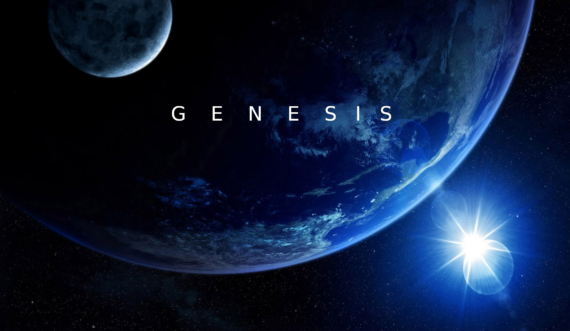 Genesis is the beginning of the Biblical story that starts with the creation of the heavens and the earth and ends with the vision of a new heaven and earth. Genesis introduces the main characters and main themes of the Biblical drama.

We need Genesis. It sets the stage and provides the fundamental principles for understanding the spiritual history of the universe and our place in it as the people of God. Genesis tells us how the world began, what went wrong, and how God set about making things right again. Genesis gives us the basic themes that define our world and ourselves: God, creation, human beings made in the image of God, male and female, marriage, sin, hope, and covenant.

Genesis 1 provides the broad sweep of creation, Genesis 2 the narrow focus on humans and their place in the created order. It all begins with God the all-powerful creator, wise, winsome, caring. God effortlessly speaks the worlds into existence. He is the main character, the chief actor of the entire Biblical narrative.

Genesis 1 is majestic, stylized, almost poetic in its language. On the first three days God forms the light, water, skies, dry land, and vegetation. On the next three days He fills what he has formed with sun, moon, stars, birds, fish, land animals, and humans. There are parallels and symmetry between what is formed and what fills it.

Human beings stand as the pinnacle of creation (1:26–27). They alone are said to be made in the image of God, a fact profound in its implications about the nature and significance of humans. Human beings as God’s image-bearers are his under-rulers, stewards of creation. They are precious. They stand in contrast to humans in pagan mythology who were created in order to provide food through their sacrifices to the gods.

On the seventh day God rests, he ceases from his work, setting a pattern for humans to work six days and rest on one.

Throughout Genesis 1 we are told that as God went about his creative work, he saw that what he made was “good.” When He finished creation he saw that it all was “very good.”

Genesis 2 focuses on the creation of men and women. Man was created first and immediately put to work tending the Garden of Eden. Work is seen as a blessing, not a curse. The repeated refrain that what God had created was good is now broken. God sees that it is “not good” for the man to be alone (2:18). God sets about to rectify the situation. He brings the animals to the man to see what he will name them (2:19). Man gives names to all the animals, but none is found who is a suitable helper for the man—his equal (2:20). So God takes a rib from the man and fashions the first woman to be the man’s complement. As Susan Foh says, animals are the helpers inferior to man; God is the helper superior to man; woman is the helper equal to man (cf. 2:18-20; Exodus 18:4; Psalm 10:14; Psalm 118:7). Man was created first and given charge of the garden before the creation of woman. Man’s priority in creation indicates his spiritual leadership but not his superiority.

How the World Went Wrong (Genesis 3–4)

When Satan, in the guise of a serpent, tempts the humans he comes to the woman first. Satan tempts Eve, and Adam, the spiritual leader, does nothing.

Satan offers the universal and greatest temptation of all—to be one’s own god. Eve falls; Adam falls; creation falls. God confronts the couple, coming first to Adam, the failed spiritual leader, and then to Eve. Sin has entered the world and the world is no longer what it was meant to be. However, in the first dim hope God promises one will come who will crush the serpent’s head.

Everything unravels in the world and for the next eight chapters of Genesis we see failure after failure of human beings to get their lives right before God. The sin of Adam and Eve is repeated with increasing velocity. Adam and Eve have two sons—Cain and Abel. Both make an offering to God. Abel in faith gives his best; Cain gives less than his best (4:3–5). God accepts Abel’s offering but not Cain’s. Cain is angry and kills his brother.

The line of Cain produces Lamech, a violent man. He marries two women, the first example of polygamy in the Bible, a violation of the one-man-one-woman relationship envisioned at creation. Lamech brags to his wives about how tough he is.

Adam and Eve have another son Seth who forms a righteous line, in contrast to the evil line of Cain (4:25-26). At that time people begin to call on the name of the Lord. This gives two hopeful notes in an evil time.

Human society continues to degenerate until God decides to wipe them out and start over. He will start over with Noah, the one righteous man he found, and Noah’s family. Noah is faithful and obedient. The world is destroyed in a flood, but Noah and his family are saved a in a boat designed by God. After the flood Noah leaves the boat and plants a vineyard, makes wine, gets drunk, and passes out. Noah’s son Ham dishonours his drunken father and Noah curses his line. The cycle of evil begins to repeat itself. This section of Genesis ends with the account of the tower of Babel, in which human pride is pitted against God. God wins.

Now God steps in to make things right. He chooses the patriarchs Abraham, Isaac, and Jacob to begin the line through whom Jesus the Messiah will come.

God calls Abram (later renamed Abraham by God) (12:1–3) to leave his land, people, and extended family. God promises Abraham among other things that all people on earth will be blessed through him.

God’s call to Abraham, Isaac, and Jacob was not based on their goodness, but on God’s grace. All three men were deeply flawed. Abraham put his wife into compromising situations in order to save himself and had a son by his wife’s maid servant. And yet he was a man of faith to whom God reckoned righteousness before the Law because of his belief (15:6). He grew over time to be courageous, unselfish, and a powerful intercessor. In his final and greatest test, Abraham showed himself willing to surrender his greatest treasure in obedience to God (22:1–18).

Isaac was also flawed, lying to protect himself, showing favouritism to one son over another, and being petty. And yet God’s plan moved forward in spite of the failing of his chosen people.

Jacob was perhaps the most flawed of all. He was a conniver and trickster. He took advantage of his brother and deceived his father in order to get ahead. But Jacob grew over time as he struggled with God both figuratively and literally (cf. 32:22–32). Jacob’s name was changed by God to Israel and he had twelve sons who became the twelve tribes of Israel, thus setting the stage for the rest of the story of redemption.

Most importantly the New Testament writers go back to Genesis for Jesus. We are made in the