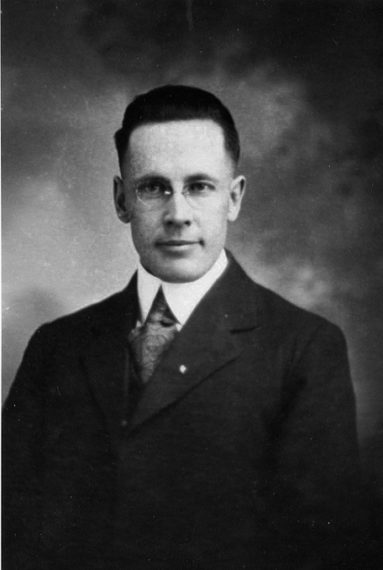 Recently a friend forwarded this picture, without a caption, but with the question. “Guess who?” I responded immediately, “Charles Gordon McPhee.” He answered, “Well done. He baptized me. ”At that moment I knew that it was time to refresh our collective memory of C. G. McPhee, Canadian preacher extraordinaire, of the 20th century.

I will first share my personal memories, and then attempt a more general recollection of Gordon’s life and ministry.

During the summers of 1950-52, it was my privilege to serve as “sports director” at Omagh Bible School under the direction of C. G. McPhee. I and the campers viewed Brother McPhee as “principal” in those days. Thus, began my lifetime association with Charles Gordon McPhee.

The vision and work of “Omagh Bible School” had been passed on to C. G. McPhee by his predecessor, Raymond Crumbliss, evangelist with the Strathmore Church of Christ in Toronto—who had returned to Alabama in August, 1942. Crumbliss had worked in the early years when “Omagh” was transitioning from a summer country experience for city kids, to a camp, then to a summer Bible “school.” McPhee inherited this vision, which he pursued whenever he served Omagh as “principal” during the next decade and a half.

As post-war teenagers opted increasingly for summer employment, the age of young people at Omagh became younger, “Omagh Bible School” reverted to being “Camp Omagh.” Nevertheless, the vision of a Bible College in eastern Canada remained and grew.

In the early days of the college, C. G. McPhee traveled often in the U.S. to raise funds for G.L.C.C. He met and became friends with Tom Beam of Oklahoma City, OK. Beam’s business was manufacturing seat belts for trucks, and also had interests in the oil industry. His early attraction to GLCC was simply the college’s location in Beamsville—the only school located in a town having his namesake, “Beam”! For several years support came regularly to the college from Tom Beam, stopped, and then quietly after a time, began again. Near the end of Mr. Beam’s career, by now in the 1980s, his continuing gifts made possible the purchase of nineteen acres of land in Beamsville, property that joined the college campus, and extended to the corner of John St. and Bartlett Rd. This property was secured for the anticipated future needs of the college level program. As the hoped-for development faded, that asset saved the high school from closing during a difficult period in the nineties. Gordon McPhee’s influence lives on at Great Lakes even today!

Back to those earlier years! According to a diary kept by C. G., he and his wife, Grace, in early 1952 went to Oklahoma and Texas, fundraising for GLCC. While in Abilene, he visited the campus of Abilene Christian College. He wrote: “Enjoyed visiting with many students. Jeff Ellis was especially happy.” Then that fall of 1952, Doreen Begley (of Toronto) having also become a student at Abilene Christian, there we made plans for our wedding: we invited C. G. McPhee to perform our wedding service, which took place at the Strathmore church, in Toronto, on December 27.

In February, 1954. C. G. McPhee was again traveling for GLCC, also with his wife, Grace. They included a visit to Abilene Christian College to attend some of the Bible lectures of that year. As it was my last year of college at Abilene, C. G. took time to visit me and to “recruit” me as a prospect for GLCC. The McPhees were also able to visit my wife Doreen and our new-born daughter, Elizabeth, at the St. Ann hospital, in Abilene. Beth had arrived on the 25th of that month, the last night of the Bible lectures. Then, later, in the Spring, I received a letter from Brother McPhee, again urging my joining the GLCC teaching staff upon graduating. (The previous day I had received a letter that put an end to my hoped-for plans to preach and study in Connecticut!) He wrote, “Your MA degree in Bible will be important as we will soon develop our college Bible program.” With this encouragement, I with my wife and family arrived in Beamsville in late August, 1954, prepared to teach Bible and History, high school and college.

A month passed, and then the unthinkable happened: the GLCC board announced that C. G. McPhee would retire from his position as president! Sometime later, he stated: “It was deemed advisable to terminate my connection with the school as president and return to church work completely. This I have done for 40 years. I believe the best years of my life as a Gospel preacher lie ahead of me.”

The years passed. Bruce Merritt became president, serving until 1961. His brother, Roy, in 1969, became Dean of the Great Lake’s new Faculty of Bible and Missions. In 1970, the carriage hall of theformer Gibson estate, that had been converted to the dining hall/ kitchen, dormitory, and staff apartment for school use, was restructured as the Bible building for the Bible college. Offices and a free-standing classroom were added. The complex was designated “McPhee Hall” in honour of Charles Gordon McPhee!

The latest development of interest in this recital: the archives of the Canadian Churches of Christ Historical Society were moved in August, 2018, from Meaford to Beamsville, and relocated on the campus of the Great Lakes Christian High School, to the refurbished ($30,000) former staff apartment, of McPhee Hall!

C. G. McPhee retired in 1966, at age 74, in St Catharines, where our association continued, especially on the golf course at St Anns!

Charles Gordon McPhee passed away to his award in heaven on November 27, 1979, 87 years of age.

It was my privilege to present the eulogy at Gordon’s funeral. Included was this recollection: “…this quality of sadness was no stranger to Gordon McPhee, for he ministered to many, many families in just such circumstances. While he did not carry his emotions on his sleeve and was not what you would call a sentimentalist, he did care deeply about other’s grief. An indelible memory takes me back to my first staff meeting at GLCC in ’54, held under his chairmanship. Word of the death of a friend in Meaford came while the meeting was in progress. Tears filled his eyes. The meeting was temporarily adjourned. After a time for composure to be regained and arrangements to be made, we went back to work. Here was a man of compassion, sympathetic to the burdens people bear.

PrevPreviousJesus Heads to Jerusalem
NextWhat Should Christians Learn from the Sabbath?Next