What Should Christians Learn from the Sabbath? 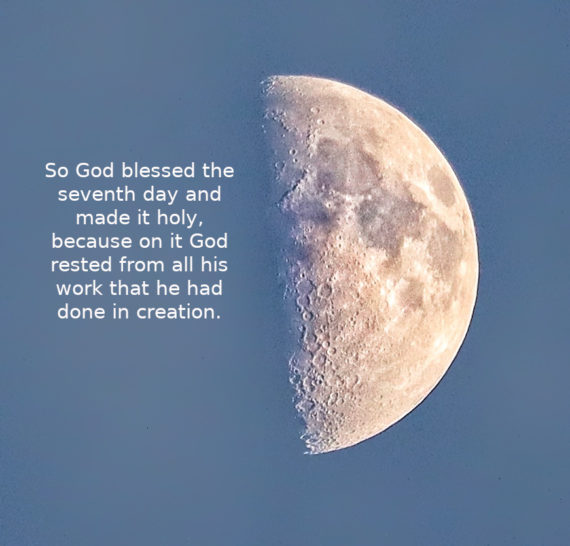 A previous article considered tithing, which was a prominent part of Israelite religion but also antedated the Law of Moses, and a second article was promised about the Sabbath, which also was and is an identifying mark of Judaism but which also antedated the Law of Moses. The word Sabbath in both English and Greek is a transliteration of the Hebrew word, sabbat, from a root meaning “to cease,” or “to desist.” According to the Fourth Commandment in the Decalogue (Exodus 20:8-11), on the seventh day of the week the Israelites were to keep the Sabbath holy by desisting from their work.

But this was not the first reference to observing the seventh day of the week in this way. Shortly before the Ten Commandments were given on Sinai, when the Lord gave the Israelites manna to eat during their time in the wilderness, they were told to gather each day enough manna for that day, but on the sixth day to gather twice as much, for there would be none available on the seventh day. As Moses explained to them, that day was “a Sabbath to the Lord,” so they would not find on that day any manna in the field. “Six days you shall gather it, but on the seventh day, which is a Sabbath, there will be none” (Exodus 16:25-26). This entire incident reads as though desisting from work on the seventh day was not a strange concept to the people and that there may have been other times when they rested on that day. Whatever the case, this example with the manna antedated the giving of the law on Sinai.

When rest from labour was ordained in the Ten Commandments it was stated clearly that after God had completed his work of creation in six days he rested on the seventh and for this reason he blessed it and made it holy. This is why his people were to remember it and to keep it holy (Exodus 20:8-11). What God was teaching them about Sabbath observance is further spelled out in Exodus 31:12-17, where God told them that keeping the Sabbath was a sign between God and Israel “that you may know that I, the Lord sanctify you” (make you holy). It was also a sign reminding them that “in six days the Lord made heaven and earth, and on the seventh day he rested and was refreshed.” For the day to be made holy meant that it was observed as a special day, different from other days. The only requirements specified for keeping it holy was to remember what the day was all about and to refrain from all work. It is important to note that, as originally given, there was no requirement to worship because it was the Sabbath. It was much later that synagogue service became part of observance.

How Christians have looked at the Sabbath has varied through the centuries. Because the Sabbath commandment is in the Decalogue, this has seemed to many to give it special importance. Some, like Seventh Day Adventists, have set it apart as the Christian day of worship. Much more common has been the practice of many churches to make Sunday the Christian Sabbath. Apparently in New Testament times some made observance of the Sabbath and other Jewish practices a requirement of Christians, for Paul told the Colossian Christians not to let anyone judge them “in questions of food and drink, or with regard to a festival or a new moon or a Sabbath” (Colossians 2:16-17). He said that these Jewish ordinances were “a shadow of the things to come, but the substance belongs to Christ.”

However, the apostle did not have a problem with those who observed special days as a matter between them and the Lord. In a warning against quarrelling over opinions, he recognized that “one person esteems one day as better than another, while another esteems all days alike. Each one should be fully convinced in his own mind. The one who observes the day, observes it in honour of the Lord” (Romans 14:5-6). It is not difficult to imagine that at that time some converts from Judaism personally observed the Sabbath. The principles Paul sets forth here are equally applicable to differing views about whether to observe religious holidays like Christmas or Easter and, if so, how.

It would be going too far, then, to make Sabbath observance a requirement for Christians. There is no indication that the New Testament ever does this. But there is a recognition that the Jewish Sabbath foreshadowed something far greater than refraining from work on the seventh day. The writer of Hebrews, in an exposition of the 95th Psalm, speaks of a place of rest provided by God which some could not enter because of disobedience. But, as he says, the psalmist affirmed that this rest is still available and thus “there remains a Sabbath rest for the people of God” and Christians should “strive to enter that rest” (Hebrews 4:1-11). Clearly, that rest is eternal salvation, aptly referred to in Revelation 14:13 as the time and place where those who “die in the Lord” are blessed by being able to “rest from their labours, for their deeds follow them.’”

Thus, for Christians, scriptural teaching about the Sabbath takes on richer meaning. To Israel, the special day looked back to God resting after fully completing his creative activity, and so, as a sign that they were his people, they rested one day a week from labour that was often hard and futile because of the curse of sin. To the Christian, the Sabbath that remains for us not only looks back to the cessation of God’s original creative activity; it also looks forward to God’s new creation, where his people enjoy not merely a temporary rest but one that is complete and eternal.

But this does not exhaust what we can learn about Sabbath teaching. As Jesus said, “The Sabbath was made for man, not man for the Sabbath” (Mark 2:27). The Pharisees of Jesus’ time had it backwards and made the Sabbath an onerous burden for God’s people, with all kinds of rules about what people could do and could not do on that day. Originally, the Sabbath was designed to free people from work one day a week. We all need a time of rest, for the curse of sin (Genesis 3:17-19) has not only made much of our work toilsome (“by the sweat of your face”) but often futile (“thorns and thistles it shall bring forth to you”). Thus, for all of us, rest is important. Jesus himself recognized that people cannot work all the time. After his apostles returned from a preaching mission and when so many were coming and going that they could not even find time for a leisurely meal, Jesus said to them, “Come away by yourselves to a desolate place and rest a while” (Mark 6:30-31).

But not only did the original Sabbath law remind people that rest is needed for refreshment and renewal; it also is was a reminder that there is more to life than constantly toiling whether out of necessity or from an incessant desire to have more. In our culture there are few days when stores and factories are closed, but when they are it is a welcome reminder that it is good to have a time when we are not consumed with making money or spending it.

The Sabbath law was also a reminder that time, like all else we think we have, belongs ultimately to God. Just as the tithe, because it was holy, was the Lord’s (Leviticus 27:30), so the seventh day, because it was holy, was also his. For Christians, who have no one holy day, every day is holy and should be used in a way that honours God. Paul, said, “Look carefully then how you walk, not as unwise but as wise, making the best use of the time, because the days are evil” (Ephesians 5:15-16).

Finally, both the Jewish Sabbath and the Sabbath that awaits us in eternity are patterned after God’s example. He not only rested after he completed his creative work; he also had the satisfaction of knowing that all that he did in creation was good. While we will often have to rest in the midst of our labours, the most satisfying rest comes after we have fully completed our work, especially if what we do has been done well. We enjoy a foretaste of this satisfaction when we complete some difficult and vital task in this life, but it will be far grander when we are prepared to hear from our Lord, “Well done, good and faithful servant” (Matthew 25:21).

Thus, even though we are not subject to the same kind of Sabbath law as were the Jews, there is much to learn from this day of rest as we live for God and as we look forward to eternity, to the full realization of the rest God has in store for us.

(All Bible quotations are from the English Standard Version)