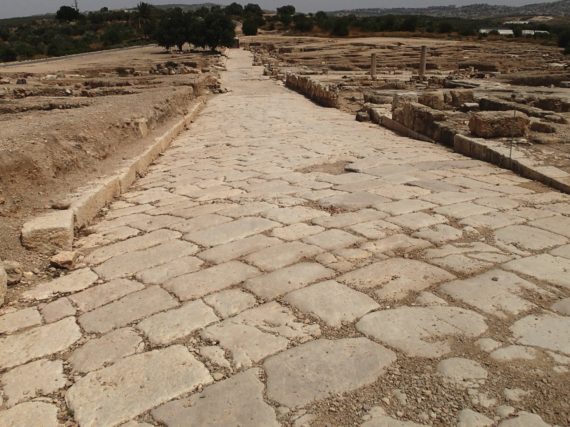 We recognize Matthew, Mark and Luke as the Synoptic Gospels. These messages have a greater concentration of similar content. As you go through Luke however, he does take a teaching direction that we don’t find in the other Gospels. This unique section of Luke begins with the statement, “As the time approached for him to be taken up to heaven, Jesus resolutely set out for Jerusalem.” Luke 9:51 (TNIV)

This road to Jerusalem ends with the Triumphal Entry in Luke 19. These travels are the setting for a large block of teachings that are unique to Luke’s Gospel. His purpose is to teach, and not to give a travelogue, so it’s not in a chronological or geographical sequence. Early on Jesus is closer to Jerusalem, and then later he’s further away. It’s not that Jesus wandered all over the place, but that the message is the critical thread that ties Luke’s message together.

Jesus resolutely set out for Jerusalem. It was not accidental that Jesus was in Jerusalem at the time of his crucifixion. He starts there as opposition begins in Samaria. The opposition continues, and even increases until the grand finale of his death and resurrection.

“The Way of a follower of Jesus” is one of the themes that Luke delivers in this section. See Luke 9:57–62 (TNIV)

57As they were walking along the road, a man said to him, “I will follow you wherever you go.”

58Jesus replied, “Foxes have holes and birds have nests, but the Son of Man has no place to lay his head.”

But he replied, “Lord, first let me go and bury my father.”

60Jesus said to him, “Let the dead bury their own dead, but you go and proclaim the kingdom of God.”

61Still another said, “I will follow you, Lord; but first let me go back and say good-by to my family.”

62Jesus replied, “No one who puts a hand to the plow and looks back is fit for service in the kingdom of God.”

What is a 21st Century Christian to take from these words of Jesus? We have the security of a home to live in. Even so, our expectations of a “normal life” are to take second place to the commitment to the Son of Man. Life is to be more than real estate transactions, investments, our jobs, and seeing that our children are in all of the enrichment activities that we can provide for them. These cultural values can encompass us to the point that it seems that they are all that matters, and if not all, at least the most important things.

Michael Wilcock says in his commentary, The Message of Luke, “Now we are not to misunderstand this. Ordinary security, accepted customs, home ties, are still the norm. Jesus approves of them, since they are part and parcel of the social life of mankind as his Father created it, and that is normally the way his followers are led to live. But the crucial question, and the one he is asking here, concerns what happens at the parting of the ways. ‘Suppose I were to lead you towards work in which your income would be lower, your prospects (humanly speaking) more uncertain, and your accustomed standard of living non-existent? Or suppose I were to ask you to do something for me which according to most people of your class and background is simply ‘not done’? Or suppose I were to summon you to my service with such a peremptory call that your nearest and dearest would have to be left without an explanation? Would you even then come my way?’”

Jesus challenges us to make it our first priority to follow him. It’s not just something that we fit in among all of the other things in our lives. He wants us to make him first, last, and all. Then we fit the other things around our commitment to and our faith in him. The call that Jesus gave to the apostles is the one he has for us. “Follow me.”

After this the Lord appointed seventy-two others and sent them two by two ahead of him to every town and place where he was about to go. 2He told them, “The harvest is plentiful, but the workers are few. Ask the Lord of the harvest, therefore, to send out workers into his harvest field. 3Go! I am sending you out like lambs among wolves. 4Do not take a purse or bag or sandals; and do not greet anyone on the road.

5“When you enter a house, first say, ‘Peace to this house.’ 6If the head of the house loves peace, your peace will rest on that house; if not, it will return to you. 7Stay there, eating and drinking whatever they give you, for workers deserve their wages. Do not move around from house to house.

13“Woe to you, Chorazin! Woe to you, Bethsaida! For if the miracles that were performed in you had been performed in Tyre and Sidon, they would have repented long ago, sitting in sackcloth and ashes. 14But it will be more bearable for Tyre and Sidon at the judgment than for you. 15And you, Capernaum, will you be lifted up to the skies? No, you will go down to the depths.

Jesus doesn’t send us to places he would not go. Indeed these days, when we go, we learn that Jesus is already there preparing hearts for the harvest. It’s not just a harvest, but a great harvest. In the Parable of the Sower Jesus speaks of seed producing hundred, sixty, or thirty times what was sown in good soil. Is that a good rate of return? Most of us are quite removed from our agrarian roots so we have no idea what to expect. According to the website, “Askinglot.com” if you plant 1.5 bushel of wheat per acre, you can expect up to a 60 bushel per acre yield. That’s 40 times what was planted. It has taken modern farming methods to get the yield that high. My point isn’t that we bone up on our farming skills, but that the harvest Jesus is speaking of is so great that it’s beyond comprehension for his listeners! That’s how God works.

Because the harvest is great, we are to pray for God to send workers into his fields. Note that God sends, and that the fields, and by extension the harvest is his. We pray because there is a need for harvesters, and because of the dangers that they will face are great. Jesus says they will be like lambs among wolves so they need his protection. Jesus also knows that there are many distractions and those who go as harvesters need single mindedness, doing away with distractions so the good news of the kingdom will be proclaimed (5-12).

Our task is sharing the good news whenever we can, to whomever we can. To accomplish this, we don’t have to be great evangelists. I often feel like Moses at the burning bush when it comes to sharing the good news. Like Moses I need to learn that the task isn’t to be done by my talents and skills, but God will do the work on the heart and send someone else (my Aaron) when the time is right.

It is then from two points of view, that the way is described. Jesus calls men to come after him, to be his followers, his disciples and learners; and as they learn, he sends them out ahead of him, to be his heralds, his messengers, and his servants. In both respects the way calls for utter devotion to his cause.

When the disciples returned from their mission, they were full of joy because of what they had accomplished. But Jesus taught them to rejoice because their names were registered in heaven. He focused their attention upon their relationship with God as his followers.

When Jesus was teaching in the home of Mary and Martha, Mary was listening at the feet of Jesus while Martha was busy with preparations. Martha asked Jesus to tell Mary to get up and help her, but Jesus responded that Mary had made the better choice.

There is nothing more important than spending time with Jesus, learning from him and engaging fully in the work that he has sent us to do. In the same way that Jesus turned his face toward Jerusalem and the cross, may we also be willing to do whatever God calls us to do in his service. For there we will find life.