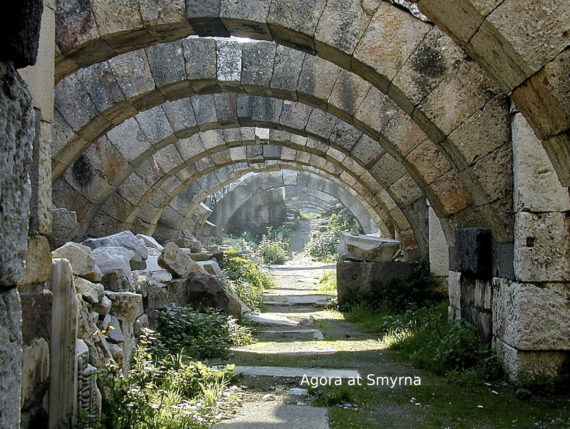 Introduction to Smyrna the “Crown City”

The journey from Ephesus, the destination of Jesus’ first Revelation letter, to Smyrna is about 55km (33 miles) as the crow flies north and slightly west through fertile valleys and over green hills. Over the last rise we would see a panorama of the famous city of Smyrna, “first in Asia in beauty and size.”

Smyrna has an excellent harbour at the east of end of a 64 km (40 mile) long gulf from the deep blue Aegean Sea to the west. Merchants, longshoremen and slaves load ships with goods from the far east via the international trade route which enters Smyrna through through the Hermus Valley from the east via Philadelphia, Sardis and Laodicea. Smyrna’s name may be from the the ancient Greek name for myrrh, a major export of this prosperous city.

Smyrna is surrounded by large rolling hills. Some are quite prominent. Mount Pagos to the southeast overlooks the large Smyrna agora. On and around the Mount Pagos acropolis (literally “top of the city”) are many prominent public buildings: its citadel, temples, porticoes and a 20,000 seat theatre just slightly smaller than the 25,000 seat theatre in Ephesus. Mount Pagos looks like a crown on the head of the city. Smyrna has a reputation as “the crown city.”

Appolonius of Tyana in Anatolian Cappadocia, a contemporary of the beloved Apostle John, wrote of Smyrna, “For though your city is the most beautiful of all cities under the sun, and makes the sea its own, and holds the fountains of the Zephyrus (god of the west wind), yet it is a greater charm to wear a crown of men than a crown of porticoes, for buildings are seen only in their own place, but men are seen everywhere, and make their city as vast as the range of countries which they visit.”

Aelius Aristides of Smyrna later spoke of his city as having the “crown of life” referring to the dominant hilltop acropolis of Mount Pagos metaphorically seen as the crown of a statue whose feet were at the seashore.

As we move into the city we walk along its wide streets laid out in a grid pattern. We come to Smyrna’s most famous street, the “Street of Gold,” which connects the temple of Zeus, the father of the Olympian gods and goddesses, to the temple of Cybele, the Anatolian Phrygian primal mother of the gods and mediator between the living and the dead.

There is also a temple to Dionysus, or Bacchus, as the Romans call him, the god of wine, fertility, religious ecstasy, festivity and theatre. We learn the Smyrneans are fond of worshiping Dionysus. Each spring there is a religious celebration of the renewal of life at which the priests of Dionysus wear crowns and reenact a mock death, burial and resurrection.

There is a temple to Roma, the female deity who personified the city of Rome and symbolized the ideal woman. Smyrna became a loyal ally of Rome in 195 BC. Its citizens built this temple for the worship of the Roma cult, the first of its kind in this region which reflects Smyrna’s loyalty to Rome.

The famous first century BC Roman statesman, orator and skeptic philosopher, Cicero, who served for a time as proconsul of Cilicia, the home province of the Apostle Paul, called Smyrna “one of our most faithful and our most ancient allies.”

We see further evidence of Smyrna’s loyalty to Rome as we learn that in the year of our Lord 26, the Roman senate chose Smyrna over Ephesus and Pergamum as site for this new temple to worship the Emperor Tiberius. This reminds us of the Sabastoi temple back in Ephesus built to honour the Flavian emperors Vespasian, Titus and Domitian. Domitian had his father Vespasian and brother Titus worshiped as gods and delighted himself in being called “Lord” and “Our Master and our God.” Sadly, the Roman province of Asia has been a leader in emperor worship for a long time.

Smyrna is an ancient city. People have lived here since ca. 3000 BC. It was first dominated by Aeolians, one of four ancient Greek tribes. Later it flourished under the Ionians in about the 7th century BC. The Lydians destroyed Smyrna in the 6th century BC reducing it to minor village status for about 300 years. Glorious ancient Smyrna was essentially dead.

Locals think it was Alexander the Great who had a dream in which he conceived a scheme to revive the city in the 330’s. Finally Smyrna was rebuilt by Lysimachus, one of the diadochi, a word meaning successors, the rival generals, families and friends of Alexander who fought for control over his empire after his death. Some see this rebirth of Smyrna as the resurrection of “the crown city,” “the crown of life.”

Smyrna also has a Jewish population of those dispersed around the Mediterranean basin following the deportation and exile to Babylon and the terrible wars in Israel as Alexander’s empire gradually unraveled and the Romans took over. We know the hostility Paul experienced from the unreceptive Jews he encountered throughout the provinces around Anatolia (Asia Minor today).

We see why Smyrna is such a tough place for our first-century brothers and sisters in Christ to be faithful disciples of our Lord Jesus. All around them are material symbols of devotion to Rome, emperor worship, the allure of their pagan gods, the debauchery of Dionysus and the spring death and resurrection rituals of “the crown city.”

We know Jesus is there among His people in Smyrna. Jesus knows all about Smyrna and what is going on. He knows about its reputation as the “crown city,” its rebirth after Alexander, its devotion to Rome and the opposition those assembled in Him receive.

We see why so many of the things Jesus has John write to our brothers and sisters in Smyrna make so much sense to them and are so encouraging. His words counter their culture and triumph over it. Their faithfulness in difficult circumstances has a great reward. The crown Jesus gives us infinitely superior, life forever.

Jesus’ letter to Smyrna is the shortest of His seven, and like Philadelphia, they receive no convicting rebuke from Him.

Jesus’ Letter to His Assembly in Smyrna in Revelation 2:8–11

“And to the angel of the assembly in Smyrna write: The first and the last, who was dead, and has come to life, says this: 9 ‘I know your tribulation and your poverty (but you are rich), and the blasphemy by those who say they are Jews and are not, but are a synagogue of Satan. 10 Do not fear what you are about to suffer. Behold, the devil is about to cast some of you into prison, so that you will be tested, and you will have tribulation for ten days. Be faithful until death, and I will give you the crown of life. 11 He who has an ear, let him hear what the Spirit says to the assemblies. ‘He who overcomes will not be hurt by the second death.’”

Jesus is “The first and the last, who was dead, and has come to life” (2:8). He reminds His people of what He has revealed earlier in His apocalyptic prophetic letter in chapter 1 verses 17 and 18 when our fellow partaker in suffering John first saw his glorious vision of Jesus, “When I saw Him, I fell at His feet like a dead man. And He placed His right hand on me, saying, ‘Do not be afraid; I am the first and the last, 18 and the living One; and I became dead (was dead), and behold, I am*living (alive) forevermore, and I have the keys of death and of Hades.’”

Jesus speaks in emphatic terms reminiscent of His Father, our great “I AM.” Through His servant John He speaks in clear contrasts: first and last, death and life, light and darkness, love and hate.

He is the first, the protos, the primary, the prominence, the first in importance in time and eternity. He is the last, the eschatos, the ultimate, the final, God’s Alpha and Omega, A to Z all inclusive eternal living Word.

Jesus, not Caesar, is the eternal Lord of the universe, the first and last, ever present through the rise and fall of all kingdoms and empires, past, present and future. He is always out front ahead of His people, then now and forever.

He became dead, past tense. He has come to life in a glorious eternal resurrection body. He is the good message, the good news, the gospel Paul taught us: “For I delivered to you as of first importance what I also received, that Christ died for our sins according to the Scriptures, 4 and that He was buried, and that He was raised on the third day according to the Scriptures, 5 and that He appeared to Cephas, then to the twelve” (1 Corinthians 15:3–5).

Jesus was out front of the Smyrneans in suffering, death and resurrection. If they were to die for Him He would be with them, raise them up as the One with authority over life and death, and give them the crown of life.