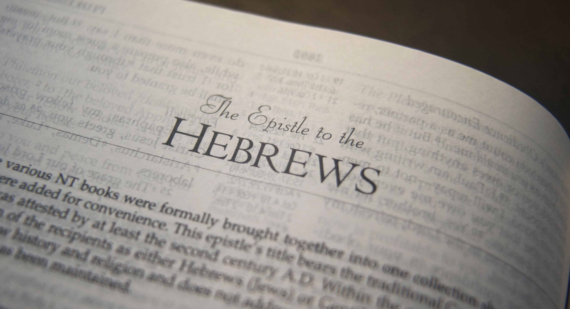 “God, after He spoke long ago to the fathers in the prophets in many portions and in many ways, in these last days has spoken to us in His Son, whom He appointed heir of all things, through whom also He made the world. And He is the radiance of His glory and the exact representation of His nature, and upholds all things by the word of His power. When He had made purification of sins, He sat down at the right hand of the Majesty on high, having become as much better than the angels, as He has inherited a more excellent name than they” (Hebrews 1:1–4, NASB95).

Words denoting oral communication occur seventy-three times in Hebrews, proportionately more frequent than any of the other non-narrative books in the New Testament. In almost every case, God speaks something from the Old Testament or, as the author prefers to call it, the “first covenant” (e.g., 8:7). God’s previous revelation provides the author of Hebrews with material for all three components of his message—theological argumentation (e.g., 1:5–14), positive encouragement (e.g., 13:6), and warning (e.g., 12:25). Thus, the inspiration and continuing authority of God’s previous revelation gives the book persuasive power, yet part of what he proves from God’s previous revelation is that it testifies that the first covenant is not intended to be His only covenant and that the coming covenant will be superior (e.g., 8:8–13). The prologue, quoted above, introduces this topic, and the author returns to it in various ways throughout the book. Notice that, in contrast to many later, the author of Hebrews insists on both the continuity between the parts of God’s revelation and the superiority of the recent one.

The book of Hebrews insists that God’s message to humanity is coherent. According to the prologue, God “spoke” both “long ago to the fathers” (1:1) and “in these last days…to us” (Hebrews 1:2). The author shows that the Old Testament itself points to another covenant beyond itself (e.g., 8:8–13). Indeed, the author points out that the ceremonies of the Mosaic covenant had no meaning without their fulfillment in God’s recent message, in Jesus (e.g., 10:4). Moreover, the Old Testament teems with promises that are not fulfilled within its pages. If God is faithful, as His previous revelation insists (e.g., Deuteronomy 7:9), then the first covenant cannot be the end of the story (cf., e.g., 11:40). Not ononlyly were the Jews still waiting for God to fulfil his messianic promises, but the author’s exposition of Psalm 95 in Hebrews 3 and 4 shows that the land promise that God had made to Abraham, (one of the three basic promises on which the covenant with him and his descendants depended), had only been fulfilled in a preliminary way: “for if Joshua had given them rest,” David would not have warned of the possibility of not entering God’s rest (4:7–8). The unfulfilled promises of God made it clear that He was not finished talking.

Thus a further word from the Lord, in itself implies, the superiority of the more recent message. God does not speak for no reason. Another message implies that He had something important to say that He had not already covered. Moreover, the loose threads from the Old Testament, upon which the author relies to show God’s foreshadowing of the new covenant, testify to the superiority of the new covenant which ties them all together.

To remove all doubt, the prologue explicitly contrasts the stages of God’s revelation in several respects. God’s previous revelation was “long ago to the fathers in the prophets”. The subsequent message arrived “in these last days…to us in His Son.” Mentioning the “last days” raises the spectre of those promises awaiting fulfillment by those familiar with what God had said “to the fathers in the prophets” (cf., e.g., Isaiah 2:2). A message directed “to us” is worthy of at least as much attention as one directed “to the fathers.” A message that came from God’s Son is worthy of more attention than one that came through the prophets, who were His servants (cf., e.g., 1 Kings 14:18).

The kicker, is the element in the first clause that has no equivalent in the second: the author specifies that God’s previous message came “in many portions and in many ways.” God did not give the entire message of the Old Testament to any one person at one time: Abraham got a piece, Moses, a bigger piece, and each of the prophets received their own portions. It took about a thousand years for what we know as the Old Testament to come together. Likewise, God’s message in the Old Testament came “in many ways,” i.e., through many means. Sometimes God spoke directly to the prophets and at other times through dreams or visions. By contrast, God’s message through His Son came all at one time and in one way. God sent Jesus into the world to reveal Him. As the apostle John puts it, “Nobody has seen God at any time; the unique God who was in the bosom of the Father has explained Him” (John 1:18). The author of Hebrews does not provide an equivalent for “at many times and in many ways” because there is none: for when God revealed Himself through His Son, it took place all at one time and through one means.

The rest of the prologue consists of a series of four relative clauses modifying the “Son.” These clauses further explain how God’s message in Jesus goes beyond the previous revelation.

The first and fourth clauses speak of Jesus as Heir: Jesus inherited everything, and is as superior to the angles as is the name that He inherited. Maybe someone can enlighten me, but I have not read anywhere in Scripture that an angel inherited anything. Putting the first and fourth relative clauses together then, Jesus is as much superior to an angel as everything is to nothing. He is infinitely superior. The Jews in the first century believed that God used angels as intermediaries when He gave the Law to Moses. (See Acts 7:38 and Hebrews 2:2) Since Jesus is God and superior to angels, his message must also be superior to theirs. The most important messenger implies the most important message.

The remaining relative clauses relate to the person and work of Jesus. They show Him as a representative of God to humanity and of humanity to God, a theme to which I will return (e.g., 3:1). Jesus is clearly divine because He is involved in creating (1:2) and sustaining (1:3) the world. These are things that only God does. Furthermore, He is “the radiance of God’s glory and the exact representation of His nature” (1:3). The terms “radiance” and “exact representation” have specific connotations. We see the stars through the radiance of their visible light. Stamped upon each coin is the exact shape of the die which made it. Likewise, Jesus has displayed both the glory and the nature of God on earth so that we can know Him (cf. John 1:18). He has shown us what it is that makes God, Himself. In terms of representing man to God, the prologue also portrays Jesus as “making purification for sins,” i.e., serving as a priest, a theme the author covers extensively later in the book.

To summarize, the prologue of Hebrews asserts both the continuity between the stages of God’s revelation and the superiority of the revelation in Jesus. After God spoke, He spoke again in Jesus. This latter message completed a revelation begun long ago and fully revealed who God is. At the heart of who God is, is His desire to have a relationship with us. This motivated Jesus to offer Himself so that we could have an opportunity to be right with God.

God has spoken. Are we listening by “hold[ing] fast the beginning of our assurance firm until the end” (3:14)?

PrevPrevious“Be Faithful Unto Death and I Will Give You the Crown of Life”
NextA Great Commandment: “You Shall Love Your Neighbour as Yourself”Next