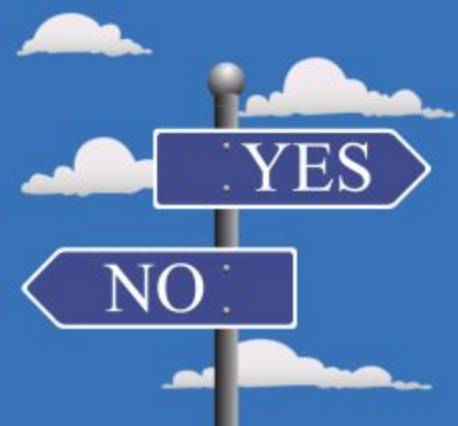 In order to be like our heavenly Father, Jesus teaches us to tell the truth and to keep our promises (Mt. 5:37). The words yes and no are perfectly able to convey meaning, provided that we mean what we say. This is so both for us and for God.

Now it is rare for us to question the will of God when He says ‘yes’. This is especially true when God grants something that we want or commands something with which we agree. We only feel the need to ‘interpret’ a yes, when we prefer a no.

In the first century, Jewish Christians understood that God had said yes to the Gentiles, including them in his offer of salvation in Christ. Some Jewish members of the church wanted to add conditions to God’s salvation. They taught that Gentiles must also be circumcised in order to be saved (Acts 15:1). Others even refused to eat with their Gentile brethren (Gal. 2:11-14). The New Testament condemns those who add conditions to God’s unequivocal yes, and so must we.

The apostle Paul tells us that all of the promises of God find their ‘yes’ (or fulfillment) in Christ (II Cor 1:20). In eternity, God decided to send his Son to earth, to save the world from sin (Eph 1). He even took an oath, so that by two unchangeable things, he might secure the certainty of this decision (Heb 6:17-18). There were no conditions under which God would fail to do what he had decided. God’s yes was unequivocally yes.

When Jesus accomplished all that God had sent him to do, God was empowered to offer salvation from sin. God said ‘yes’ to our need for forgiveness and yes to his own promise to make it available. Yet it turns out, that God’s offer of salvation may only be accepted by complying with the conditions that He has set. Those who reject any of God’s conditions for salvation, are able to turn God’s yes into a no (Acts 13:34).

Naaman was a man to whom God said yes (2nd Kings 5:10). God said yes, but Naaman heard no. God said yes, with conditions attached. Naaman could be healed by doing two things; by going to the Jordan river and dipping seven times in its waters. At first, Naaman refused. As long as he rejected God’s conditions, God’s yes remained a ‘no’. Naaman chose to be offended rather than obedient, and for a time, chose to remain a leper.

When God adds conditions to a ‘yes’, he is not pretending to say yes while intending to say no. God is not the one being weighed in the balances as we make our choice. Divine conditions remind us that God is God and that we are not. Human submission and obedience to the will of God is both reasonable and right. God wishes to bless, but does not force himself upon us. Therefore, even when God says yes to something that we desperately need, he allows us to refuse.

Sometimes God says no, just when we wish that he had said yes. When God forbids without adding conditions, it is hard to be still and know that He is God.

Balaam was a man who refused to take no for an answer. As a prophet of God, he had a reputation for success. His prophecies had all come true, leading to the belief among some that it was Balaam who had it so.

When Israel was encamped in Moabite territory, Balak, the king of the Moabites asked Balaam to come and to curse the Israelites (Numbers 22). When he responded, Balaam said all of the right things, but did not want to do what he said. He claimed, that he would only be able to say, whatever God allowed him to say. Balak replied ‘name your price’. As the price increased, Balaam’s tried harder to ‘seal the deal’.

But God said ‘no’. Do not go for the purpose of cursing Israel. This was an unconditional no. Balaam wanted the money, and kept on asking. What he was after was a qualified no, or a partial yes. A yes to one thing that might lead to another yes..as in ‘yes you can go, and at least for now, you cannot curse’.

What Balaam was not ready for was for God to say, yes you must go and yes you will bless. Since you insist, I will put you where you do not want to be and make you say what you do not want to say. God was so angry with Balaam that He almost killed him on the way to Moab. God turned Balaam’s greed against him.

Once in Moab, Balaam tried three times to curse Israel, but he blessed them instead. In Deuteronomy 23:5, Moses explained to Israel that “…God was unwilling to listen to Balaam, but the Lord your God turned the curse into a blessing for you because the Lord your God loves you”.

Balaam was a wicked prophet who spoke the truth but did not mean it. He said one thing, but did the opposite. We find out in Revelation 2:14 that while Balaam could not curse Israel, he understood that God had already placed Israel under a curse should they become unfaithful. Thus he advised Balak to send young women into the Israelite camp, seducing the men to worship Baal and to engage in sexual immorality. 24,000 Israelites died at Peor because of Balaam. Balaam said yes, when God had said no. He thought that he had outwitted God. When Joshua invaded Canaan, Balaam was killed in the fighting (Josh 13:22). Balaam engaged in a form of madness (2nd Peter 2:16) that tempts us all and which we must resist.

May we resolve, that when God speaks, we will submit, accept and obey.