WHEN HARMONY IS ABSENT 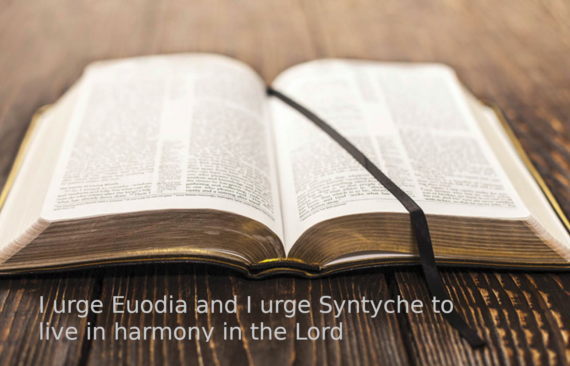 It has often been said that compared to most congregations mentioned in the New Testament, the church at Philippi didn’t seem to have any flaws that Paul needed to correct. The apostle called them his “joy and crown” (4:1). This great congregation was certainly admirable living and working in a community identified as a Roman colony. Opposition and suffering arose from this reality alone (1:28-30).

But were they really flawless?

Paul named two Christians whose behaviour was a blotch on the record of this fair church: Euodia and Syntyche (4:2-3). Paul urged them to “…live in harmony in the Lord. Indeed, true comrade, I ask you also to help these women who have shared my struggle in the cause of the gospel, together with Clement also, and the rest of my fellow workers, whose names are in the book of life.” What can we learn from these verses?

First, in the Greek language, the name Euodia could belong to a man or a woman. The possibility that Euodia was actually a man, has led some to speculate that the offending duo was actually a couple, and perhaps even the jailer and his wife from Acts 16. However, Paul said, “help these women,” leaving no doubt as to their gender.

Then, Paul enlisted a person whom he called a “true comrade” or “yokefellow” (KJV) to assist Euodia and Syntyche with their problem. Since Paul did not identify this person by name, suggestions range from Silas, Timothy and Barnabas, to Epaphras who delivered this letter to the church at Philippi (1:7). Whomever he was, Paul trusted him to provide wise counsel in this situation.

It seems clear that Euodia and Syntyche were well-known Christians in the church at Philippi. They had assisted Paul in his work and shared in his struggles. He considered them, along with Clement, to be fellow workers, numbering them among the saved whose names he believed were written in God’s ‘book of life. “They belonged to the number of those who laboured” (M.R. Vincent1). In other words, they were not people on the fringe of the Philippian fellowship; they worked hard to serve their Master.

Yet for some reason they did not get along.

Their lack of harmony was disturbing the church. If it were not so, Paul wouldn’t have publicly urged them – by name – to live in harmony. By doing this he enlisted the attention of the whole church. David Lipscomb wrote, “These two women…had disturbed the peace and harmony of the church. A Christian shows his selfishness and his disregard for God when he disturbs the body of Christ to gratify his own and gain his ends…” 2

We would do well to point out that men who have set out to serve Christ have done their share of quarrelling as well. The gospels tell us that even the Lord’s own apostles argued among themselves, about “Who is the greatest?” This dispute continued right up to the time of the last supper, shortly before Jesus led them out to the Garden of Gethsemane! (Luke 22:24-27)

But in Philippians 4 neither of these two women were willing to make peace. This was discouraging the church and Paul felt the need to publicly point out the problem and urge them to live in harmony. Their great service to the church was now endangered by the disservice of their personal disagreement.

Why is it that useful, accomplished, admirable Christians sometimes fail to get along, becoming instead a source of grief and heartache in the church? It surprises us when it happens, but perhaps we should not be startled. People of strong character with firmly held opinions often bump heads with others of their own kind.

When such members act out of concern for the teaching, the work and worship of the church, there is often little room for compromise. The presumptive behaviour of self-appointed strong-willed leaders, are understandably resented by others. We don’t know what the issue was between Euodia and Syntyche. The fact that the apostle Paul does not identify a subject or point of disagreement suggests that this lack of harmony was personal and not doctrinal. All the same, it was destroying the peace in an otherwise harmonious church.

From Paul’s point of view, some sort of intervention was needed to motivate these two women to settle their differences. He appealed to a trusted brother for intervention and perhaps also to the entire congregation. When precious unity is threatened by disruptive problems between people, wise intervention is needed. Hiding our heads and hoping that a problem will go away on its own…solves nothing.

Earlier in the letter the apostle had already offered principles that have the power to dissolve these kinds of troubles. He wrote: “Do nothing from selfishness or empty conceit, but with humility of mind let each of you regard one another as more important than himself.” (2:3) Humility and high regard for the value of fellow Christians produces consideration and harmony. What if Euodia and Syntyche decided that they would “not merely look out for your own personal interests, but also for the interests of others” (2:4)? Cooperation and appreciation could have rebuilt their relationship.

Above all else our disposition toward our brethren needs to parallel the attitude of Christ when He “emptied Himself, taking the form of a bondservant…He humbled Himself by becoming obedient to the point of death, even death on a cross.” (2:5-8) The Son of God deliberately came to earth from heaven out of concern for failing Mankind, taking our nature upon Himself, and offering the sacrifice of His own body and blood. None of us could find salvation without His humble sacrifice. We are to take this attitude upon ourselves as we serve Him together. If the two women in Philippi had taken this to heart, they could then fully “agree together in the Lord’s fellowship.” (NEB)

Seeking to avoid such problems ourselves, let’s remember Paul’s practical advice in 2:14-15. “Do all things without grumbling and disputing, that you may prove yourselves to be blameless and innocent, children of God above reproach in the midst of a crooked and perverse generation, among whom you appear as lights in the world.” In a way we must prove who we say we are as we live in our own perverse times. Refusing to grumble and engage in disputes confirms to the world that we are living for something refreshingly better. We are responsible to appear as lights in the world. If we remember this, it’s easier to live in harmony.

The church in Philippi was not flawless, but they served a perfect saviour who lived within each of them, including Euodia and Syntyche. I’m sure that they accepted Paul’s advice and with help from their brethren, got back on track, working together in a more harmonious way. Let us determine to do the same.