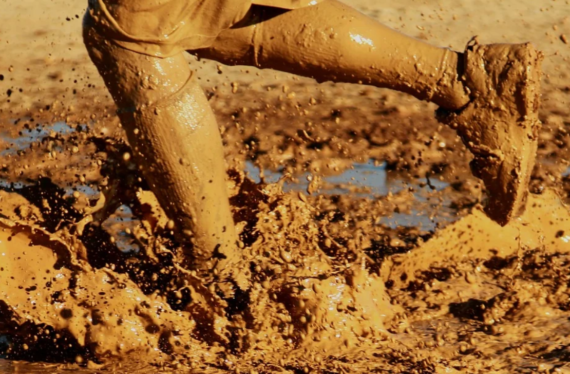 As we slide into spring, we expect one of the muddiest times of the year, especially here in Canada. Mud is a part of life for kids, dogs, and even adults. If we could go back in time even a hundred years, we would be shocked by all the mud. People worked in it, sunk in it and were often caked by it. Before regular bathing became common, people scraped it off themselves or beat it free with broom-like devices. Thankfully we live in a cleaner environment, but it seems that God often uses the humble things of life, including mud, to teach us and to change us.

THERE WAS ONE WHO DESPISED IT.

In 2 Kings 5 we find the well-known story of the great Aramean military leader, Naaman. He was a valiant warrior who had won important victories for the king of Syria. His boss appreciated and respected him, but as an idolater, he didn’t know that the God of Israel was the one who had made Naaman successful. Despite all of that, Naaman suffered from leprosy. His skin would have been scarred and he would have lived in constant pain.

At the suggestion of a young Hebrew slave-girl, Naaman sought help from God’s prophet Elisha. Respecting ancient political protocol, he came first to Samaria and to the Israelite king Jehoram. He asked Jehoram to send for Elisha, so that the prophet might heal him. Because Jehoram was an unbeliever, he was sure that Naaman was looking for an excuse to go to war by asking for something that could not be done. But Elisha sent word that it could be done and directed Jehoram to send Naaman to him. It was only natural then, that when Naaman arrived he expected a miracle. He also expected same respect and deference from Elisha that had been shown him by the king of Israel

Naaman was unpleasantly surprised when Elisha did not even come out to meet him in person! Elisha sent a lowly messenger with blunt instructions to: “Go and wash in the Jordan river seven times and you shall be clean!” Naaman became furious and went off in a huff. He didn’t think much of the muddy Jordan river. At least the rivers back home were clean and clear. He found it all very humiliating.

Wise assistants convinced Naaman to follow Elisha’s instructions. After all, the prophet had actually said – YES! So it was that when he dipped for the seventh time in those murky waters, his skin became like the flesh of a little child. He was a changed man both in body and spirit. It took humility and obedience for Naaman to be healed, and in the process he became a believer.

God still requires the same. No one can be saved on their own terms. And no one can serve God without submitting to His will. Jesus humbled himself before his heavenly Father and came to serve his own servants. As His servants, we ought not expect glory and attention for doing what our master has already done. Like Naaman, we need to ‘get over ourselves’, in order to serve our Lord with humility.

Mud sometimes teaches us humility and reminds us that there has never been anyone more humble than our Lord and Master.

THE ONE WHO WELCOMED IT.

The unknown blind man of John 9 had a hard life, having been unable to see since birth. Jesus and the disciples encountered him not far from the temple, for he was a beggar used to sitting in the dirt by the side of the road. We meet others like him in the New Testament, such as Bartimaeus in Luke 18.

The disciples first instinct was to debate what it was that had caused his blindness and his low position in life. Rather than helping, they asked: “Rabbi, who sinned, this man or his parents that he should be born blind?” If I might condense Jesus’s answer, He said, “It’s nobody’s fault, but God can do something good with it, and this is our opportunity to do it now.” Rather than debate the reasons for the man’s handicap, Jesus simply wanted to help him. Isn’t it always easier to debate someone’s need than to take up the opportunity to help?

Jesus made mud out of dirt and spit, which is a bit revolting because he smeared it on the man’s eyes. Then he sent him to the pool of Siloam to wash it off. Suddenly, and for the first time in his life, that man could see! What a wonderful shock, to see other people and the sights all around. Why we might ask, did Jesus use mud? Perhaps because this man was used to mud; he could relate to it. He needed to feel Jesus healing him instead of simply hearing him speak the words. Jesus used an ordinary substance that in itself had no healing power, to produce a miracle. The man welcomed it.

To Naaman, muddy water was humiliating. To this blind man, mud gave him his sight. God can take the muddy, difficult things of life and turn them into something helpful, something to learn from, and something that can change us.

THE ONE WHO GREW FROM IT.

The fourth-smallest book of the New Testament, Philemon, reveals the difficult circumstances of Onesimus the slave, and the heart of his master. Verse 11 indicates that this servant was not especially useful; perhaps lazy or incompetent. It may have been that Philemon had given him the worst jobs in his household. You might say, that Onesimus was used to the mud and grime of lowly service.

At some point he ran away from his master, ending up in Rome, about 1200 miles from where he set out. That’s like walking from Toronto to Winnipeg. He would have begged for food along the way, worked at miserable jobs, and maybe even stole things just to survive. The security of Philemon’s home must have seemed much better after he struggled along. Finally reaching Rome, he somehow encountered Paul in confinement and soon obeyed the gospel. The apostle cared for him and matured him in Christ. He became a valuable servant of the Lord. In fact, his name actually means “useful.” The writer makes this play on words in verse 11.

Paul eventually had to decide what to do about Onesimus, for technically he was owned by Philemon on another continent. Paul had no legal right to keep him in Rome. So the decision was made to send Onesimus back to Colossae. In his accompanying letter he appealed to Philemon to treat Onesimus as a brother, for he had become a strong Christian. He was not just a menial slave like he was before (see v16).

A tough life of muddy chores and the hardships of being a fugitive motivated this man to seek something better, and he found it in Christ and His people. They gave him a new life based on a new saviour and a new gospel.

There’s an ancient historical record that speaks of a Christian named Onesimus in the late first century who became an elder in the church in Ephesus. Was this him? We don’t know for sure. What we do know is that the once useless slave became a very useful Christian. The mud and dust of slave service brought this man to seek a better life.

I hope you realize that I am using the word mud, to refer to life’s messy, tough, and humbling difficulties.

Naaman and the muddy Jordan teaches us that we have to dispense with human pride before we can be blessed by God and saved from our sins. And having done so, to persist in humility when dealing with life’s troubles. The blind man of Jerusalem teaches us that it doesn’t matter how lowly and difficult our life is, God can save us, and make each one into a better person, with better things to live for. God also had better things in mind for Onesimus. He fled human slavery to become a slave of God and in so doing became truly useful. God did not save him from his duties under the law, but send him back to his earthly master – a changed man. God promises to do the same for us.

I’m reminded of Paul’s words in 2 Cor.12:10, “Therefore I am well content with weaknesses, with insults, with distresses, with persecutions, with difficulties, for Christ’s sake; for when I am weak, then I am strong.”

What kind of muddy troubles have you been through as a person? Look to God in faith, for He can do wonders.