When Christ Who Is Our Life is Revealed 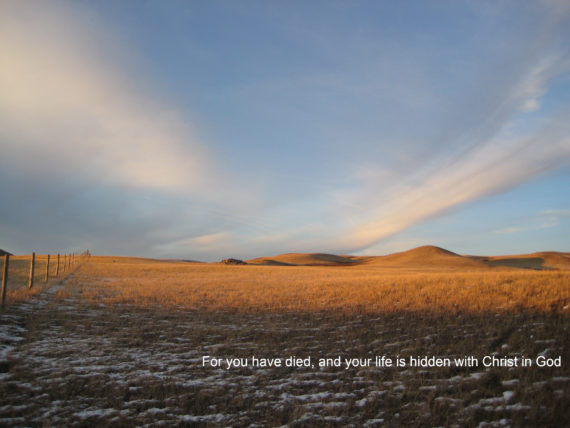 The first two chapters of Paul’s letter to the Colossians set out a doctrinal foundation for the teachings that follow. Paul did this as a matter of course since doctrine ought always to inform and shape our practice and not the other way around.

Chapter 3 opens with a conditional truth upon which his further instructions depend: “Therefore, if you have been raised with Christ”…

In what sense have we been ‘raised with Christ’?

Paul wrote to Christians who were alive and well, living at Colossae. They had each been

‘buried with Christ in baptism and raised with Him through faith in the working of God, who raised Him from the dead. Col 2:12

Once spiritually dead in trespasses and sin, they had come alive ‘in Christ’. Having confessed faith in Jesus and repented of their sins, they were immersed in Christ’s name, joining him in the very act which had purchased their salvation. Though separate in time and space, Christ’s physical death upon the cross and their immersion into his death had come together to form a new spiritual event of unique importance.

On our way into the water, our spirits were dead in sin and our bodies consigned to death-row. Once united with the death (sacrifice) of Christ in baptism, our spirits rose, alive ‘in him’ with the promise that our bodies would one day follow.

No wonder then that Paul urges us to:

Setting our minds on things above, is all about how we live here below. It is ever mindful of life in the presence of God, embracing the certainty of his divine immanence and fully aware of His indwelling in the person of the Holy Spirit. Paul expressed a parallel thought in Gal 2:20 where he said:

I have been crucified with Christ; and it is no longer I who live, but Christ lives in me; and the life which I now live in the flesh I live by faith in the Son of God, who loved me and gave Himself up for me

The apostle Paul was in prison when he wrote. If we are distracted and depressed by our present isolation, just imagine prison life. How easily distracted might Paul have been had he failed to set his mind on ‘things above’. Which of the prison or pastoral epistles might never have been written? It was not that Paul took no notice of food or clothing, nor did he neglect the needs of others. He just did not allow the cares of the world to cut in line and take his attention away from matters of eternal importance.

The encouragement to ‘set our minds on things above’ draws attention to the heavenly origins of spiritual matters. Spiritual things come from, pertain to and are important because they originate with God. They result in behaviour that is ‘worthy’ of those who have confessed faith in Jesus and renounced the kind of life described in verses 5-10.

Paul finishes his thought by saying:

For you have died, and your life is hidden with Christ in God. When Christ, who is our life, is revealed, then you also will be revealed with Him in glory. (Col 3:3-4)

While Christians are to set an example in life, speech and conduct, there remains a hidden quality to the spiritual life granted us in Christ. It is ‘hidden with Christ’, who is himself out of sight. Our spiritual union with Christ and new life in Christ were witnessed by God alone. He has granted it and it is with respect to him that it is so. While our life is now hidden ‘with’ Christ, it is not hidden from us. It is visible to those who live by faith in the Son of God and take hold of his promises.

We do so in the certain knowledge, that when Jesus returns, that which is now spiritual and hidden will become visible and obvious. Christ will return to earth with those whom he has made holy and raised from the dead. His coming will be personal and visible, tangibly evident to all then living on earth. We will rise to meet him in the air, having been transformed and clothed with bodies fit for the presence of God. This is what Paul means when he says that ‘you also will be revealed with him in glory’. On the judgment day that follows, no doubt will remain that those who live on into eternity with God, do so because they have first come alive in Jesus.

There has never been a time in human history that has been free from trouble and heartbreak. The cares of the world and the schemes of the devil compete for our hearts and minds. All the more reason to allow our every thought to be taken captive by Jesus Christ…to fix our minds on things above, in order to live for Christ until he comes.