We Must Obey God – Not Men 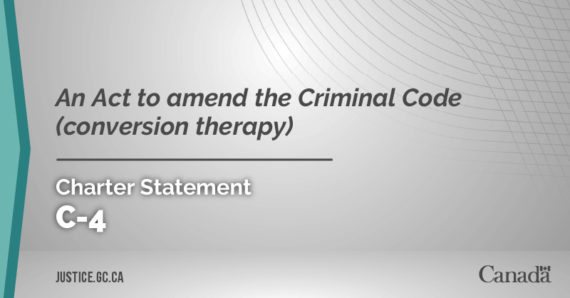 Most of us would confess that we pay little attention to the legislative activity of our federal government. We often assume that those in positions of responsibility will preserve and defend the rights of all of their citizens as set out in the Canadian Constitution. We also have the right to expect, that both houses of parliament will act with due diligence and not in haste, when researching and debating matters pertinent to the drafting of new legislation.

Neither of these two expectations were met when Bill C-41 was introduced to the House of Commons on November 29, 2021 and summarily passed on December 2, 2021. The Senate failed in its role as the ‘house of sober second thought’, passing the bill into law on December 7. As of January 30, 2022, it is now part of the criminal code of Canada.

If there was ever a legislative equivalent of a Kangaroo court, this was it. There was no debate: no weighting of evidence, no consideration of arguments to the contrary and no effort to pre-test it’s constitutionality. See: ( https://www.canada.ca/en/canadian-heritage/services/how-rights-protected/guide-canadian-charter-rights-freedoms.html#a2b)

The government had made up its mind in advance and by drafting this very vaguely worded amendment, it accomplished at least three things.

Sending you to this link shortens my article and safeguards against misrepresentation on my part by encouraging you to read the bill for yourself.

(b) change a person’s gender identity to cisgender;

(c) change a person’s gender expression so that it conforms to the sex assigned to the person at birth;

(f) repress or reduce a person’s gender expression that does not conform to the sex assigned to the person at birth.

This definition is intentionally broad, failing to distinguish between:

Questions raised by the vagueness of this legislation.

By censuring and criminalizing only those who attempt to ‘convert’ homosexual and non-cisgender persons, the law implicitly favours conversion moving in the opposite direction. This has long been evident. The public schools are mandated to portray and thus promote gay values and lifestyles as valid moral alternatives. Gender identity is taught as a matter separate from one’s actual gender. And marriage has been redefined in Canada to include unions between persons of the same sex.

The ‘field is tilted’ and ‘the deck is stacked’. All pretension of neutrality is gone and Parliament has declared war upon the church of our Lord and Saviour Jesus Christ.

The term ‘cisgender’ stems from an effort to distinguish between biology and perception. No matter your sex, you can choose to ‘be’ (perceive yourself to be) whatever you wish. A non-cisgender person simply chooses to reject their biology and act upon the conviction (perception) that something else is true.

I am reminded of an argument that C.S. Lewis made regarding the identity of Jesus Christ who claimed to be God in the flesh.

“A man who was merely a man and said the sort of things Jesus said would not be a great moral teacher. He would either be a lunatic — on the level with the man who says he is a poached egg — or else he would be the Devil of Hell. You must make your choice. Either this man was, and is, the Son of God, or else a madman or something worse”. (Mere Christianity)

What Lewis meant was that the ‘facts in question’ must always be the measure of the ‘claims in perception’. The man claiming to be a poached egg is still a man. It does not help anyone for the rest of us to agree or to adopt his view of reality. It seems reasonable that only those who know a real poached egg when they see one, are in position to help.

As an act of desperation Bill C-4 is an intemperate use of power intended to prop up a failed worldview by criminalizing and imprisoning those who disagree. This use of power to destroy truth is straight out of Satan’s handbook. The Bible says that he has been a liar from the beginning and is in fact the “father of lies’ (John 8:44).

Regarding our mandate to Evangelize

Writing to the churches in Rome, the apostle Paul made it clear that the gospel of Jesus Christ is God’s power (his one and only way) to save the world from sin. Stated negatively, unless sinners hear, believe and obey the gospel, they cannot be saved. There is no other remedy.

Paul goes on to explain that the gospel reveals two things. It reveals how righteous God is and how we can participate in His righteousness. And it details those against whom the wrath of God is directed. Here is what he wrote – and notice how it applies to this parliamentary bill and the society whose values it expresses (Romans 1:18-32)

“For the wrath of God is revealed from heaven against all ungodliness and unrighteousness of people who suppress the truth in unrighteousness, because that which is known about God is evident within them; for God made it evident to them. For since the creation of the world His invisible attributes, that is, His eternal power and divine nature, have been clearly perceived, being understood by what has been made, so that they are without excuse. For even though they knew God, they did not honour Him as God or give thanks, but they became futile in their reasonings, and their senseless hearts were darkened. Claiming to be wise, they became fools, and they exchanged the glory of the incorruptible God for an image in the form of corruptible mankind, of birds, four-footed animals, and crawling creatures.

Therefore God gave them up to vile impurity in the lusts of their hearts, so that their bodies would be dishonoured among them. For they exchanged the truth of God for falsehood, and worshipped and served the creature rather than the Creator, who is blessed forever. Amen.

For this reason God gave them over to degrading passions; for their women exchanged natural relations for that which is contrary to nature, and likewise the men, too, abandoned natural relations with women and burned in their desire toward one another, males with males committing shameful acts and receiving in their own persons the due penalty of their error.

And just as they did not see fit to acknowledge God, God gave them up to a depraved mind, to do those things that are not proper, people having been filled with all unrighteousness, wickedness, greed,and evil; full of envy, murder, strife, deceit, and malice; they are gossips, slanderers, haters of God, insolent, arrogant, boastful, inventors of evil, disobedient to parents, without understanding, untrustworthy, unfeeling, and unmerciful; and although they know the ordinance of God, that those who practice such things are worthy of death, they not only do the same, but also approve of those who practice them.”

The apostle traced the sharp downward moral spiral of those who in every age, deny the being and person of God. And while the list of sins goes far beyond the subject matter of Bill C-4, the sins of homosexuality and lesbianism are prominent.

The preaching of salvation in Christ includes information about just what kind of conduct constitutes sin and falls under God’s eternal judgment. Given that salvation is offered upon condition of repentance, those who would accept God’s grace are required to embrace His goodness and become His agents of change. Bill C-4 appears to forbid what God commands. In order to remain faithful to God, we must respond as the apostles did when faced with a ‘gag order’ from the high court of the Jews. ‘We must obey God rather then men’ (Acts 5:29)

Not only is it our duty to share the gospel, it is our mandate from God to help those coming out of a life of sin – to persist in righteousness. We come alongside adulterers and fornicators to keep them faithful. We stand with addicts of all kinds to fight addiction. And we must help those who have renounced their gay way of life – to remain faithful to their Lord and master.

In the first century, some who had once practised homosexuality had become part of the early church. Paul wrote to the whole church for the purpose of strengthening them in their new way of life and encouraging them to remain faithful.

Persecution has always had the unintended consequence of strengthening the convictions of those persecuted. It forces those who hold them, to get serious or to get out. And while it has never been an effective means of achieving the goals of those who use it, Satan still does. He works through agents, to intimidate and silence. And since Satan has never had the truth on his side, he invariably resorts to the use of force.

The church of the first century prospered in the face of persecution for it worshipped a crucified saviour and served a resurrected Lord. They counted it a high privilege to be counted worthy to suffer (Acts 5:41) and took up their cross daily (Luke 9:23) having counted the cost (Luke 14:33). God blessed them and strengthened them to endure and will do so today.

What Should We Do?

May we then persist in “destroying arguments and all arrogance raised against the knowledge of God”, and strive to take “every thought captive to the obedience of Christ…” (2 Cor 10:5)