The Preacher: The Man and His Work 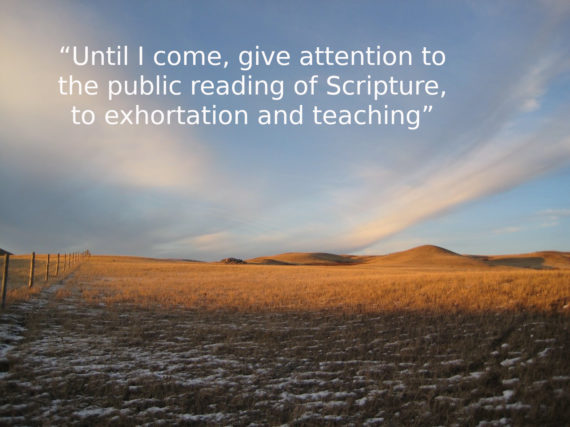 In the June issue, in an article entitled ‘Spiritual Leadership in the Church” we touched briefly on the person and work of the ‘evangelist’ in the context of other leadership roles. This article expands somewhat upon the work that God calls evangelists to do. Geoff Ellis’ current series of articles about brother C.G. McPhee highlights the key role that men like him have played in the growth and spiritual health of congregagions in Canada.

From time to time, every congregation finds itself in search of someone to work in this capacity. Such times may provide a healthy pause during which a church may re-evaluate where they are as a congregation and what they should be looking for in a preacher.

One of the ‘speaking ministries’ that we find in scripture is that of the preacher or evangelist. Both the Synoptic gospels and the Book of Acts tell us that this was the main thing that Jesus spent his time doing. Evangelists in the church carry on that same work

In the New Testament, the verb form ‘to teach’ is more common than the noun – ‘teacher’. Here are the 3 places where the noun form occurs, and these are important since they specify this function as a distinct role or ‘office’ in the church.

“But you, be sober in all things, endure hardship, do the work of an evangelist, fulfill your ministry.”

Timothy is also addressed in Paul’s letters as

These suggest facets of who the preacher is and what he must be in order to do the work of an evangelist. There was a special connection between the evangelist and the apostles in that much of their work was the same

Paul often described his ministry in terms of preaching the gospel.

The apostles were appointed to their role by the Lord Jesus. Evangelists on the other hand were not appointed directly by the Lord, yet they shared the job of proclaiming the gospel. There is also no indication that like the prophets, they received their message directly from the Holy Spirit. It seems that they needed to learn, to study and apply themselves to scripture in a responsible way

The Work of an Evangelist

It almost seems redundant then to say that evangelists – evangelized, since the word itself means “one who preaches the gospel”. As a servant of Christ, the evangelist is a minister of the word.

One of his responsibilities is to put the Lord’s instructions before the brothers and sisters – as we find in I Tim 4:6. “In pointing out these things to the brethren, you will be a good servant (slave) of Christ Jesus, constantly nourished on the words of the faith and of the sound doctrine which you have been following”.

Timothy’s first allegiance was to Jesus. He followed the Lord’s instructions and shared these with others. In that sense he is a “Man of God” (I Tim 6:11). In the Old Testament this term referred to the prophets. (I Kings 13:1-32). Prophets were messengers from God, sent to teach God’s word, and thereby calling God’s people back to faithfulness

The writings of Paul indicate a number of different kinds of preaching and activities associated with it.

He travelled and preached.

Other evangelists did the same things that Philip did. They won new members and they planted churches. They visited churches and if they found them deficient in doctrine or practice, they stayed to turn those congregations back to God. With new church plants, they worked to organize the church, having a hand in the appointment of elders.

Paul left Titus in Crete for that very purpose.

“For this reason I left you in Crete, that you would set in order what remains and appoint elders in every city as I directed you,” Titus 1:5

Having said that, it appears that evangelists did more than just preach the gospel and plant new churches. As evangelists, Timothy and Titus were to ‘strengthen’ those already in the faith and to refute false teachings in well established congregations – even those with elders – as we see in I Tim 4:6

Included in these were

Like Timothy, Titus was also to teach that which was consistent with ‘sound doctrine’. (2:1). This included instructions for different age groups of both genders and members of various levels of society (Tit 2:2-10)

One way that they strengthened the church was by refuting error’.

So Paul wrote this to Timothy

For there are many rebellious men, empty talkers and deceivers, especially those of the circumcision, who must be silenced because they are upsetting whole families, teaching things they should not teach for the sake of sordid gain. One of themselves, a prophet of their own, said, “Cretans are always liars, evil beasts, lazy gluttons.” This testimony is true. For this reason reprove them severely so that they may be sound in the faith…

Replacing false doctrine with the truth…was part of a preacher’s job. We find this over and over again in the pastoral epistles – which tells us that it remains an important element of a preacher’s work.

In pointing out these things to the brethren, you will be a good servant of Christ Jesus, constantly nourished on the words of the faith and of the sound doctrine which you have been following. You might also read: II Tim 2:24, 4:2 and Tit 2:1

So evangelists were engaged in edification and exhortation. They built people up by preaching the word. They stopped false doctrine by refuting it. They supported what they said by appealing to sound reasoning and to scripture. And they promoted the kind of change that God wanted.

Evangelists also had a duty to perpetuate the evangelistic work of the church. They did this at least in part by training others to carry on the work as Paul directed Timothy: “You therefore, my son, be strong in the grace that is in Christ Jesus. The things which you have heard from me in the presence of many witnesses, entrust these to faithful men who will be able to teach others also (II Tim 2:2). Timothy was to find other like minded and perhaps like-gifted men and then provide biblical knowledge and skills training. These men in turn were to do the same.

In I Tim 4:13 Paul seems to sum up the public work of an evangelist: “Until I come, give attention to the public reading of Scripture, to exhortation and teaching”

Preachers ought to engage in all of these activities

All of this is demanding work and why God has provided for preachers to be supported and able to work full-time (I Cor 9:13-14). Such support is extended to elders who also engaged in teaching and preaching (I Tim 5:18). By providing financial support for the work of elders and evangelists God indicated that these were permanent roles and functions within the church.

We serve now as they did then. We are God’s agents on earth, and on a mission to bring other people to the one who can save them. Evangelism is necessary: essential to church life and the persistence of the church on earth. Those who lead must be fully engaged in it and set an example for others to follow

The Evangelist as a Man of God.

Given the kind of spiritual work that an evangelist is called to do, what sort of man ought he to be?

The Lord’s bond-servant must not be quarrelsome, but be kind to all, able to teach, patient when wronged, with gentleness correcting those who are in opposition, if perhaps God may grant them repentance leading to the knowledge of the truth, and they may come to their senses and escape from the snare of the devil, having been held captive by him to do his will. (II Tim 2:24-26)

You’ll notice that some of these qualifications are personal qualities and some are skill’s oriented.

In I Tim 6:3-10, the apostle Paul gives a long list of conduct to be avoided. Included in that list of things that the preacher must must not do:

Instead Paul says: “…flee from these things, you man of God, and pursue righteousness, godliness, faith, love, perseverance and gentleness” (Vs 11). And to these Paul added the quality of ‘purity’ in I Tim 5:22. Notice the things in which Timothy was to serve as an example to the church – (I Tim 4:12)

Let no one look down on your youthfulness, but rather in speech, conduct, love, faith and purity, show yourself an example of those who believe. Perhaps we are more in danger today of despising age instead of youth. But, Timothy – and by extension, all preachers are to set an example in:

Take pains with these things; be absorbed in them, so that your progress will be evident to all. Pay close attention to yourself and to your teaching; persevere in these things, for as you do this you will ensure salvation both for yourself and for those who hear you. (vs 15-16)

Timothy was to be diligent about his duties as a preacher. They were to command his attention and he was to pursue them.

This then is the kind of man that a congregation ought to look for and the kind of work that the Lord wants him to do. The evangelist himself must aspire to these qualities in order to serve as an agent of the Lord among those who love the Lord.

Now perhaps more than ever in the recent history of the church in Canada, such men are needed. May each congregation and each body of elders do their best to raise up such men, equipping them to serve for the greater progress of the gospel.

Note: article adapted from a presentation made by the author at Sault Ste Marie.

PrevPreviousThe Longest Walk That You Will Ever Take
NextHIDDEN TREASURENext