The Nature of Biblical Inspiration 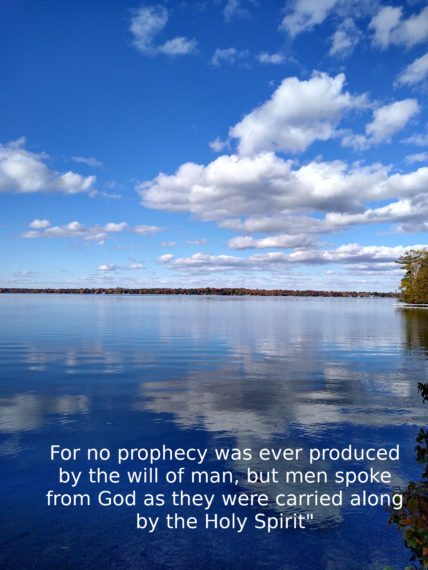 “For we did not follow cleverly devised myths when we made known to you the power and coming of our Lord Jesus Christ, but we were eyewitnesses of his majesty. 17 For when he received honour and glory from God the Father, and the voice was borne to him by the Majestic Glory, “This is my beloved Son, with whom I am well pleased,” 18 we ourselves heard this very voice borne from heaven, for we were with him on the holy mountain. 19 And we have the prophetic word more fully confirmed, to which you will do well to pay attention as to a lamp shining in a dark place, until the day dawns and the morning star rises in your hearts, 20 knowing this first of all, that no prophecy of Scripture comes from someone’s own interpretation. 21For no prophecy was ever produced by the will of man, but men spoke from God as they were carried along by the Holy Spirit” (2 Peter 1:16-21, ESV).

What does the Bible mean when it speaks of the scriptures being “inspired” or when it talks of truth being “revealed”? What did Paul mean when he commended the Thessalonians for accepting his teaching as the “word of God”? What does Peter mean in this text when he assures of that God “carried” the writers of scripture along as they wrote?

“All scripture is God-breathed” (2 Tim 3:16). This means that the Bible comes from God. He used humans to write it, but he guided them so that they would write correctly. “For prophecy never had its origin in the will of man, but men spoke from God as they were carried along by the Holy Spirit” (2 Pet 1:21).

The idea that God guided the writers of the Bible is called “inspiration.” This is the word that is used in the King James Version at 2 Timothy 3:16. The KJV says, “All scripture is given by inspiration of God.” All Bible students know that the Bible claims to be inspired by God, but not all Bible students agree about what this means.

One View of Inspiration

To some Christians inspiration means that God gave the writers every word that they used. These believers think that there was no work involved for the human writer. Some even speak of the writers going into a trance and writing the books without even being aware of what they were doing. This is often called the “dictation view of inspiration.” This idea of inspiration is not correct. The Bible does not claim that God gave the human authors every word. Luke wrote more of the New Testament than anyone else. Luke does not claim that God gave him every word. In fact, Luke tells us that he had to study carefully to prepare the books he wrote.

Many have undertaken to draw up an account of the things that have been fulfilled among us, just as they were handed down to us by those who from the first were eyewitnesses and servants of the word. Therefore, since I myself have carefully investigated everything from the beginning, it seemed good also to me to write an orderly account for you, most excellent Theophilus, so that you may know the certainty of the things you have been taught. (Luke 1:1-4, ESV)

This is not a claim that God gave him every word. Luke makes it clear that he had to study. God did not do all the work for him. If God had given each Bible writer every word, we would expect to find the vocabulary the same throughout the Bible. But we do not find that to be the case. Instead, each Bible writer was allowed to use his own vocabulary and style. God guided the writers, but he did not do all the work for them.

Another View of Inspiration

The Bible does not claim that God supplied every word of scripture, but it does claim that every word is reliable. In First Thessalonians 2:13 Paul tells his readers, “And we also thank God constantly for this, that when you received the word of God which you heard from us, you accepted it not as the word of men but as what it really is, the word of God, which is at work in you believers.” This statement makes it clear that the biblical writers were claiming clear, specific guidance from God. It was not just the general idea that was inspired. The full message could be trusted. Jesus had such faith in the accuracy of the scripture’s wording that he based a major teaching on the tense of a verb. In Matthew 22:23-33 he bases his teaching on the resurrection upon the fact that the scripture says “I am the God of Abraham…” rather than “I was the God of Abraham.” Such a point demands that we view the very words of scripture as guided by God.

The biblical claim of inspiration is not that God did all the work for the human authors. Nor is it a claim that only the general ideas were from God. Inspiration is the guidance of God that assures the truth of what is recorded without taking away the individual style, vocabulary, or point of view of the human author. It is God giving the human author all necessary aid without doing the entire job for him.

We should not expect every Bible writer to use the same words as the other writers. We should not think that God did all the work for the human authors. But we should read the Bible with a different attitude than we have when reading other books.

PrevPreviousWhat is God Doing about Evil?
NextMY DEPARTURE WILL BE SWIFTNext