MY DEPARTURE WILL BE SWIFT 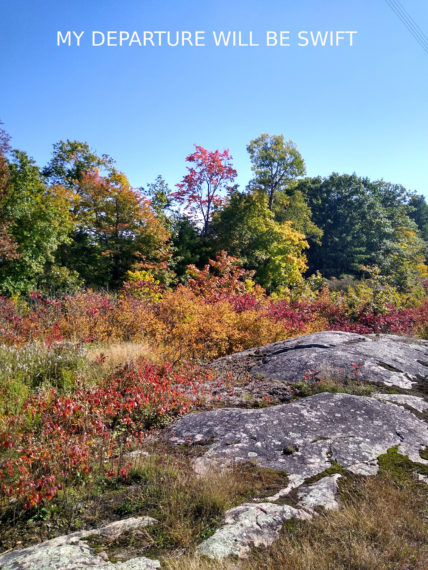 In Peter’s second and final book he penned in the New Testament, his words are not only strong and insightful, but also personal and tender. Verses 12-15 of the first chapter along with the first two verses of the second display the latter characteristics.

Peter was nearing the end of his life on earth. He had gone from fisherman to nascent apostle, to great apostolic preacher, and now an older, wise, and inspired church leader (See elder and witness, 1 Pet.5:1). His audience may have been situated in the same Asia minor locations listed in the opening verse of his first book, or perhaps to the Christians in Rome if early uninspired Christian writers are correct in their claims. No doubt he was aware of the universal scope of his material which would reach the entire brotherhood. We’ll leave these matters to our other writers this month and next. My point here is that Peter genuinely cared for the Christians he was writing to and expressed his earnest desire to “stir them up by way of reminder” as an older apostle and preacher.

With whatever time he had left, he was “always…ready to remind you of these things.” Did he have a year or two left, or just months? While He didn’t know exactly, he did know that his death was imminent. Jesus himself had told him this. Peter may have been referring to the Lord’s words in John 21:18-29, “signifying by what kind of death he would glorify God.” It is more likely the Lord had revealed a clearer timing for the apostle’s demise through other inspired messages. Peter knew death was coming soon and he took this final opportunity to encourage his brethren.

Notice how he viewed his current life in view of its upcoming end. He called it “this earthly dwelling” (v13-14). The word means “tabernacle” or “tent.” Paul used the same imagery in 2 Cor.5:1-2. When the Israelites came out of Egypt they lived in tents in the desert and struggled to carry the holy tabernacle as they went. This was temporary, for more permanent structures would be built when they reached the promised land. Peter viewed his earthly life as temporary in view of something greater to come. Death, then, is a matter of laying the temporary aside for something permanent and glorious, much like one would change out of work clothes for something nicer. God has greater things for us after death (see Phil.3:21). Peter didn’t see the end of life as something empty and frightening; he saw it as a transition to something much greater and wonderful. Further, in verse 15 he spoke of his departure. Using the word exodus, he again calls up the image of Israel taking the road out of Egypt towards the land of promise. The apostle thought of his death as taking the road out of this life into heavenly realms. Let’s be encouraged by Peter’s thoughts as all of us eventually approach the end of our lives on earth.

Having stated these things, Peter pointed out that he was determined in his final stretch of life to remind them of the need to “be all the more diligent to make certain about His calling and choosing you” (v10). They already knew the truth. Peter pointed out they had been established in it, implying a settled and ongoing commitment to it. It was present with them, almost as if the truth was alive like a person among them. He expressed similar thoughts in 1 Peter 1:23 about “the living and abiding word of God.” They could lose its presence by neglect and unfruitfulness, which would be disastrous. So, he was determined to “stir you up by way of reminder” (v13). Most of us have many opportunities to be taught each week among brethren, and to be stirred up and reminded about the principles, commands and directions found in the word of God. This may seem tedious at times, but it reinforces the truth within our hearts as we go about living in this difficult world. We need it just as much as the people to whom Peter was writing. The mind is forgetful, the Bible is a large book, and we need regular reminders of the words of life.

Let’s also learn from Peter about the value of a purpose right to the end of our lives. Even though he was soon to face death, he “considered it right” to stir them up. He repeats this in 3:1, “I am stirring up your sincere mind by way of reminder.” His body may have been failing him as he aged, but he was determined to fulfil his purpose until his dying breath. We, too, must find ways to serve our Lord until the end. The ways we can serve may change but serve we must. My father used to make intricate wooden 1930’s type cars and trucks with church kids on Wednesday nights after a short Bible lesson. Now adults, they prize these little marvels of engineering. But the time came when he could no longer do it, so to keep active he made phone calls to people to check up on them and encourage them. He was busy doing this right up to within a few weeks of his death. It’s what he could do, and he did it well.

Two thousand years later we benefit from Peter’s final recorded words written to stir us up and remind us. He was aware that through his final acts of diligence, “you may be able to call these things to mind.” What a great way to utilize our own final years of life on earth before our own departure: serving and reminding others.

I, too, have reminded us.