The Case of Abraham 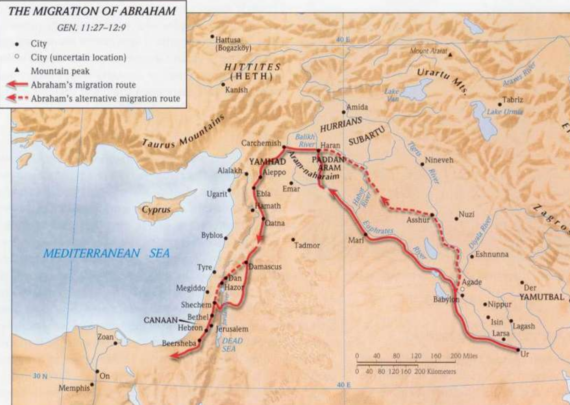 A Study for the Here and Now

Abraham plays an important role in God’s great eternal plan. He is one of the most important figures in the Bible. It is through his lineage that Jesus the Saviour of the world came (Matthew 1; Luke 3). No one can understand the Old and New Testaments without understanding Abraham, for he is a very important person in the history of God’s work of redemption.

The Importance of Abraham to Us Today

Abraham plays an important role in Christianity. His name and life patterns are found in the Bible as an ancestor of Jesus. It is through his lineage that the Saviour of the world came (Matthew 1; Luke 3). The story of Abraham contains the first specific mention in the Bible of God’s righteousness assigned to a man by faith and justification by his works which are both important parts of God’s total means of salvation (Genesis 15:5–6 and James 2:20–24). It was Abraham whom God chose to be the father of many nations, simply because it was His will. God knew that Abraham would struggle with the call set before him but He also knew that his struggle would produce great faith, growth and maturity.

Are you ready to learn more about Abraham and how his life is an example for us in our walk with Jesus? Here are seven things from the Bible you may not know about Abraham:

1) God’s righteousness is assigned to Abraham because of His faith before the law and the gospel (Genesis 15:5–6).

2) Abram (later Abraham) was 75 years old when God called him to leave his home.

3) Abraham grew up in Mesopotamia, which scholars identify as one of the oldest civilizations in the world.

4) Abraham was raised by idol-worshipping parents.

5) Abraham lied about Sarah being his sister (she was his half-sister).

6) Abraham was the tenth-generation descendant of Noah.

Abraham’s name was originally “Abram,” which means “the father is exalted.” His name was changed to “Abraham,” which means “father of a multitude,” when God initiated His covenant with him (Genesis 17). God promised Abraham that he would be the father of many people. However, he and his wife Sarah were past the normal age of having children, therefore it would clearly be a miracle of God were they to have any. Nevertheless, Abraham trusted God and believed God could accomplish what He had promised.

From the Old Testament we find out lots of details about this good and valuable man. One of the most difficult requests by God to Abraham was that he take his son Isaac and offer him on the altar as a burnt sacrifice! Imagine this???

You may wish to read this account in Genesis 22. It is scary, thrilling and it demonstrates the will of God and the will power of His servant!

When God told Sarah and Abraham that they would have a child in their old age, they both laughed. Their laughter at God’s plan showed their disbelief that He could do what He said He would do. The Bible tells us, “Then the LORD said to Abraham, ‘Why did Sarah laugh and say, ‘Will I really have a child, now that I am old?’ Is there anything too hard for the LORD? I will return to you at the appointed time next year and Sarah will have a son.’ Sarah was afraid, so she lied and said, ‘I did not laugh.’ But he said, ‘Yes, you did laugh.’”(Genesis 18: 13–15).

We would like to think Abraham believed God at once without any doubt, but this is not the case. He finds God’s word nearly impossible to believe. After all, Sarah is well past the age of childbearing. However, his response to the Lord does not to display total disbelief in the covenant promise. He falls on his face, symbolic of submission, trust and worship. Abraham shows us that real confidence in God doesn’t rule out times when His incredible promises are hard for us to see.

When Abraham was called by God to leave Haran, he obediently did so. In Genesis 12, we read of Abraham (then called Abram) leaving Haran, where his father Terah had settled. This account gives Abraham’s age at this time as 75. Scripture also tells us that he was 86 when his first son Ishmael was born through Hagar, 99 when he was circumcised and 100 when his son Isaac was born through Sarah.

God promised Abraham children (Genesis 15:5; 22:17). But when this didn’t take place as quickly as Abraham thought it should, he became impatient with God and took matters into his own control (Genesis 16:1–6ff). Sarah was still childless, so she told Abraham to have relations with her handmaid, so that they might get a child from the union. A son was born from this union; his name was Ishmael. However, this was not God’s plan. God’s promise was for the offspring of Abraham and Sarah’s union (Genesis 15:3–4). Isaac was the name of the son that came from the union of Abraham and Sarah. It would be through Isaac that the nations would be blessed.

When His Faith Was Tested He Proved His Faith with Obedience

Abraham and Sarah were very happy with their new son Isaac, however, God had a test for Abraham. God told him, “‘Take your son, your only son Isaac, whom you love and go to the land of Moriah and offer him there as a burnt offering on one of the mountains of which I shall tell you’” (Genesis 22:2). This would have been a tremendous shock to any parent; to be blessed by a long- awaited child, only to have God tell you to sacrifice that child. The Bible does not say that Abraham hesitated for a moment. In fact, Genesis 22:8 indicates Abraham’s strong faith that God might not take his son at all. Abraham believed that God would raise Isaac back to life if the sacrifice actually did take place (Hebrews 11:19).

Whether for God’s sake or that of Abraham or Isaac or for our sake as an example, Abraham took his son up to a mountain, laid him down and prepared to kill him in obedience to God’s command. However, God intervened by stopping Abraham from killing his son and by providing a sacrifice in the form of a ram caught in the nearby brush. While Abraham’s faith had been tested, he proved his faith by his obedience to God.

Incredibly, about 2,000 years later God did offer his only Son for our sins in the shadow of Mount Moriah over which the Temple was built.

We Know through Abraham that God Always Keeps His Promises

Abraham had a long and challenging journey. Throughout this journey, he worked hard and experienced grief and blessings. Most of the time, he wasn’t able to see the path ahead, but he held strongly to the promise in his heart. God would continue to fulfill that promise over approximately two thousand years after Abraham’s death with its completion in His Son Jesus Christ. Abraham shows us that real confidence in God doesn’t rule out times when His incredible promises are hard for us to see.

Abraham’s Importance in the New Testament

Many years after Abraham died his genealogy shows up in Matthew 1:1, 2 and 17. Faithful Jews and new believers were called sons and daughters of Abraham (Luke 13:16; 19:9; Galatians 3:7). We also see the promise that he will be there to meet them when they depart from this life (Luke 16:22–23; Acts 7 and Hebrews 11). James 2:20–24 gives us a powerful summary statement of the two important acts of Abraham: believing God for righteousness and offering up Isaac as an obedient work resulting in justification.

Abraham’s faith was important to Paul as well. He writes of “the faith of Abraham” (Galatians 3:6–9), which leads us to the conclusion that this Old Testament man of God truly was an example of faith to all. Finally, read Galatians 3:10–14 and James 2:20–24 noting that God wants us to follow Abraham’s example “in order that in Christ Jesus the blessing of Abraham would come to the Gentiles, so that we would receive the promise of the Spirit through faith” and God’s justification by putting our faith into action through obedient service.

PrevPreviousJoseph’s Journeys:
NextGod Created and All Was Good, Part 2Next