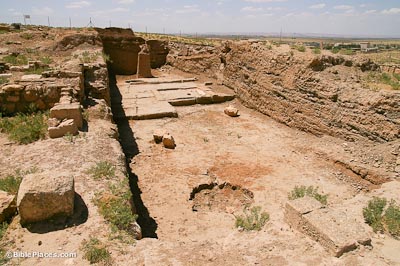 Joseph did a lot of travelling in his 110 years. He learned important lessons on his journeys through life and places that transformed him into a wise, magnanimous and compassionate leader ultimately fulfilling God’s purpose to save lives.

From Paddan-aram to the Promised Land

Joseph travelled the same long journey from Paddan-aram to the Promised Land, Canaan at the time, that his great grandparents Abraham and Sarah and his grandmother Rebekah made. Joseph’s first long journey was about 650 kms as the crow flies, perhaps 850 kms along the Euphrates, the international trade route, past Damascus, down the Jabbok gorge, across the Jordan River and up the Wadi Farah and along the hill country ridge to Bethel on “the way of the patriarchs.”

A big difference for Joseph from his great grandparents and grandmother were the family dynamics with which he grew up and travelled. Joseph made this first long journey with his father Jacob, ten of his brothers, their four mothers and his sister Dinah.

Joseph grew up with tensions between his step-mother Leah and his mother Rachel and his father’s favouritism toward her (Genesis 29). To add to these dynamics, though Joseph was his father’s eleventh son, he was the firstborn of Rachel whom Jacob (Israel) loved the most, so “Israel loved Joseph more than all his sons, because he was the son of his old age; and he made him a full-length robe” (Genesis 37:3). Based on the Greek Septuagint translation, some versions describe Joseph’s coat as many coloured. As a full-length robe it set him apart from those who wore shorter robes more suitable for manual labour.

Soon after their arrival in Canaan, Joseph witnessed the deceit and potential for violence his older brothers were capable of as they avenged Shechem’s rape of their sister Dinah. On the pretence of acceptance of the men of Shechem by their agreement to be circumcised, Simeon and Levi slaughtered them all (Genesis 34). The willingness of his brothers to deceive and even murder soon played a key role in Joseph’s next major journey.

To the Pasture to the Pit

Jacob’s favouritism made life difficult for Joseph as a young man of 17. Sibling envy and rivalry from his brothers were thus not surprising. Joseph’s bad report about them pasturing their father’s flocks didn’t help. Additionally, his dreams of sheaves (his brothers), the sun, moon (his parents) and eleven stars (his brothers) bowing down to him only exacerbated these tensions (Genesis 37:1–11). So Joseph had to live with the dynamics of being simultaneously favoured and resented by his family while being the chosen recipient of prophetic dreams from God! Pretty heady learning experiences for a young man of 17!

After Joseph’s first report about his brothers, Israel sent him on another journey from Hebron up to Shechem and then up to Dothan, about 105 kms in all, to check up on his brothers again. They “saw him from a distance and before he came close to them, they plotted against him to put him to death…. Here comes this dreamer…. let us kill him and throw him into one of he pits” (Genesis 37:18–20). Reuben intervened with a less violent but none the less deceitful plot of his own.

They threw Joseph into the pit alive. Fortunately there was no water in it. Joseph was there alone. Helpless. Far from his father. A literal low point in his short gifted life. God was his only hope. The only way out was up.

To Potiphar’s to Prison

A surprising deliverance from the pit set Joseph on his next major journey of about 525 kms.

By God’s grace and providence, the ancient coastal international trade route passed not far west of Dothan. A caravan of Ishmaelites, descendants of Joseph’s great uncle, were passing by. Before Judah’s plan C to sell Joseph to them could be acted on, Midianite traders also passing by pulled Joseph out of the pit “and sold Joseph to the Ishmaelites for twenty shekels of silver” (Genesis 37:28). After taking him on the long journey to Egypt, they sold Joseph into the service of “Potiphar, Pharaoh’s officer, the captain of the bodyguard” (Genesis 37:36).

Back home, Joseph’s brothers deceived their father Jacob with Joseph’s coat stained with blood. Jacob who deceived his father with Esau’s finest garment would spend the next 20 years thinking his favourite son was dead.

Joseph grew to adulthood in Potiphar’s house where he served possibly up to about eleven years. Joseph proved himself to be a trustworthy man of diligence, integrity and faith, very conscious of God’s presence and honour. Joseph’s stellar character came to the forefront in resisting the seduction of Potiphar’s wife notably explaining this would break his master’s trust and be “sin against God” (Genesis 39:9).

Potiphar likely knew his wife’s character and Joseph’s innocence. He could have had Joseph killed. He had to do something. He satisfied the need for justice and sparing Joseph’s life (for God’s purposes) by putting him in prison.

Joseph has gone from his father’s favour to the pit to favour again and then to prison, another hazardous pit. He relies on God through all these ups and downs and is rewarded: “the Lord was with Joseph and extended kindness to him, and gave him favour in the sight of the warden of the prison” (Genesis 39:21).

As God was with Joseph in the pit and Potiphar’s house He was working with Joseph in prison. Through another low, God brought Joseph one step closer to where He wanted him. Joseph’s willingness to receive God’s revelations again and properly interpret them is a key to his progress.

To Pharaoh’s Palace to Power

Joseph helps his prison mates, Pharaoh’s chief baker and chief cup bearer, by interpreting their dreams which predict the former’s demise and the latter’s deliverance (Genesis 40). Though temporarily forgotten in prison for two years by the cup bearer, Joseph’s interpretations of his prison mate’s dreams bring him into the presence of Pharaoh who is in need of an interpreter for his dreams regarding the fat and thin cows and ears of grain (Genesis 41). Joseph correctly interprets the prophetic dreams God gave Pharaoh which symbolize the upcoming seven years of plenty followed by seven of famine.

Joseph’s wise counsel for Pharaoh to stockpile grain during the years of plenty for food in reserve for the years of famine earned him the power of second in command to Pharaoh. Pharaoh gave Joseph a new name, Zaphenath-paneah (possibly “God lives and speaks”) and Asenath as his wife through whom he had two sons, Manasseh (“making to forget”) and Ephraim (“fruitfulness”), “for God has made me fruitful in the land of my affliction” (Genesis 41:52). Joseph reveals his feelings about all this. It’s been hard: afflictions. But God has brought fruitful blessings out of his affliction.

In further fulfilment of God’s promise to his great grandfather, Joseph uses his power to bless all nations and his family. Through a tense series of events, Joseph brings his family to Egypt who fulfil his dreams by bowing before his authority. He reveals himself and his love for them in the most compassionate and sincere way by his tears, embraces and provisions for them.

Joseph has learned and informs his family that God fulfilled His bigger purposes through all of His journeys: “As for you, you meant evil against me, but God meant it for good in order to bring about this present result, to keep many people alive” (Genesis 50:20).

To the Promised Land

Joseph makes three profound gestures affirming his love of God, his family and the legacy of their eternal heritage. First Joseph returns to the Promised Land with his family to bury their father Jacob in the family burial place bought by his great grandfather. Second, upon returning to Egypt, he reminded his brothers “God will assuredly take care of you and bring you up from this land to the land which He promised on oath to Abraham, to Isaac, and to Jacob” (Genesis 50:24). Third, he makes them swear “you shall carry my bones up from here” (Genesis 50:25). Moses carried them up and Joshua brought them into the Promised Land where Joseph’s remains finally came to rest where the tribes of his sons eventually came to be.

Joseph’s Journeys and Ours

We are all on journeys with God. Joseph’s journeys are an inspiration for ours.

Joseph grew up with challenging family dynamics. He honoured his father even when it made life difficult with his brothers. In the end he showed his perseverance, compassionate love and dedication to them all. He was a major force in keeping them in the family of God.

Joseph lived with losses, separation and being alone. He lost his mother at a young age. He lost touch with his father, brothers, sister and their families for twenty years. Through this time on his own, he learned to rely on God and serve Him faithfully with integrity regardless of his circumstances.

When the time came Joseph knew how to lead and use power for God’s purposes not his own.

Joseph valued history and honour while keeping his eye on the future.

Joseph knew Israel’s future was in the Promised Land. Ours is with him and the whole family of God in His new heaven and earth.

Joseph demonstrated his willingness to receive and accept God’s revelation as He gave it to him and then to properly interpret it for the benefit of others.

Joseph saw the big picture of God’s eternal purpose to save lives and did his part using the resources God gave him.