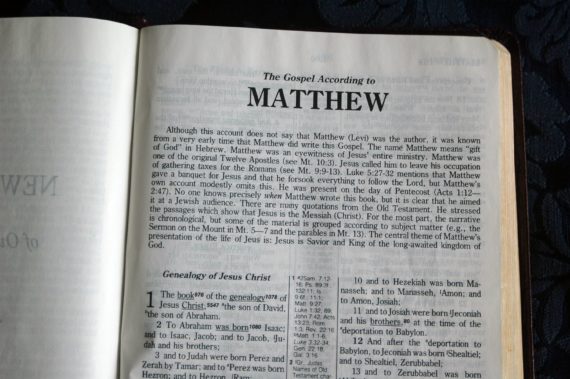 Matthew, Mark, and Luke are known as the “Synoptic Gospels.” This term indicates that the writers describe the life of Christ from a similar point of view. “Synoptic” means “to see together.” That is what these writers do. They do not have identical points of view; but their points of view are similar. John is not among the Synoptics because he has a different approach to presenting the message.

Some people assume that Matthew was first, and that Mark attempted to abridge Matthew.1 To others it seems more likely that it was Matthew who abridged some of the stories in Mark. Matthew seems to tell more events, but his accounts are shorter. Mark has fewer stories but goes into greater detail.

Many believe that Luke was the last Synoptic to be written. Luke tells us that he read and compared “many” earlier accounts before writing his Gospel (Lk 1:1-4). This does seem to point to his gospel being later. But others see all of this differently. Some find no evidence of Matthew having read Mark or Mark having read Matthew. They believe that Matthew may have had a very accurate memory for the words of Jesus, and that Mark, recording mostly lessons he heard from Peter, may have hit upon similar wording. James Scott even suggests that Luke was not referring to written sources in his preface (Lk 1:1-4) but was referring to comparing various oral accounts of the life of Jesus.2 While it is true that many people around the world have better verbal memories than Westerners, this denial of the possibility of written sources seems extreme to most scholars.

The order in which the books were written is not important. If it were important the Lord would have given us information regarding the order. He did not, and so we paraphrase Moses to say, “The secret things belong to the Lord our God, but the things that are revealed belong to us and to our children forever, that we may heed all the words of the gospel” (see Dt 29:29).

Matthew 17:5 He was still speaking when, behold, a bright cloud overshadowed them, and a voice from the cloud said, “This is my beloved Son, with whom I am well pleased; listen to him.”

Mark 9:7 And a cloud overshadowed them, and a voice came out of the cloud, “This is my beloved Son; listen to him.”

All three of the Synoptic writers emphasise that Jesus exercises his authority by means of service. He has all authority, but he did not come to lord it over others. He came to serve.

Matthew 20:25-28 But Jesus called them to him and said, “You know that the rulers of the Gentiles lord it over them, and their great ones exercise authority over them. 26 It shall not be so among you. But whoever would be great among you must be your servant, 27 and whoever would be first among you must be your slave, 28 even as the Son of Man came not to be served but to serve, and to give his life as a ransom for many.”

Mark 10:42-45 And Jesus called them to him and said to them, “You know that those who are considered rulers of the Gentiles lord it over them, and their great ones exercise authority over them. 43 But it shall not be so among you. But whoever would be great among you must be your servant, 44 and whoever would be first among you must be slave of all. 45 For even the Son of Man came not to be served but to serve, and to give his life as a ransom for many.”

The Synoptic writers also emphasise that the service of Jesus is intended to do more than just lift our physical burdens and heal our physical ills. He came to die. He died to save. Although this truth will be explained in greater detail later in the New Testament, it is not overlooked in the Synoptics.

“Of course, Jesus did not heal every sick person in the world. If his focus had been physical need, he would have avoided the cross. By going on to Jerusalem to die on the cross he showed us that physical needs were not his primary concern. He was deeply convinced that his death for our sins was more important than the healing of more physical illness. He had come to serve, and he did serve, but he also came to give his life as a ransom for many (Mk 10:45). The needs he encountered on his way to Jerusalem represent all the needs of the world. He blessed the children. He encouraged a young man to make the right choice. He offered hope to a tax collector in the prime of life. He healed a blind man — representative of those who have been rejected as useless by the world.

“Jesus recognises that their spiritual needs were primary, and that he could meet those needs only by offering himself on the cross. He served them best, not by clinging to life so that he might meet more earthly needs, but by giving himself as a sacrifice. So he went to the cross.” (The Mission of Jesus, p. 29)

Among the Synoptics, there are certain features that are given additional emphasis by one of the writers. For example, Matthew places more emphasis on the fulfilment of the Old Testament scriptures. All of them show that Jesus did this, but Matthew does so more often.

All three stress the importance of women. But Luke seems to emphasise this even more than Matthew or Mark. All three demonstrate that Jesus came to offer salvation to all the nations, not just to the Jews. But again, Luke seems to mention this more often.

They all tell the same story. They all preach the same gospel. But, aware of the special needs of their audiences, they choose different ways of presenting the events.

One example of a difference of emphasis can be noticed in the location and the presentation of the genealogy of Jesus.

Matthew presents the genealogy immediately. Writing for a Jewish audience that considered the genealogy of the Messiah of central importance, Matthew places this first. Matthew mentions King David immediately (Mt 1:1). He then traces the family line back to Abraham (1:2-17).

Luke does not begin with genealogy. The person for whom Luke was writing seems to have been a Gentile, probably a Greek. Perhaps Luke wants to get his reader interested in the story first, before presenting something that Theophilus might find a bit boring. When Luke does present the genealogy of Jesus (Lk 3:23-38), he does not stop at Abraham. He traces it all the way to Adam. Luke is wanting to emphasise that the gospel is not just good news for the descendants of Abraham. It is good news for the whole world.3

While the Synoptics are remarkably similar, there are differences. Some people are bothered by these differences.

Sometimes these differences are important. Sometimes they are an attempt by one of the writers to explain what Jesus meant rather than to record his exact words. For example, Matthew may be recording the words of Jesus in Matthew 24:15. He may expect his (mostly Jewish) readers to be familiar with the book of Daniel and to understand what Jesus intended by his reference to Daniel. Luke, evidently writing for a Greek who would not have known the passage in Daniel, seems to give the intent of what Jesus said rather than the words (Lk 21:20). In a case like that, having two inspired accounts is of great help to us in understanding what Jesus intended.

Sometimes the differences provide us with no additional information. They may even seem almost contradictory. When I come to a passage like that, it reminds me of our days in Nigeria, and my work on the discipline committee of the Nigerian Christian Bible College. On one occasion we had to investigate the case of a disagreement between two students. They were from different tribes. They were from tribes that historically had been enemies.

When we sent for members of one of these tribes, the answers they gave regarding what they had witnessed were in basic agreement, but they were not identical. Some members of that tribe were even willing to admit that their tribe mate had pushed the other student during the argument.

Members of the other tribe, however, told the story exactly alike, without a single difference. Their tribe mate had done absolutely nothing wrong according to what they said.

Which group of students should we believe?

Even though most members of the committee were of the second tribe, we became suspicious when all the students from that tribe told exactly the same story with no variation at all. A little more investigation revealed that they had met together and agreed what to say. They were not telling the story individually but had agreed to harmonise their accounts. They had also agreed to leave out the fact that their tribe mate had entered the room of the other student and had been caught in the act of taking the other student’s radio.

The natural variation in how the story was told by the first group of students made their accounts more believable. The fact that they were even willing to admit some wrongdoing on the part of their tribe mate indicated truthfulness.

In the gospel accounts, we find natural differences. We also find admission of extensive wrongdoing on the part of the Apostles. We find a human Jesus. He became weary, hungry, and thirsty. In the false (apocryphal) gospels we do not find this. Those false gospels present a completely supernatural Jesus.

Yes, some differences in the accounts are hard to understand. But the fact that they are present reminds us of the honesty of the Bible. Our gospel accounts were not cooked up by men determined to present exactly the same story, from exactly the same point of view, with no differences allowed. These accounts were written by men who had an exciting story to tell. Each told it in his own way and in his own order. The Synoptic writers are similar in their point of view and in their order. But they are not identical. As in real life, that is a mark of truthfulness.

2 James W. Scott (1986) Luke’s Preface and the Synoptic Problem. A Thesis Submitted for the degree of PhD at the University of St Andrews. https://research-repository.st-andrews.ac.uk/handle/10023/8792

3 These two genealogies are a puzzle to many Bible students. While we can see why one stops at Abraham and the other goes back to Adam, there are other differences that are more difficult. There are many possible explanations of the differences. Students who are interested in this question should check the standard reference works, such as the article on the “Genealogy of Jesus Christ” by F.F. Bruce in the New Bible Dictionary. I have also found the discussion of the genealogies in some commentaries to be interesting. Those by Lenski, Geldenhuys, and Garland (in their respective commentaries on Luke), were particularly interesting. But none claim to answer all the questions one might wish to raise.

My own genealogy has led me to take little interest in this non-problem. Russell Hobart Hill served as my paternal grandfather. But he was not the legal father (nor the biological father) of my father. So, he might, or might not, be listed if someone were to write up my genealogy. Arthur Veyon was my maternal grandfather. But he was not given that name at birth. The name given to him at birth was Arthur Robinson. He was adopted by the Veyon family later (after his biological father disappeared and was presumed dead). My genealogy could be written several different ways. So, it does not surprise me to find differences in the way Matthew and Luke record the genealogy of Jesus.