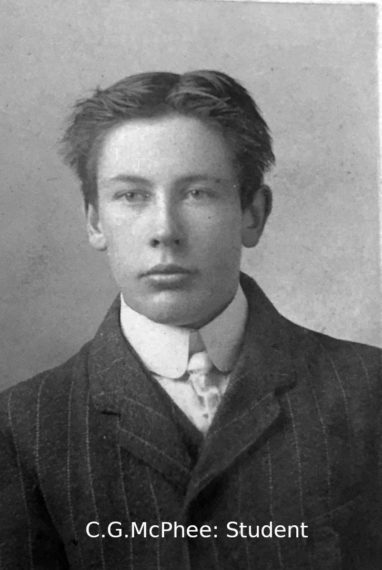 Pictured is a bankers box that contains the records of the life and ministry of Charles Gordon McPhee. Of the thirty-five files that are included, are those that Gordon developed during his day-to-day ministry. Also included are files added subsequently about his life and ministry, gathered from a variety of sources. His personal files were preserved by his family, and presented in 1981 by his daughter, Ruth Wilson, to the library of Great Lakes Christian College, in Beamsville. They were later transferred to the archives of the Canadian Churches of Christ Historical Society. As noted above, these archives were held first in Meaford, Ontario, and then moved to McPhee Hall in Beamsville. Appreciation is extended to the CCCHS for making these files available for this study.

Charles Gordon MacPhee was born July 25, 1892, at Nine Mile River, Hants County, Nova Scotia. His parents were Charles, a farmer, and Emily MacPhee. Emily, of Scottish descent, came from Halifax and settled in Nine Mile River. C. G. was the youngest of four children: a sister, Annie, and two brothers, Henry and Cyril Stanley. The family was reported to be staunch Presbyterians. (Years later, C. G. McPhee remembered: “Being raised among Presbyterians, by a Presbyterian mother, and all my ancestors being the same…”) His family spelled their name, “MacPhee,” the spelling that Gordon adhered to until his move to Nashville in 1915, when he shortened it to “McPhee.” (I have been assured that there is no national or religious significance to either mode of spelling.) Family lore remembers a preacher, John Wright, passing by when C. G. was just two or three days old. His father invited him in to see “the little baby preacher.”
Sadly, Gordon’s father passed away shortly after he was born. The family moved first to Cape Breton Island for a year, and then back to Nova Scotia where Gordon was boarded out in two homes. Gordon was three when his mother remarried, the family moving to Upper Rawdon. He was twelve when his mother passed away. He then went to live with the Joshua Wallace family in Centre Gore, Hants County, attending church meetings at the West Gore Church of Christ. In May, 1907, at age fifteen, Gordon was baptized into Christ, one of ten, at a meeting conducted by A. J. McCloud, at the Nine Mile River Church of Christ. He was 18 years old when he preached his first sermon, at Nine Mile River. It is said, “He had to walk twelve miles through snow up to his knees to get there!”

The events that occurred during the next eight years, 1908-1915, in the normally placid central Nova Scotia, were remarkable, unique, and powerful in shaping Gordon’s life. In 1909, at age 18, Gordon determined to become a preacher. He had found strong influences at the West Gore Church of Christ, particularly among the McDougalls, McDonalds, and Wallace families.

(1) 1908-09. Ora Hubert (“O. H.”) Tallman, from Ontario, came to serve as “evangelist” for Hants County, supported by the West Gore Church of Christ. The Tallman brothers, including O. H.’s younger brother, Ozro Ellis (“O. E.”) Tallman, growing up on a farm near Smithville, Ontario, had experienced the spreading
Bible school influence centered in Nashville, Tennessee. Students from the Nashville Bible School, (cofounded in 1891 by David Lipscomb and James A. Harding), had planted two similar schools in Canada: Carman Bible School (1899-1902) in Carman, Manitoba, by Abraham Foster; and Beamsville Bible School (1902-1916) in Ontario, by Sim Malious Jones. The Tallman brothers studied for two years at Carman, and O. H. studied for two years at the Beamsville school. Then the brothers headed to Bowling Green, KY, where James Harding (having left his work as president of Nashville Bible School) had opened, in 1901, the Potter Bible College. Here, the brothers earned their B.A and B.S. degrees by 1907. Both continued at Potter for the next year, serving as teachers of science and language. During the summers, the brothers held productive Gospel meetings in Kentucky and Tennessee. In 1908, O. H. went to serve as evangelist in Nova Scotia; O. E. went with Harding and several Potter teachers to open a new school, Western Bible and Literary College, at Odessa, MO.

Donald McDougall, a leader in the West Gore Church of Christ, wrote in the April, 1909 issue of The Bible Student, “An educational institute where the Bible itself … is made the chief study and predominating influence would be perhaps the most effective force that could be employed in this great work.” It was McDougall’s suggestion that the school be named, “Maritime Bible and Literary College.” McDougall also claimed to have recruited O. E. Tallman to come and be number two in the college’s operation.

Two acres of land in West Gore were donated for the college campus by Mabel (Wallace) Covey, widow of John E. Covey, parents of Harold Covey. She who would later marry O. E. Tallman.

“One Saturday morning in May, 1909, a notable collection of workmen, including farmers with teams of horses, men and boys with picks and shovels, and bars, etc. were observed…” (quite probably Gordon MacPhee was included!), gathered to build the college building.

(3) 1910-1915. The school was designed to include three years of high school and four years of college. Gordon’s six years of studies included activity in preaching, and “made his living by working in lumber woods, cutting wood and working on a farm.” In 1913, it was announced in the Bible Student that C. G. MacPhee would serve as evangelist for the reactivated River John, Nova Scotia, congregation (the first to be established in that province, 1815). In fact, it was C. G. McPhee, with the help of a fellow student, Fred McMadden, that the congregation was reactivated.

Sadly, after its sixth year of operation, 1914-15, due to the dislocations of World War I and trouble in the West Gore Church of Christ, the Maritime Bible and Literary College closed its doors. C. G. MacPhee may well have been the last to receive a degree from the college. In early summer, Gordon travelled with the O. E. Tallman family, including O. E.’s wife, Mabel, stepson Harold Covey, and young Oliver, and baby Lena, to O. E.’s childhood home, the farm, Evergreen Hill, near Smithville, Ontario. Then in late summer, Gordon journeyed by train to Nashville, Tennessee, where he enrolled in Nashville Bible School, as a Junior student, where H. Leo Boles served as president. (Harold Covey, 1900-1920, died of the Spanish Flu, and is buried in the Jacob Snure Cemetery, Jordan, Ont. O. E. and Mabel Tallman had two more children, Ora Hiram (“O. H.”), and Erma.)