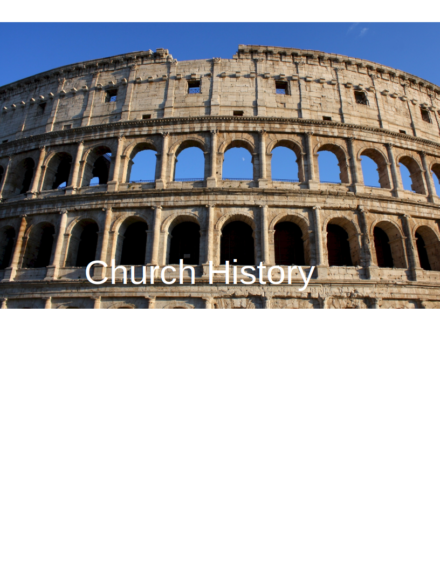 As restorationist Christians, we are very familiar with, and hold to, the pattern of Christianity found in the New Testament portion of the Bible. But, as we look around, we see a huge array of various beliefs and practices, gathered under the umbrella term ‘Christianity’

For this study, most comes from “Introduction to The History of Christianity”, Third Revision, Fortress Press 1995, Edited by Dr Tim Dowley.

Supplemental material comes from a variety of sources – Including Wikipedia (that most certain of all sources ) which I generally try to cross reference to at least one other source.

More generally – where the material comes from

Archaeology – examining physical remains – also sheds some light, but not as much.

Some Thoughts on Why Study History

People live in the present, and have direct knowledge only of the present and of our own life times.

Christianity – and Judaism before it – are historical religions.

History / archaeology doesn’t seek to prove anything, but rather to try to build a picture of an age or society or series of events.

God also works in His people, and in movements.

The Close of the New Testament / Apostolic age

The Apostles have died, but there are Christians who knew them and had been taught by them.

Churches have been established in Judea and Samaria, throughout Asia Minor, in Greece, and Italy

Christianity is a separate religion than Judaism, but not yet generally recognized as such in the Roman Empire.

The New Testament content had been authored, and was in circulation as individual documents, but had not yet been collected into one coherent whole.

The Roman Empire was at its greatest size around 117 AD

Rome was a slave holding empire

Christianity in the Second and Third Centuries

Paul’s writings had been collected probably by about the end of the first century (in I Clement ca 100AD they were accepted on an equal basis with other scripture), and certainly by 140AD (time of Marcion), and were being circulated.

Various attempts had been made by individuals and groups to create an accepted collection of writings into a ‘canon’ (from the Greek word meaning ‘measuring rod’, or ‘standard’)

One of the things that this means is that during the first three centuries of the Christian church after the close of the apostolic age, there was no generally accepted collection of NT Scripture.

Christian writers, whose works have survived (or substantially survived), from the second and third centuries.

These aren’t scripture by any means, but they have value is in several areas:

Here are a few:

Some examples of invalid teachings which are addressed in the NT:

Other teachings came along after the close of the NT, which also needed addressing. Here are a few:

Not a single movement, but a collection of similar religious movements.

These ‘spiritual’ individuals are ignorant of their heavenly origins

Since salvation depended solely on this secret knowledge, some Gnostics indulged in extremely licentious behaviours – after all, the flesh doesn’t matter.

Other Gnostics went to the other extreme – asceticism

We know most about the Gnostic teachings through Christian writings of the second century, which viewed these movements as heretical.

There are communities of Gnostics (called ‘Mandaeans’) living today in Iran, Syria and Jordan. (A community of 60-70,000 was in Iraq until the war of 2003 when the survivors migrated to these other three countries, and to smaller communities around the world). Religious persecution exists against them, especially in Iran, where the community continues to dwindle.

A major Christian writer against Gnosticism was Irenaeus, a Church Father, in the late 2nd century.

Disagreements over the Nature of Christ

Where did His soul come from? What happened to the human soul, if there was one? If there wasn’t a human soul, then how could Jesus have been human?

Was Jesus created when He became human, or did he pre-exist?

These all led to various different teachings and heresies, and in many cases actual physical conflict.

Legal grounds were often obscure – possibly the major issue was refusing to offer to the emperor, and as a result being viewed as unpatriotic or even treasonous.

Other charges at times included:

There were periods where state sponsored persecution was substantially worse than at other times.

Persecution pretty much ended under Constantine (306-337)

What to do about Christians who had denounced their faith?

The mainstream church’s wrestling with the principle and reality of baptism led to some conclusions:

However – the question led to other issues:

Christianity also started as a primarily Jewish based movement

There are maps that show shaded regions as the church spread. They can give the impression that Christianity was widespread through these regions. However, early Christianity was localized in various cities and towns, and took time to spread into the countryside. The maps here show locations of known churches at the end of the first, second, and third centuries, leading up to the legalization of Christianity

A succession of statements of faith were made, attempting to summarize Christian beliefs.

A concept called the ‘Rule of Faith’ developed

Various types of writings were being produced.

By late first century, this model had mostly disappeared.

By Ignatius’ time (he wrote approx. 110-115 AD) he argued that there should be one ‘bishop’ in charge of each congregation, in order to prevent splits in the church and ensure that correct beliefs were preserved.

As Christianity spread and grew, and there was no longer a single congregation in a city, but multiple congregations both in cities and in the country-side, the bishop’s authority grew to take in all the churches within a region.

As a basis for apostolic authority in the developing church, the idea of ‘the teaching of the church, preserved unaltered and handed down in unbroken succession from the apostles.’ (Origen)

As time went on – several centres became more prominent than others

These bishops took on more and more recognition and authority.

Looking ahead some – when Islam conquered North Africa and Asia, that left only Rome and Constantinople of all these major centres.

Veneration of Martyrs and Saints

From early times, converts were baptized with little or no delay, as we see in the NT accounts.

Over time, however, instruction prior to baptism began to be customary – especially for non-Jewish converts.

The rationale for this was a changing view of what Baptism signified.

Some leading Christian writers worked to try to harmonize Scripture with Greek Philosophy.

Origin and Tertullian were heavily influenced by Greek philosophy, and their Christian writings reflect that.

PrevPreviousINA SMILES
NextShould We Make the Gospel Easier to Accept?Next