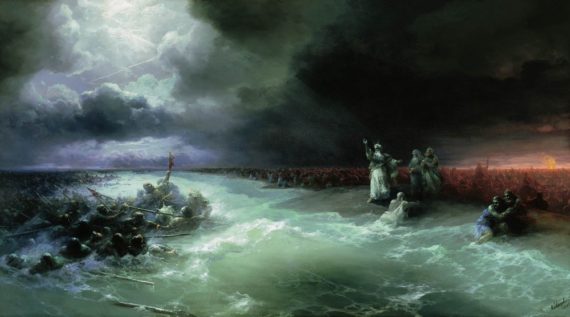 Without a doubt, the parting of the Red Sea is one of the greatest miracles God worked in the Old Testament. For centuries, its memory motivated Israel, caused them to repent from waywardness, and reminded them that faith can do mighty things. It is mentioned repeatedly in Psalms and rehearsed by several of the prophets. Two similar events with parting waters – both at the Jordan River – served to establish a new leader and a new prophet (Joshua in Joshua 3–4; Elisha in 2 Kings 2). And New Testament writers drew lessons from it to strengthen us today.

Before we look at the actual event, we would do well to see what was brewing just before. After the final plague, a beaten-up Pharaoh agreed to release Israel from slavery. Moses later wrote, “and the sons of Israel went up in martial array from the land of Egypt” (Ex.13:18), and “the sons of Israel were going out boldly” (14:8). It seems they left proudly, marching by their own strength instead of God’s. If that is the case, God would soon teach them better.

Instead of the assumed route up the Mediterranean coast, God brought them to Pi-hahiroth, essentially circling back from where they came, and right up against the Red Sea. This seems to have snapped Pharaoh out of his sorrows and into a full-fledged effort to chase Israel down. With the Red Sea cutting off a way of escape, Israel was suddenly trapped, frightened, and blaming Moses for everything. God was about to take this impossible situation and save Israel, destroying the Egyptian army in the process. But before we proceed, think about this: How many times have you been trapped by tough circumstances in life, and you felt powerless to proceed? The Red Sea reminds us that when man can’t save himself, but faith in God can.

It all seemed to happen at night. Israel huddled in the darkness as the Egyptian army approached. God sent His angel in the form of a glowing cloud to stand between the two camps (14:19-20). Then in the early morning hours Moses spoke his memorable words, “Do not fear! Stand by and see the salvation of the LORD which He will accomplish for you today; for the Egyptians whom you have seen today, you will never see them again forever. The LORD will fight for you while you keep silent” (14:13-14). Moses literally said, “Take your stand and see” (Footnote, NASV). Faith allows us to take a stand and see what God will do to help us.

Scholars and skeptics have debated how God parted the sea, some even suggest it was a natural phenomenon that took place fortuitously at the right time. But the scriptures clearly state it was an act of God accomplished by “a strong east wind all night, and turned the sea into dry land, so the waters were divided” (Ex.14:21-22). Moses further wrote that “the sons of Israel walked on dry land through the midst of the sea, and the waters were like a wall to them on their right hand and on their left” (verse 29). What is even more startling is that these things took place at the very moment Moses stretched out his hand over the sea (verse 21). Joshua, David and Ezra, all confirm it was a miraculous event, and that it should be remembered down through the centuries.

The victory is magnified even more by the destruction of Pharaoh’s army when they chased Israel down into the path through the sea. The dry ground became wet, their chariots malfunctioned, and confusion reigned. When Moses stretched out his hand a second time, the Red Sea filled in and drowned the entire Egyptian army, perhaps Pharaoh as well.

As remarkable as these events are, it is also notable that Israel began to grumble in the very next chapter (15) as they began their travels into the wilderness. It appeared they had no drinkable water, and in chapter 16 they became angry with Moses a second time when they ran out of food. While God quickly provided both, the weakness of their faith was on full display. How could all these people forget the power of their God so quickly? It is a human flaw that arises so easily. What one of us today has not forgotten the great things God has done in our lives as we succumb to discouragements and frustrations? We would do well to remember the many ways He has cared for us in the past and find the courage to keep on going despite current obstacles.

A great celebration took place on the shore of the Red Sea when Israel was safe, and the Egyptians had been eliminated in their watery grave. Exodus 15 records the song of Moses which was sung by a grateful people. Moses’ sister, Miriam, led a group of women in a second song of praise that answered the first. It was a song of victory, a “new song” because it expressed the new circumstances from that point on, and a new relationship with a victorious God.

What can we learn from the victory God won for Israel when He parted the Red Sea centuries ago?

1. First, we gain a warning. The apostle Paul spoke of this in 1 Cor.10:1–13. He pointed out that Israel’s experience through the waters is much like ours at Christian baptism. When they passed through the sea with watery walls on both sides plus God’s cloud above, it was like being immersed into Moses just as we are into Christ. But they later craved evil, became idolaters, acted immorally, tried the Lord, and grumbled against their leaders. Their pride wouldn’t let them see that they were vulnerable to sin, and they fell. Paul pointed out that “these things happened to them as an example, and they were written for our instruction” (v11). We can fall, just like Israel did through unfaithfulness and worldliness. We must be watchful.

2. Second, God can save us from great dangers and big discouragements. Nothing looked as hopeless to Israel than being trapped beside the sea with no escape available. We often feel that way in life when we face insurmountable odds and hopeless threats. Yet look at what God did for Israel! God can find a way for us too. Paul pointed out there is always a way of escape from temptation, just as God provided Israel with a way of escape through the sea (1 Corinthians10:13). Even the threat of human death with all its unknowns can be faced with confidence, for God will walk with us to the other side. Remember David’s words, “Even though I walk through the valley of the shadow of death, I will fear no evil, for Thou art with me” (Ps.23:4).

3. Third, courageous leaders can inspire God’s people in trying times. Moses didn’t fully know how God was about to save them, but he stood up and said, “The LORD will fight for you while you keep silent” (Ex.14:14). He had courage and faith, and God soon revealed how they were to proceed. Church leaders must lead with faith, confidence, and the wisdom that God can give. People will be comforted, challenged, and willing to follow.

4. We have plenty of reassurance from God. In Revelation 15:1–4 we find victorious Christians standing on a sea of glass, “And they sang the song of Moses the bond-servant of God and the song of the Lamb.” This is like Israel passing through the sea on dry ground. We are being reassured that no matter what future trials we may have to pass through, God will walk with us to the other side. There, we can sing of our great God and all He has done for us.

The great miracle at the Red Sea echoes throughout the pages of the Bible right down to the Book of Revelation. Like Moses standing on the shore, safe and victorious, we too sing the song of Moses today when God helps us pass through life’s trials, challenges, and uncertainties. “Great and marvelous are Thy works, O Lord God, the Almighty; righteous and true are Thy ways, Thou king of the nations” (Revelation 15:3).