Christ is Changeless and Eternal 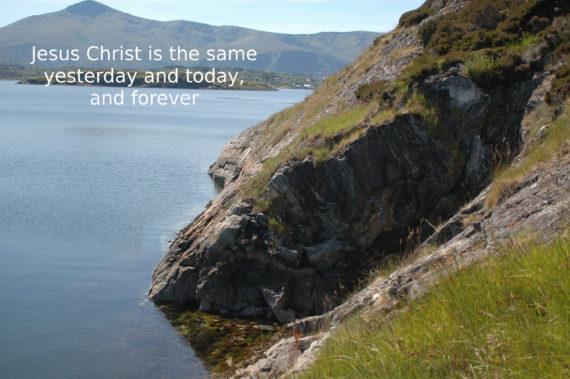 When the writer of Hebrews says: “Jesus Christ is the same” (Hebrews 13:8), he is ascribing immutability to Christ. This is an attribute of deity. God is changeless, immutable, His nature is not susceptible to variation.

The statement that Christ is the same, alludes to what is said of God in Psalm 102:25–27: “Of old You laid the foundation of the earth, and the heavens are the work of Your hands. They will perish, but You will endure; yes, they will all grow old like a garment; like a cloak You will change them, and they will be changed. But You are the same, and Your years will have no end.”

“But to the Son He says:
‘Your throne, O God, is forever and ever;
A scepter of righteousness is the scepter of Your kingdom.
You have loved righteousness and hated lawlessness;
Therefore God, Your God, has anointed You
With the oil of gladness more than Your companions.’
And:
‘You, Lord, in the beginning laid the foundation of the earth,
And the heavens are the work of Your hands.
They will perish, but You remain;
And they will all grow old like a garment;
Like a cloak You will fold them up,
And they will be changed.
But You are the same,
And Your years will not fail’” (Hebrews 1:8–12).

In chapter one, the immutability of Christ is contrasted with the continually changing universe that will pass away. “They will perish, but You will endure … They will be changed. But You are the same” (Psalm 102:26–27). “Jesus Christ is the same yesterday, today, and forever” (Hebrews 13:8).

Christ is without beginning or end.

God is self-existent, He always has existed and always shall exist. When the writer of Hebrews says: “Jesus Christ is the same, yesterday, today, and forever” (Hebrews 13:8), he is ascribing eternal, self-existence to Christ.

When God told Moses to rescue His people from Egypt, Moses asked: “When I come to the children of Israel and say to them, ‘The God of your fathers has sent me to you,’ and they say to me, ‘What is His name?’ what shall I say to them? And God said to Moses, ‘I AM WHO I AM.’ And He said, ‘Thus you shall say to the children of Israel, “I AM has sent me to you”’” (Exodus 3:13, 14). The one true God is self-existent. He is ‘I AM’, Infinite Being.

In Israel this became a sacred name for God. The Hebrew word, sometimes transliterated as Jehovah or Jaweh, is called the Tetragrammaton because it consists of four consonants. (The alphabet of ancient Hebrew did not have vowels.) The Tetragrammaton appears more than 6,000 times in the Old Testament.

For the Israelites, this name was so sacred that they would not even pronounce it. Thus, when the Scriptures were read aloud, the Hebrew word for ‘Lord’ was read instead.

New Testament writers, in their quotations of Old Testament passages, apply the Holy Name, Jaweh, the Ever-Existing One, to the Son as well as to the Father.

In Isaiah 40:3 we find a prophesy of the work of John the Baptist: “The voice of one crying in the wilderness: ‘Prepare the way of the LORD [Jaweh]; make straight in the desert a highway for our God.’” According to Mark 1:1-4, the LORD for whom John was to prepare the way, is Christ.

In a vision, Isaiah saw “the King, the LORD [Jaweh] of hosts” (Isaiah 6:5). Alluding to this passage, John says in John 12:41 that Isaiah saw the glory of Christ.

In Joel 2:32, after God promised to pour out His Spirit, the promise is also made “that whoever calls on the name of the LORD [Jaweh] shall be saved.” In Romans 10:8–13 this passage is quoted and applied to Christ.

Not only the Father, but also the Son, is Jaweh (the Ever-Existing One). In the light of this we understand why Jesus said to the Jews: “Most assuredly, I say to you, before Abraham was, I AM” (John 8:58). The Jews understood what He meant as well, and tried to kill Him. Both the Father and the Son are ‘I AM’.

“Jesus Christ is the same, yesterday, today, and forever” (Hebrews 13:8). He is changeless and without beginning or end.