Book of Titus: A Gem -Introduction to Titus 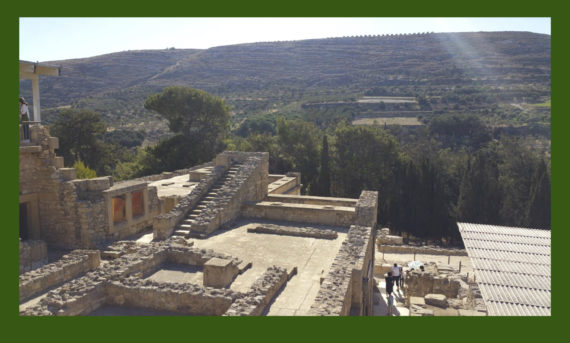 1 – To Crete, which Paul had passed by on his voyage to Rome, and where after some undisclosed time spent on the Island he left Titus to continue the ministry there, Titus 1:5.

3 – To Troas, where Paul left Carpus and his coat, and possibly his books and parchments, 2 Timothy 4:13.

The Island of Crete

The Island of Crete (formerly known as Candia when a colony of Venice) is in the southern portion of the Aegean Sea which is a branch of the Mediterranean Sea. Crete is 160 miles long and 35 miles wide at its widest point, with 3,219 square miles in total area. It features lowland hills to the east and a central mountainous ridge to the west with one mountain of over 8,000 feet. The central Messara Valley is a rich alluvial plain. Homer spoke of the 100 cities of Crete (Illiad 2.649), the Hellenistic period identified 40 towns, and the Roman period 20. Philo identified a Jewish community on Crete.

Paul first saw Crete from the deck of a ship that was “coasting” along the south shore westward from Salmone to Lasea. He was a prisoner of the Roman centurion, Julian, being transported from Caesarea to Rome. They had changed ships at Myra in Lycia, boarding a grain transport from Alexandria. Sailing with difficulty, “under the lee of Crete…we came to a place called Fair Havens.” Against Paul’s advice, the owner and the pilot of the ship along with the centurion determined to winter at Phoenix. But they were struck by a strong northeaster, driving them out to sea… (see Acts 27).

It is quite possible that there were already believers on the Island when Paul and Titus arrived. Cretan Jews attended the Pentecost feast in Jerusalem and heard Peter’s inaugural Gospel sermon (see Acts 2:11). Were some of these among the 3,000 who obeyed the Gospel on that day? Titus was written ca. AD 63, some thirty years after that Pentecost. During that period Christianity had spread throughout the Roman world, including nearby Achaia with Corinth and the Peloponnese. One of the problems that plagued the Gentile church were Judaizing teachers. These appeared to be already present in Crete when the missionaries arrived (see Titus 1:13, 14; 3:9). Thus their mission included both evangelism and church building.

So we ponder, did Paul see the Island beckoning for the Gospel as he “coasted” by? Did this prompt him to return to Crete shortly after he won his freedom in Rome to proclaim the Lord Jesus there?

Titus is mentioned in the NT thirteen times. He was a long-time friend, fellow-believer, and co-worker in the Gospel with Paul. He accompanied Paul on his mission to Crete, and remained there to complete the work begun.

In ca. AD 50, Titus accompanied Paul and Barnabas at that decisive council of “elders and apostles” that met in Jerusalem to consider if Gentile believers were required to keep the Law (see Acts 15:1-21). Paul wrote to the Galatians concerning this meeting, “I took Titus along with me” (Galatians 2:1). And Titus became sort of a case study, as Paul said, “But even Titus…was not forced to be circumcised” (vs. 3).

Titus was important to Paul in his relation with the church at Corinth. In his second letter to this church, Paul acknowledged that he anticipated word concerning them from Titus when he arrived in Troas, but Titus was not there (2 Corinthians 2:12–13). Paul went on to Macedonia where he was under great stress. The subsequent arrival of Titus was a godsend for Paul, “But God, who comforts the downcast, comforted us by the coming of Titus, and not only by his coming but also by the comfort with which he comforted you, as he told us of your longing, your mourning, your zeal for me, so that I rejoiced still more” (2 Corinthians 7:6, 7). Thus Titus was a source of encouragement to the Corinthian church in this difficult time: Paul wrote, “And besides our own comfort, we rejoiced still more at the joy of Titus, because his spirit has been refreshed by all of you. For whatever boasts I made to him about you, I was not put to shame. But just as everything we said to you is true, so also our boasting before Titus has proved true. And his affection for you is even greater, as he remembers the obedience of you all, how you received him with fear and trembling” (2 Cor. 7:13b–15).

Paul had undertaken a major effort of charity—in which the poor Jewish believers of Judea would receive charitable assistance from the Gentile believers of Macedonia and Greece. Paul wrote, “Accordingly, we urged Titus that as he has had started, so he should complete among you this act of grace” (2 Corinthians 8:6). Later in his Letter to the Corinthians in this regard, Paul again spoke of the value of Titus: “But thanks be to God who put into the heart of Titus the same earnest care I have for you. For he not only accepted our appeal, but being himself very earnest he is going to you of his own accord. With him we are sending the brother who is famous among all the churches…. As for Titus, he is my partner and fellow worker for your benefit” (vs. 16–17, 23). In closing his letter to the Corinthians, Paul wrote, “Did I take advantage of you through any of those whom I sent to you? I urged Titus to go…. Did Titus take advantage of you? Did we not act in the same spirit?” (2 Corinthians 12:17–18).

In Paul’s Letter to Titus, he refers to Titus, “…my true child in a common faith” (Titus 1:4). After completing his mission in Crete, Titus would be replaced by either Artemas or Tychicus, and Paul hoped to see Titus in Nicopolis over the winter (Titus 3:12).

Three highlights of spiritual grace that make this letter a gem:

1) The greeting, “Paul, a servant of God and an apostle of Jesus Christ, for the sake of the faith of God’s elect and their knowledge of the truth, which accords with godliness, in hope of eternal life, which God, who never lies, promised before the ages began, and at the proper time manifested in his word through the preaching with which I have been entrusted by the command of God the Father and Christ Jesus our Saviour” (Titus 1:1b–3).

2) The wonder, “For the grace of God has appeared, bringing salvation for all people, training us to renounce ungodliness and worldly passions, and to live self-controlled, upright, and godly lives in the present age, waiting for our blessed hope, the appearing of the glory of our great God and Saviour Jesus Christ, who gave himself for us to redeem us from all lawlessness and to purify for himself a people for his own possession who are zealous for good works” (Titus 2:11–14).

3) The work, “But when the goodness and loving kindness of God our Saviour appeared, he saved us, not because of the works done by us in righteousness, but according to his own mercy, by the washing of regeneration and renewal of the Holy Spirit, whom he poured out on us richly through Jesus Christ , our Saviour, so that being justified by his grace we might become heirs according to the hope of eternal life” (Tit. 3:4–7).

These three passages are each one continuous sentence in the original Koine Greek. In English they would be considered run-on sentences. (A number of translations break them into shorter sentences; the ESV, used here, maintains the original continuity.) But in the original they are a study of carefully crafted statements.

The letter includes qualifications for elders, marking of the Judaizers, and citing Christian duty according to age and citizenship. Paul emphasizes the importance of good works: 1:16, 2:7, 2:14, 3:1; 3:8; 3:14.