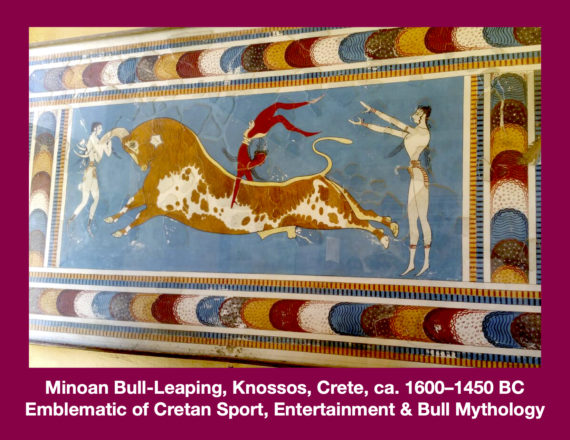 Elders and those appointing them know Titus 1:5–9 well. We are less familiar with the history of Crete that made their appointment so urgent. Near the heart of Paul’s imperatives for Titus is his affirmation of an ancient statement of mysterious origins: “Cretans are always liars, evil beasts, lazy gluttons” (literally, “idle bellies,” 1:12).

What can we learn from the history of 1st century Cretans to benefit us in the 21st century as we apply our lives to the truths of Titus?

The categorical condemnation affirmed by an Apostle of Jesus may strike 21st century ears as harsh but it is far from the first of God’s strong convicting words for nations. Lest we doubt Paul’s meaning, he affirms “This testimony is true” (1:13).

This scathing generalisation of Cretan character that Paul quotes and affirms is attributed to the legendary semi-mythical Greek philosopher-poet Epimenides (ca. 600 BC). Paul calls him “a prophet of their own” (1:12).

Recognizing the intertwining of myth and reality in early Cretan and later Greco-Roman culture guides us in understanding legends surrounding Epimenides, his statement, 1st century culture on Crete, and how myths persist in 21st century culture all around us.

Myths, though fictitious, heavily impact what people think and do in reality. You know two of many examples in Scripture. Artemis (Diana), goddess of childbirth and the hunt, was a fictitious deity whose towering statue stood in her Ephesian temple, one of the seven wonders of the world and several times the size of the Parthenon. Though mythological, she generated great real wealth and reputation for Ephesus (Acts 19). Athens (still known as Athena by Greeks today), was and is a city whose skyline is dominated by temples to Athena which still generate wealth through tourism. Government building in Canada have facades that copy ancient Greek pagan temples. Myths impacted reality then and there and still do, now and here.

According to Greek mythology, Zeus, father of the Olympian gods, was born in a cave in Crete, perhaps atop its highest mountain, Mount Ida. Purportedly, while seeking a lost sheep of his father, Epimenides fell asleep in the cave for five to ten decades. Upon waking, he had a long beard and medical, prophetic and priestly cleansing powers. Since Epimenides believed Zeus was an immortal god, he was very upset by his fellow Cretan’s claim that Zeus was mortal and buried on Crete. This lead to the famous statement quoted by Paul. (Some associate Epimenides with the philosophical “liar paradox.” By its logic Epimenides’ statement would be false since he was a Cretan. Paul, however, as an Apostle inspired by God, concurs with the ancient Cretan saying, and appealed to Cretan Christians by using their own familiar terms.)

Looking further back to the Bronze Age, the Minoan era of Crete (ca. 3000–1400 BC) was the first sophisticated European culture predating Abraham and continuing past the life of Moses. The remains of the Minoan palace and labyrinth at Knossos (aka Cnossus) vividly illustrate the sophistication of Minoan art, architecture, polychrome pottery, agriculture, language and government. Piracy and slave trading were present in the eastern Mediterranean. The Minoan navy battled piracy in the “Golden Sea” around Crete, so called because of the area’s lucrative slave trade.

Minoan culture’s namesake King Minos exhibits more of the intricate weave of myth and reality. His name forms part of “Minotaur” the mythical bull-man (Minos + Taurus “bull”). The palace labyrinth supposedly contained the Minotaur until he was slain by Theseus, legendary founder of Athens. These myths live on in art, in literature as well as board and virtual games which captivate millions and are played by people around the world today, including church members.

During the Mycenaean period (ca. 1600–1100 BC) an earthquake and Greeks from the mainland overtook Minoan culture. The “Greek Dark Ages” followed (ca. 1100–800 BC). Independent city states flourished in the Archaic period (ca. 800–480 BC). Wars between city states and aristocrats weakened the unity and influence of Crete.

In the Greek “Golden Age” (ca. 500–300 BC) the writings of Homer, Hesiod and the worship of mythical deities of the Greek pantheon, flourished, including several mentioned in Scripture: Zeus (Jupiter) father of the Olympian gods, Hermes (Mercury), Artemis (Diana), Castor and Pollux (Acts 14, 19, 28:11), and indirectly Epaphroditus (“belonging to Aphrodite,” Philippians 2:25). The impacts of Greek philosophy increased. Examples include the Epicureans, espousers of enjoyment, and the Stoics, promoters of self-control, who critically called Paul a scavenger (“seed picker,” one picking up scraps of knowledge; Acts 17:18).

Greek speaking diaspora Jews were among immigrants to Crete. Josephus (Against Apion 1.22) recounts Clearchus’ record of Aristotle (ca. 388–322 BC) meeting a Jew from Celesyria fluent in Greek language and culture. Synagogues are known on the Aegean islands from ca. 150 BC. Believers from Crete were in Jerusalem on the Day of Pentecost (Acts 2:11). Jews brought their own myths (mythois, μύθοις, 1:14) to Crete. Jews mandating circumcision as essential for Christian men were among those whom Paul singles out as “rebellious people, empty talkers and deceivers…who must be silenced because they are upsetting whole families, teaching things they should not teach for the sake of dishonest gain” (1:10–11).

Finally, Rome conquered Crete in 66 BC, made it a Roman province and brought their versions of the pagan pantheon, agriculture, art, slavery and material prosperity.

As we are now, Christians on Crete were a minority saved by God’s grace (1:2–3; 2:11–14; 3:3–8) charged with godly living and proactive compassionate service (2:1–3:15). Within a culture of pagan gods and myths, they had to swim upstream counter-culturally while keeping themselves pure (1:15).

I hope the brief panorama above is enough to convince you that 1st century myths literally and figuratively live on in our 21st century culture. They and their genres have entered the electronic age in physical and digital forms: art, fantasy literature, science fiction, board games, over 80 virtual video games, movies, architecture and hero worship of mythological proportions.

In the 21st century, as in the 1st, mythology impacts reality. Like Epimenides and King Minos, real and digital people today take on mythical heroic superhuman powers that influence real values and behaviour. The explosion of digital technology fuels the entertainment worldview forming value sets and generating vast expenditures of money and time.

Perhaps near the heart of these phenomena is the desire to connect with something greater beyond the mortal sphere, in short, the immortal, another obsession of ancient culture and its mythology and philosophy.

Titus (and Timothy) are too often portrayed as only practical. However, at the heart of Paul’s admonitions to Titus on how the Cretan Christians are to overcome these mortal affections and myths to live the eternal life (1:2) are deep expositions of the gospel, the grace and the infinite might of the awesome Creator of the universe in the saving power of His Son (1:2–3; 2:11–14; 3:3–8).

Though Paul charged Titus to appoint elders in every city (1:5), most churches today do not have elders. Fortunately, God equips us all with His eternal power through His Word, His Spirit, His mercy and His grace. We are responsible to use them to be pure and eager for good deeds, to meet pressing needs, to help others exchange 21st century mythological power for the real power of God in the gospel and to join us in “looking for the blessed hope and the appearing of the glory of our great God and Saviour, Christ Jesus” (2:13).

Comments in this article about Crete and Cretan culture are intended to pertain only to what we know of their ancient history. Though I have been to Crete to learn about its history, the palace and labyrinth at Knossos and from the excellent museum in Heraklion, I have limited knowledge of Crete’s 21st century culture and intend no reflections on it. The focus of the comments on 21st century mythology in this article pertain primarily to our North American context and its global impacts and significant influences in our congregations about which we in the church will do well to be thoroughly informed.