Blasphemy Against the Holy Spirit 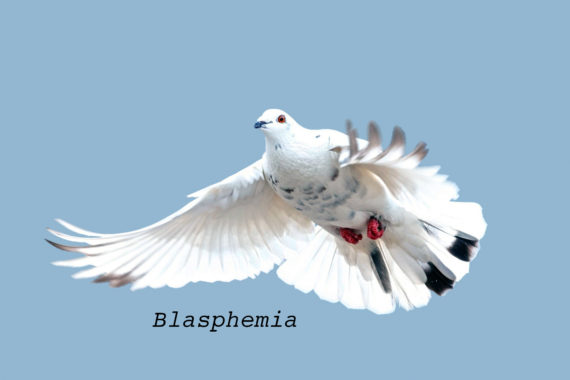 What does it mean to blaspheme?

The Jews accused Jesus of blasphemy when He made Himself out to be God (equal with God) even though He was a man. They felt that such blasphemy was deserving of death by stoning (Jn.5:17-18; 10:31-33). In Lev. 24:16 we read that if anyone blasphemed the name of the Lord, they should then be put to death by being stoned. Paul admits that before he became a Christian he tried to force Christians in the synagogues to blaspheme. (Acts 26:11). Later in the synagogue when Paul spoke of the kingdom of God, the Jews after listening to him, spoke evil of the Way (Christ & His church – Acts 19:8-9). Paul delivered over to Satan (withdrew fellowship from) Hymenaeus & Alexander so that they would be taught not to blaspheme (I Tim.1:18-20). When addressing certain members in the church who catered to rich visitors in their assemblies, James reminds them that it was the rich who blasphemed the fair name (Christian) by which they have been called (James 2:1-7).

When Jesus claimed equality with God and performed miracles to prove His deity, some of those present declared it blasphemy. After all, Jesus had said, “I am the way, and the truth, and the life; no one comes to the Father, but through Me” (Jn.14:6) and ” … He who has seen Me has seen the Father…” (Jn.14:9). There was no mistaking what He meant. If these statements were not true, then they falsely claimed that a mere man was actually the creator himself. Yet if Jesus really was ‘God in the flesh’ then no blasphemy took place. For as the scriptures explain, He is the radiance of God’s glory and the exact representation of His nature (Heb.1:1-3). Jesus alone could make such a claim and not speak injuriously against God.

Jesus addressed his remarks in Matt.12:30-32 to the Pharisees who did not agree with the crowd’s assessment. The multitudes were becoming convinced that Jesus was actually the Messiah. Since Jesus had healed a man who was blind and dumb and in the process cast out the demon that possessed him, it was hard to imagine that the Messiah would do more.

Now it seems odd that the Pharisees did not consider the possibility that Jesus was telling the truth. Why was that? It did not seem to matter that He exercised miraculous power supplied by the Holy Spirit, that He fulfilled scripture or that His reasoning was always sound. The Pharisees found a way to avoid the conclusion that was obvious to others. In so doing, they not only resisted the Holy Spirit, they denied His involvement in the life and work of Jesus.

In Matt.12:28 Jesus said that He had cast out the demon in this man by the Spirit of God. He wanted them to understand that they could not reject His claims without also denying the miraculous power of God’s Spirit which was at work in Him. Since they could not deny the actual miracle, they chose instead to attribute the power that was at work – to Satan. They admitted that Jesus was casting out demons, but accused Him of doing so by the power of Beelzebul the ruler of the demons (Matt.12:24). They insulted and rejected the Spirit of God while crediting Satan with the work that God was doing.

The Jewish leader had done this before.

When Jesus cast out a demon by power of God’s Spirit the multitudes exclaimed that, “…nothing like this was ever seen in Israel”. The Pharisees replied, He cast out the demons by the ruler of the demons” (Matt.9:32-34).

Jesus taught that this kind of rejection was part of the cost of discipleship when He said:

“It is enough for the disciple that he become as his teacher, and the slave as his master. If they have called the head of the house Beelzebul, how much more the members of his household” (Matt.10:24-26).

In other words, if they call me Satan, then what do you think they’ll say about you who are My disciples? They’ll say that and worse about you.

The martyrdom of Stephen is a graphic illustration of how this prophecy came true. Moved by the Holy Spirit, Stephen accused the Jewish leaders of resisting the Holy Spirit, the very thing that led to his murder.

“You men who are stiff-necked and uncircumcised in heart and ears are always resisting the Holy Spirit; you are doing just as your fathers did.” (Acts 7:51)

Now it’s important to remember that the Pharisees, chief priests and Israelite elders, all believed in God. Yet they chose to continually reject, oppose, and to speak evil of the work of God’s Holy Spirit among them. Living in an age when God’s Messianic prophecies were being fulfilled, they rejected God’s Messiah, and with Him their hope or future with God.

No wonder Jesus wept over Jerusalem (Matt.23:37-39). He knew that wilful continual rejection of God’s Holy Spirit would make that city the place of His wrongful death and reduce it to rubble in the space of a generation. It was hard for the leaders to accept that God’s covenant with Israel was being replaced by one universal in scope. While the Jews were given the ‘first right of refusal’, the gospel of Jesus Christ was intended for all (Rom.1:16-17) and quite often attention was given to the Gentiles precisely because the Jews refused to listen.

In Part 2, we will begin with the question: “Is it possible for Christians to blaspheme against the Holy Spirit today?”