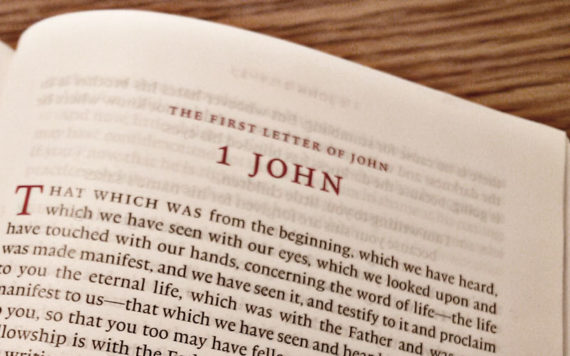 “Beloved, do not believe every spirit, but test the spirits to see whether they are from God; because many false prophets have gone out into the world. By this you know the Spirit of God: every spirit that confesses that Jesus Christ has come in the flesh is from God; and ever spirit that does not confess Jesus is not from God; and this is the spirit of the anti-christ, of which you have heard that it is coming, and now it is already in the world” (I John.4:1-3).

What do we know about the ‘spirits’ to whom John referred?

The spirits were people who claimed that their message was from God and was true. John therefore reminded the church that such claims needed to be tested (put to the test). They did this by comparing any new message with the one that God had already revealed to them through the Apostles. Anyone whose message did not agree with what the apostles had taught was identified as a false prophet. Some of these had gone out from the early church into the world promoting a teaching that was not from God.

What is this new teaching?

I John.4:1-3 tells us that they denied that Jesus Christ had come from God and had lived on earth as a man. They claimed that those who believed that Jesus had done so were believing a lie and had misplaced their trust by hoping in Him. So contrary was this new doctrine ,that those who promoted it were called anti-christs by the apostle John. John warned the early church so that they would be prepared for the full arrival of the anti-christs, though some were already present. (I John 4:3).

The re-assurance of the Apostle John to the early church was quite clear.

John said in effect: “don’t allow anyone who has the spirit of the anti-christ upset your conviction that you are from God”.

In the first century, opposition to the gospel of Jesus came from many quarters. Jewish opponents and even Jewish Christians called aspects of the gospel into question and struggled to accept the practices of the church. (Acts 15)

It’s no wonder then that many New Testament scriptures reassured Christians that they were indeed saved and had in fact become the children of God (Jn.3:16; 10:9; Mk.16:16; Acts 2:21; Rom.10:13). The Mosaic covenant was no longer in effect and those who clung to it did so at the peril of their souls.

The church faces its own challenges today when religious people take scriptures like I Jn.4:1-3 out of context.

In our time, very few religious groups who claim to follow Jesus, combine that with a denial of his humanity. Most confess what John insists that we must – that Jesus of Nazareth is the Son of God. One might be tempted then to conclude that this is the only matter of faith that believers in Jesus must ‘get right’ in order to be saved.

It is in fact the first of many things that we need to get right and must be given its proper weight. But as we will see, faith in Jesus as the Son of God, while necessary for salvation does not exhaust the responses that God calls for to accomplish that end.

One of the first things that the gospel informs us of is that we are sinners and in need of forgiveness. We also learn that Jesus came from heaven to earth to offer himself as a sacrifice for our sins. God calls on us then to confess faith in Jesus as the Son of God and as the sacrifice that God has accepted on our behalf. Confession is one of those necessary things. Recognizing that our sins are the problem, God also calls on us to repent of sin by renouncing it and by taking steps to put it out of our lives.

The scriptures also teach that in order to be saved, we must be baptized into Christ for the forgiveness of our sins. This is how the benefits of Jesus’ sacrifice are applied to us and the act or event necessary for such to take place.

Each of these requirements may be said to ‘save’ us…yet no one of them may be separated from the others. Complete obedience is called for in order for a sinner to be saved.

The apostle John stated that some who seemed to part of the church, were actually never so. The same is surely true today. The scriptures in their entirety must serve as our guide to determining who is saved and who is not. This is not for the purpose of excluding anyone, but for the benefit of those who may be unaware that there is something that they still need to do to receive salvation.

As the Apostle Paul did not fail to declare the whole counsel of God, we must also must not fail to obey each of the commands contained therein.

Given that salvation is at stake, let us be as diligent as possible when studying the scriptures. Let us make sure that we understand the context of each passage and study each particular subject in a comprehensive way.

That point of attack may change, but our faith must not.