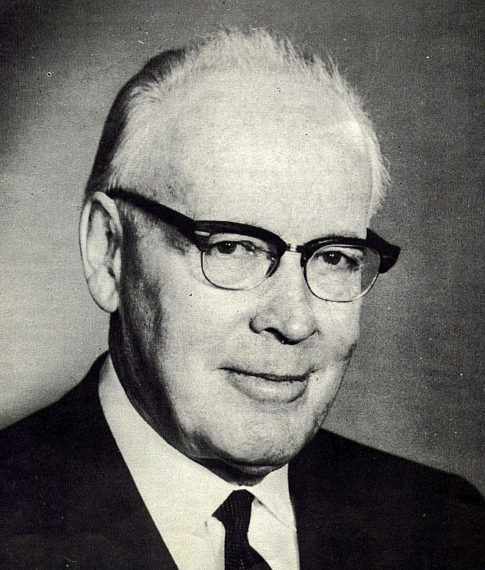 McPhee concluded his nine years of work in Beamsville in 1945, and moved to Toronto, to serve the Bayview Ave. Church of Christ. His home address was 18 Banff Rd. He spoke often on the radio station, CKEY. He remained in that work for three years, returning to Jordan in 1948. “My three years in Toronto have not been fruitful.” He had to sell his home in Beamsville to go to Toronto, leaving him short, $2,500. (His daughter, Rosalie, age 16, spent a year at the David Lipscomb College high school during this time.)

GLCC opened in the fall of 1952, enrollment 14. By the third year, 1954, enrollment had grown to 53. However, in October, 1954, the announcement came that McPhee would leave his post as president. The Nov. issue of the Gospel Herald announced, C. G. McPhee “to preach full-time.” No explanation was, or has been, given re this decision.

Gordon, while president of GLCC, returned to Nova Scotia, in 1953. This was the first time since leaving in 1915 that he had returned to his birth place, having been away 38 years. In Truro, he visited his brother, Henry and wife.

McPhee was preaching for the St. Catharines Raymond St. congregation in 1955 when the addition of Sunday school rooms was begun. This involved the raising of the building and placing the classrooms in the lower area.

In about 1955, C. G. began preaching from small one- page, typed outlines. (No evidence has been found of his sermon notes practice, during 1920-1955, following his hand written, longhand, work book sermons, used up to 1920.) These later sermon notes were on 7 ¾” X 5” pages, punched for a small three-ringed binder. The sermon outlines are type-written, using black/red typewriter ribbons so that he could highlight or underline in red, the special emphases of the lesson. The outlines typically contain: title and Scripture text, (usually one verse), with usually three main points. On these pages, C. G. would note the time and place of their delivery. The McPhee files include 260 sermon outlines, with 453 times preached (and where) noted. While most sermons were preached only one or two times, C. G. did have his favourites: e.g. “Rightly Dividing the Word,” eight times; “Revelation,” eleven times; “Namaan,” twelve times; “Has Christ Failed?” 16 times; and “The Great Salvation,” 29 times! The city where C. G Mcphee preached the greatest number of times was St. Catharines: Raymond and Beecher, 70 sermons; Ontario Street, 69, for a total of 139. (Strangely, no reports of lessons delivered at Niagara Street were found.)

In 1956, C. G. went to Nova Scotia, where he preached for three Sundays, beginning Sept. 16: “The church has revived at Mill Village where I did some preaching.” Also, at Nine Mile River, he went “to stir up some interest, where I preached my first sermon.” And then to Halifax, where he began Oct. 7, 1956, for a dozen lessons and radio sermons. Later in 1956, McPhee visited the Manitoulin Island, and preached at Ice Lake, Nov. 18, and Little Current, Nov. 14.

There are a few funeral records in the files: the records do not include a complete account of the many times he was called to bring solace to family, friends, and strangers. (In October 2, 1958, McPhee conducted the funeral service for my grandfather, William Patterson,)

In late 1960, while McPhee was conducting the meetings at Meaford, he phoned home to announce that the Raymond and Beecher and Niagara and Manning congregations would join forces. On Dec. 4, 1960, the Niagara and Manning members moved “in a body.” The merged church totaled 150 members. By April, 1961, attendance averaged 172, and they were “looking for a suitable lot” for a new church building. C. G. McPhee had now been with the Raymond and Beecher congregation since the fall of 1954.

He recovered and preached for another 17 years.

Gordon and Grace celebrated their 40th wedding anniversary, June 16, 1962, inviting their friends to their home, afternoon and evening, at 4 Fawell Ave. in St Catharines.

During the summer, 1962, two acres were purchased on Ontario St. N, in St. Catharines, for a new church building. On October 12, the digging of the basement was begun. Members from the congregation directed the construction: Gordon Stewart, Loney Wallace, Jim Allcock. The building was designed for a 350 capacity; to cost $90,000,

On May 29, 1963, the Raymond and Beecher building closed, and on June 23, the Ontario St. building was opened.

During 1964, McPhee held a meeting at Ice Lake, Manitoulin, May 3-16, giving ten lessons. McPhee preached regularly over the radio from the mid-1940s: St. Catharines, CKTB; Toronto, CKEY; Owen Sound, CFOS. He was the second preacher, after W. F. Cox, to preach over the radio for Churches of Christ in Ontario.

In April, 1966, the Ontario St. elders made the decision that Charles Gordon McPhee should retire from his full-time responsibilities as preacher with the Ontario Street congregation. They offered to provide him a pension of $200 a month.

In April 16, 1967, Gordon McPhee reported, “Last day of regular work, four years, one month,” i.e. with the Ontario St., St. Catharines congregation. However, he kept on preaching! His records for the rest of that year (1967) list 24 sermons preached in eleven churches! Then for the next twelve years, this record exists: an average of seven congregations a year visited, with an average of 58 sermons per year preached.

During the twelve years of C. G. McPhee’s “retirement,” he preached an average of 77 times a year, to an average of seven different congregations per year.

1970 was a special year for C. G. McPhee. A celebration of his life and ministry was held May 22, at Great Lakes Christian College in Beamsville, attended by 275 people. The gathering was reported in the Gospel Herald, Aug. 1970, issue, p. 12. It was remembered when McPhee was the only full-time evangelist for the Churches of Christ in Ontario. The next month, a colleague of McPhee’s, Walter Dale, wrote a tribute to McPhee, entitled “Well Done,” tracing McPhee’s fifty-five years ministry in Canada (Gospel Herald, Sept. 30, 1970).

Charles Gordon McPhee at the end of his life, said: “My whole heart has been involved in preaching the Gospel. I believe the Gospel is the power of God. Always have I felt that it is my responsibility to preach the word of God. My responsibility is to the Lord and I pray that I may never fail him.”

“For most of his life he has been a mainstay of the work among Churches of Christ in Canada, mostly in Ontario; but he also served in Carman, Manitoba, and for a few years in the United States in his early years. He is known and loved by literally thousands.”

Appreciation is expressed: to Murray Hibbard and the board of the Canadian Churches of Christ Historical Society for making the McPhee files available for this study; to Paul Dale for sharing his repeated researches in the life and ministry of C. G. McPhee; to Ralph Tallman for sharing his 1977 taped interview with C. G. McPhee, and for arranging with Sandy McBay for its recent transcription, with a huge applause for Sandy’s work in her careful transcription of the tape; to my son, Mark (Georgia) for guiding me through the intricacies of Mac computing; to Dave Knutson, editor of the Gospel Herald (online), for his helpfulness in bringing this study to the GH readership.

Finally, the unnamed person who shared the unidentified picture at the beginning of this study, was Dave Carruthers, Thorold, Ontario.