THE GREAT PLAN OF GOD 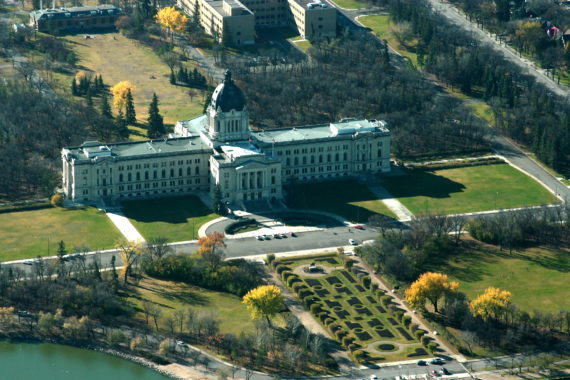 About 100 years ago, three of Canada’s prairie provinces fell into a competition to build the biggest and the best legislature building. Alberta had only been a province for two years before they started laying their plans in 1907, completing their building in Edmonton in 1913. Manitoba, not to be left behind, finished theirs in 1919 in Winnipeg. But it was Saskatchewan that won the competition with their huge structure, opened in 1912 in Regina, and judged the most beautiful. All three legislatures are carefully designed, decorated with polished stone, beautiful wood, graced with big rotundas overhead, grand staircases below, and lots of monuments. Years of planning went into their design and construction, with architects and builders brought in from as far away as Montreal.

In a similar way, God laid His plans to save and bless man. One New Testament writer called it, “An administration suitable to the fullness of the times.” (Eph.1:10) We see hints of it in the very first chapters of Genesis, expanding to the promises made to Abraham and later passed down to his son and grandson. We see promises made to Israel, the nation that would eventually produce the Messiah. Predictions and plans bubble up in various sections of the Old Testament as God prepared His people for coming salvation. God’s plan to rescue man has an amazing depth and wisdom about it. It contains nothing superficial or shallow. It involved the best people God ever produced.

God took His plan and wove it into history and eventually opened it up to everybody who desires to investigate, and it infuses our lives and work with vital importance. In Titus 1:1-4, Paul told the evangelist in Crete of four important effects of God’s plan upon each of us.

1. It takes ordinary people and makes determined servants out of them. In verses 1-2 Saul no longer served himself but became an apostle and bond-servant of Christ. On the road to Damascus, God put a stop to Saul’s destructive campaign against the church. He had plans for this man. Isolated in a room in Damascus, blinded and shaken, refusing to eat or drink anything for three days, think what must have gone through his mind. As a Jew he had been aware of God’s plan throughout history, but now he realized it all culminated in Jesus Christ. Everything changed from that moment on. He became a determined servant.

In these two verses of Titus he tells us what he served for.

First, he served for the faith of those chosen of God (v1). That is, to help Christians grow and mature, for they had been chosen; they were God’s people. Paul took an interest in every Christian he met. He nurtured them.

Second, he served for the knowledge of the truth which is according to godliness. He advanced in it himself and helped others to learn, grow, and be changed. This knowledge he’s talking produces godly ways within us – and Paul lived to see that in others and in himself.

Third, he served in the hope of eternal life (v2). His eternal reward was on his mind. He desired it and expected it. It gave him comfort and motivation. He points out that God cannot lie about the great things coming. He won’t fool or shortchange us about eternity in heaven; He’s not playing games. We can count on his promises. Paul served with that in mind, and it should motivate us too. He became a grateful, determined servant for the faith, for the truth, and for eternal life. These things governed Paul for the rest of his life and made him a servant. They can do the same for us.

Right here in these verses we encounter the historical character of God’s arrangements for eternal life. The great plan of God involved promises made long ages ago, a phrase that means before times eternal. Isn’t it remarkable that before God created man, He already knew man was going to fail? This was inevitable because God gives us the ability to make our own decisions according to free will, and He knew we would decide to do the wrong thing much of the time. So, His eternal plans for man involved a way to save us from our sins and failures. It wasn’t a last-minute decision, like a software patch to correct a sudden glitch within us. He had the plan ready before he created us.

All through the history of man God administered his plan, unfolding it throughout the centuries. Paul masterfully described it in Ephesians 1:10 (please read). God administered his plan, bringing it to its peak when the times were suitable, meaning the first century when He sent Jesus here who “summed up all things” about salvation. And now it’s no longer a mystery, for we can see God’s great plan in His Son. 1 Tim.2:6 says, “Christ Jesus, who gave Himself as a ransom for all, the testimony borne at the proper time.” It’s like that capitol building in Regina as it was being constructed. People couldn’t see what it was going to be like until it was finally completed, and everyone could marvel at it. At the proper time God manifested the completion of His plan. He had a moment in history chosen when he would reveal it for all to see. “But when the fullness of time came, God sent forth His son.” (Galatians 4:4) That is, so that His son could pay the price and complete it. God’s plan takes men and women and makes servants out of them. But there’s more.

2. It helps us make sense out of life (Titus 1:3). I think we’d all agree that life can be puzzling and hard at times. The apostle Paul sorted through difficult things as he waited in Damascus to be told his next steps. Ananias arrived and healed him of his blindness (Acts 9). That blindness wasn’t just physical; he’d been blind to God’s plans in Jesus for many years. Ananias gave him the final pieces of the plan, and it all became clear. He needed a few years to get things sorted out; most of us do. But then he was ready to serve.

Later in life, Paul suffered in jail many times, the final one being as he wrote 2 Timothy. Brethren all over the ancient brotherhood worried about him; some were ashamed of him, presumably because here one of their preachers was in jail. It was a confusing, stressful time for Paul.

But the apostle revealed his thinking about these things in 2 Tim.1:8-10 (please read). He told them not to worry or be ashamed, for through Jesus God’s grace and purpose is granted. All of God’s eternal planning and management of history is fulfilled in the appearing of the savior. Jesus abolished death (disarmed the hopelessness and finality of it). He brought life and immortality to light (that is, life’s true meaning). It now involves immortality; we’ll live on. The graveyard is not the end of it! There are great things coming. Paul saw the big picture. It helped him be unafraid of jail, suffering and death. We, too, can make sense out of our lives as we align them with God’s great plan.

3. God’s plan grants us the most important work in the world. (verse 3) The fact is, it was not only Jesus that was manifested at the proper time, it was also His word which Paul describes as the proclamation. The story of Jesus as a message, a proclamation, was finally clear. It’s a powerful piece of information. Eternal life is actually bound up in the message as life is in a seed. The proclamation of the message of Christ has the potential to give people eternal life, hope, joy purpose, and quality of life.

Paul was entrusted with this proclamation. He held it in trust, just like we would care for and manage the property and equipment of our employer. The apostle didn’t keep it to himself, he shared it across two continents according to God’s command. We too are entrusted with this work. There are lots of important things going on the world right now: governments are fighting Covid-19 and trying to keep our economy going, and everyone is worried about our deteriorating physical world. But nothing is more important than sharing the word. Teens can share it with teens; those working can share it with co-workers; the elderly can share it with elderly friends. Others who lived before us passed the message on, according to God’s plan. He is counting on us to keep it going. He has given us the most important work in the world.

4. It blesses us with a unique bond within the family of Christ. (verse 4) God’s overall plan allowed Paul to think of Titus as a son. Their common faith produced this relationship. Outside of Christ they probably never would have met, and if they had they wouldn’t have developed a brotherly relationship, for Paul was Jewish and Titus was a Gentile. Likewise, we don’t’ want to go through life alone. We need others who share the same great purpose which we have in Christ. We share our lives with each other, and give each other encouragement, strength, joy, brotherhood, and a sense of belonging.

God is pleased to give us these deeply valuable effects arising out of his eternal purposes. You might ask, “Where has God and his plan been in my life?” Matt.7:13-14 reveals it’s been running beside you all along! The narrow road and small gate have always been there. Maybe you’ve been travelling on the broad road everybody else travels on, which doesn’t lead to life. Like many others, the apostle Paul finally looked and saw the narrow road and began to follow it. It’s a choice we all must make. Have you?