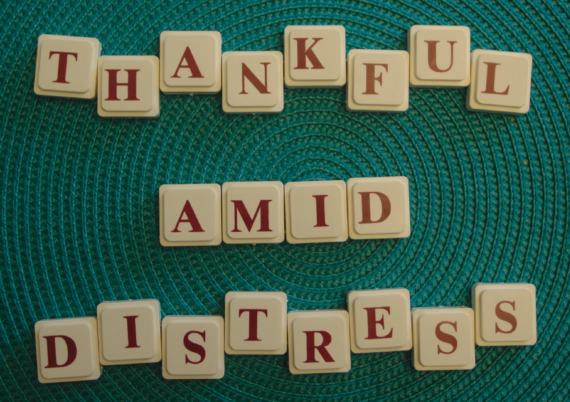 In the first twelve verses of this chapter we find a description of the depths of evil into which humans sometimes fall. Those who “refuse to love the truth” but instead take “pleasure in unrighteousness” will be sent a strong delusion and will believe a lie (11–12).

“But we ought always to give thanks to God for you, brothers beloved by the Lord, because God chose you as the firstfruits to be saved, through sanctification by the Spirit and belief in the truth” (2 Thessalonians 2:13).

Too often we try to force thankfulness. We try by willpower to feel thankful because we know that we are commanded to be thankful. One suspects that this may have always been difficult. It is certainly difficult today. We are continually bombarded with messages that make it hard to feel thankful.

Advertisers are behind much of this. People who are satisfied with what they have are not going to buy what the merchant wants to sell. So, the first objective of advertising is to make people feel dissatisfied. We are constantly being told that we “need” and “deserve” this or that new product. It is no wonder that we find it difficult to be thankful.

I have never been a salesman. I think that I would be terrible at the job. If I were selling cars, I would constantly be pointing out reasons why people should be satisfied with the car they already have. If I were selling appliances, I would be questioning, “What is wrong with your old appliances?” That is not the way to sell things, but I think it is the attitude that Christians ought to have.

I have never considered running for public office. I would make a terrible politician. Instead of telling people all the things I was going to give them, I would be telling them that they really do not need the government all that much. I would be emphasising that their families and their churches could do most of the things that the government claims to do – and that

their families and churches could do more personally and effectively. I would really offend them when I told them what the main job of government is, according to the New Testament (Romans 13:3-4). Even in the most conservative of areas I would never be elected. People want to demand more and more from their governments.

Amid all the materialism and dissatisfaction around us, we cannot be thankful by sheer willpower.

We must instead focus on what God has already done for us and given to us.

Thankful for Being Chosen
Our thankfulness is possible primarily because of God’s actions. It is he who chose them (“because God chose you” 13b).
We think of ourselves as having chosen God, rather than of him choosing us. We sing and say in various forms, “I have decided to follow Jesus.” Much less frequently do we say, “I can’t believe that he selected me.” But from a biblical perspective, his selection is emphasized far more. Afraid of becoming Calvinistic, we avoid passages like Romans nine and Ephesians one. We need to speak more and meditate more on his choosing us (Romans 8:29; Ephesians 1:4–5; 2 Timothy1:9). We need to remind ourselves that “we love because he first loved us” (1 John 4:19).

Thankful that We Believe
This thankfulness is possible because his grace has enabled them to believe. It seems very odd to us that sanctification is put before belief here, “God chose you as the firstfruits to be saved, through sanctification by the Spirit and belief in the truth” (13). But if we remember what he has just been saying about what happens to those who refuse to love the truth but instead love unrighteousness, it makes more sense. Those in that rebellious state of mind lose the ability to believe. And we have all been to some extent in that state of mind. We may never have rejected good and embraced evil as clearly as certain others around us. But we have been guilty of it.

We must thank God that he did not give up on us; that he granted to us the opportunity to experience a degree of sanctification that allowed us to believe (Acts 11:18; cf Mark 1:15; Acts 19:4).

Thankfulness is expressed by standing firm, holding to the apostolic teaching. “So then, brothers, stand firm and hold to the traditions that you were taught by us, either by our spoken word or by our letter” (15).

And we stand firm not by our own strength, but by the comfort, hope and grace he grants.

“Now may our Lord Jesus Christ himself, and God our Father, who loved us and gave us eternal comfort and good hope through grace, comfort your hearts and establish them in every good work and word” (16–17).

The new believers at Thessalonica faced a distressing prospect. There were many who refused to love the truth. Because of their attitude, God was going to send them a delusion. There was going to be a terrible man of sin, a veritable personification of evil.

These young Christians were called upon to stand firm in that distressing time. By looking to and giving thanks for what the Lord had done, in choosing them – in sanctifying them, in enabling them to believe – they would be able to stand.

We also live in a distressing time.

The pandemic has taken a terrible toll on the church. Many government leaders have disappointed us in their handling of this. Some have even shown open hostility to the church, allowing immoral businesses greater freedom than they allowed to churches. Even many who we thought were Christians returned to all their normal activities except to worship.

As I write this, the prospect of a major war hangs over the world. Putin’s army has invaded Ukraine. It seems that 1940 is replaying before our eyes. We fear that, if a large country is allowed to swallow up their neighbour, Taiwan will be next, and then….

I live next to a runway that was built so that British troops could be sent to defend this tiny country in case it was attacked by either of the neighbouring countries. Watching events in Ukraine, we now believe that no troop transports will come. If either of the neighbouring countries (both of which are aligned with Russia and China) attack, Eswatini will not be helped.

It is a distressing time. What should we do?

We should give thanks. The Lord has chosen us, sanctified us, and granted us faith (13).

We should stand firm holding to the apostolic teaching (15).

We should continue, by means of his strength, to engage in whatever good work we can find to do, or good word we find to speak (16–17).