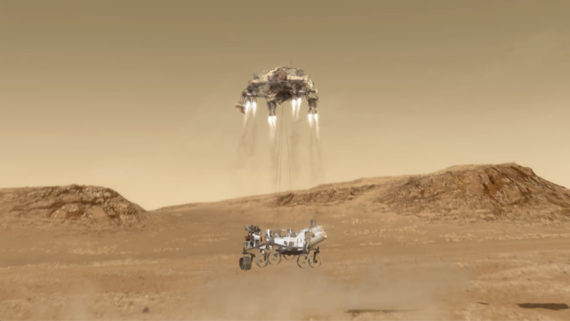 At 7:50 AM, EST July 30, 2020, a spacecraft carrying the ‘Perseverance rover’ and its ‘Ingenuity helicopter’ lifted off from Cape Canaveral Florida. It soon cleared the ‘space junk’ in close earth orbit and reported that all was well. NASA’s Jet Propulsion Laboratory confirmed that they had received the spacecraft’s signal, explaining:

“This signifies that JPL’s deep space network has locked on to the spacecraft, which is on its journey to Mars,” said Omar Baez, launch manager at NASA’s Launch Services Program1.

Missions to Mars are timed to take place when the earth and Mars are on the same side of the sun, greatly reducing the distance needing to be travelled. As planned, the rover landed right on schedule some seven months later on February 18, 2021.

Those who planned the mission used their minds to apply complex mathematical calculations to known scientific laws to bring about this outcome. They depended on their ability plan, engaged in communication to work collaboratively, applied their minds to the task, put the principles of mathematics to work and then extended these, by applying them to the realm of everything outside of the mind. While the complexity of this is somewhat staggering, it seems that no one seriously stopped to wonder, how is all of this possible?

That people are able to do this is, is apparently not in itself the object of wonder that it rightfully should be. Planners are instead focused is on the prize – to explore the ‘red planet’ with the tantalising possibility that life may be found somewhere other than on earth. Should life be found elsewhere, its existence would of course be no more self-explanatory than is life on earth.

The scriptures do express wonder at the things that we take for granted, consistently giving glory to God. God called the heavens and the earth into being out of nothing so that they appeared at his command. They bear the marks of intelligent thought and the careful planning of one whose purposes bookend the cosmos. Made in his image, we are able to plan and to think, and then not surprisingly apply our thinking to the practical realms of physics and chemistry. Our lack of surprise at this…flows from our Christian conviction that the same God who made our minds also made the world outside of our minds.

Writing to Jewish Christians who had been scattered for their faith, James the brother of Jesus said this about God:

“Every good thing given and every perfect gift is from above, coming down from the Father of lights, with whom there is no variation or shifting shadow”. (Jas 1:17)

God is the ‘father of lights’. He is the ‘eternal one’ behind and above all that is, for now, unvarying and predictable. The heavens declare the glory of God by reflecting to some degree his unchangeable nature. He is the ultimate reason for our confidence in rational thought and it’s application to the world. We purpose and plan against the backdrop of sameness and predictability guaranteed by almighty God.

After the flood, Noah made an offering to God, it was the Lord himself who said:

…“I will never again curse the ground on account of man, for the intent of man’s heart is evil from his youth; and I will never again to destroy every living thing, as I have done. While the earth remains, seed-time and harvest, cold and heat, summer and winter, and day and night shall not cease.” Gen. 8:21-22

Our collective achievements take place in the shadow of the almighty. If the rover has landed, it has landed because of Him. It is not that God needs to explore Mars, but that God permits us to do so in the hope that we will find Him – in the vastness of space – though he has declared himself to us from long ago.

It is wonderful to discover the God who is there. But even more wonderful to find Him at work within us. The ‘father of lights’ has exercised his will so that you and I, having been begotten by the word of truth are now the first-fruits of his new creation in Christ Jesus. His love for us is measured by the gift of his Son who guarantees our salvation at his return.

PrevPreviousCome, Let us Worship and Bow Down
NextThe Choice to Please GodNext