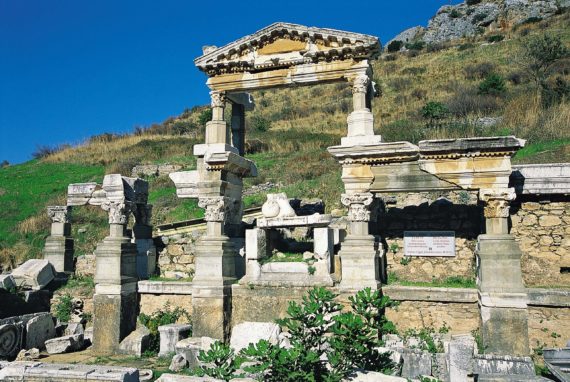 John the Apostle intrigues me!

John was little more than a teen-ager when he became a disciple of Jesus, becoming one of the first to do so (cf. John 1:35–42). John’s mother was Salome, a sister to Mary; making John a cousin to Jesus.

John’s father was Zebedee of Bethsaida, which was located at the north end of the Sea of Galilee. Zebedee had a successful fishing business and his sons James and John worked alongside of him. They combined forces with another family of fishermen, the sons of John, Andrew and Simon, also known as Peter. Jesus invited all four of these young men to become “fishers of men.”

What emerges in the Gospels is an early picture of John’s independent assertiveness. Thus, we are not surprised to learn that his nickname, along with his brother, James, was “Boanerges,” “sons of thunder.”

John was chosen, along with his brother James, to be an apostle of Christ. It is believed that he was the youngest of the apostles. John, along with his brother James, and Peter, became especially close to Jesus during his earthly ministry. These three alone witnessed Jesus’ raising of Jairus’ daughter; they were present at Jesus’ transfiguration. It was John and Peter whom Jesus sent to prepare for the last supper (Luke 22:8). These three were alone with Jesus, sharing his agony at Gethsemane.

Of the twelve apostles, John was the only one to remain at the cross to witness Jesus’ death. It was at the foot of the cross that John received Jesus’ dying charge to care for his mother, Mary, (Jn. 19:23-27). And John was the first one of the apostles to see the empty tomb, outdistancing Peter in their race to get there.

John bore the shock and sadness of his brother’s martyrdom at the hands of Herod who had James executed with a sword, Acts 12:2.

It is believed that John was the author of the Gospel that bears his name, along with three letters of the New Testament, and the Revelation. John identifies himself six times in his Gospel as “the disciple whom Jesus loves” as that work draws to a close. These are found at the Last Supper, 13:23; at the cross, 19:26; at the empty tomb, 20:2; at the Sea of Galilee, 21:2; at Jesus’ prediction of John’s natural death, 21:20, and in identifying this one as the author of the Gospel, 21:24.

Tradition tells us that John departed Palestine taking Mary with him to Ephesus, shortly after the Roman army’s destruction of the temple in AD 70. If the tradition is true, (and a tomb in Mary’s name exists there in the ancient ruins), Mary would have been in her mid to late 80s when she passed.

While the greater part of the New Testament was written in mid-first century, John’s writings were composed in the late decades of that century. By this time Christianity had spread throughout the Roman empire, and its teachings were being called into question by heresies. John challenged these false teachings and their advocates. This shift in emphasis is evident in the contrast between John’s Gospel and the Synoptics. Only four events recorded in the earlier Gospels are repeated in John.

Turning to the Gospel of John, we note that it is little more than half finished when in chapter 13 Jesus gathers with his disciples for the Last Supper. John surprises us when he leaves out Christ’s institution of the Lord’s Supper1. Instead, he alone tells the story of how Jesus dressed himself as a servant and washed the feet of his own disciples. This was unthinkable and unacceptable to Peter who declared “You are not going to wash my feet!”. Yet that is what Jesus proceeded to do. On his way to the cross, Jesus humbled himself. He knelt and served before he suffered and died. This is what the Lord’s Supper is all about and the foundation of His new commandment.

We also note that John chapters 13–17, sum up Jesus’ final instructions to his apostles. These are not by extension applicable to all disciples, unless it is clear that Jesus is making a general declaration. For example, “But the Helper, Holy Spirit, whom the Father will send in my name, will teach you all things and bring to your remembrance all that I have said to you” (14:26)—was the special gift to the apostles. John is, of course, here affirming the source, the accuracy, and the authority for this his Gospel record.

John was prominent in the life of the early church. According to the record in Acts, he is the second one named in the list of the apostles gathered in the upper room in Jerusalem after Jesus’ departure to heaven (Acts 1:13). It was John and Peter, who healed the lame man at the temple. And they together subsequently appeared before the Jewish authorities (Acts 3:1-11; 4:1–22). Peter and John were chosen by the Twelve to expedite the conversion of the Samaritans (Acts 8:14–17). And Paul cites John as one of the pillars of the church in his letter to the Galatians (Gal. 2:9).

John spent the last quarter of his life in Ephesus, surrounded by Gentiles. This was the largest city next to Rome at the time! Here he served as an “elder”. His self reference in II and III John is from the “Elder.” And while John doesn’t name himself in his longer letter, he repeatedly refers to those to whom he is writing as “dear friends”—six times, and as “little children”—nine times. He knew his readers and they knew him! He would have known and been known by the “Seven churches of Asia” addressed by Jesus in the Revelation. It is during this period that he was imprisoned for a time on the nearby island of Patmos. While there, he experienced being with angels while he witnessed the great heavenly conflict and the supreme victory of Christ, that he records in the Revelation! At the end of his life he was spared the martyrs death shared by his eleven fellow apostles.

John is truly an intriguing person!

But what is the point of this recitation? To be grateful and moved by God’s gift of John the Apostle. He was the prime Witness of the First Century!

What is our point to day? High gratitude for God’s gift, John the witness of the First Century!

John identifies three settings for Jesus with his apostles on the eve of his crucifixion:

(3) and Jesus’ “high priestly prayer”—Chapter 17 (possible prayed in the shadow of the temple, for “When Jesus had spoken these words, he went out with his disciples across the Kidron Valley, where there was a garden where he and his disciples entered,” 18:1).

1. With reference to the Lord’s Supper, see chapter six, where John records the Feeding of the Five Thousand, followed by Jesus’ teaching to “eat my body, drink my blood,”. This is a deep discussion of the meaning of the Lord’s Supper.