Jesus and Simon of Cyrene 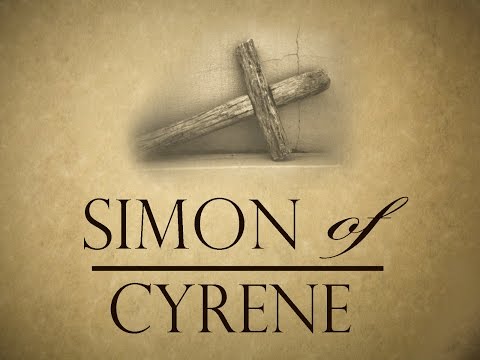 The torture of the cross began with the condemned man carrying the crossbeam for his execution, to the killing grounds. It was a humiliating start to a drawn out and excruciating death. This is what we find Jesus doing in John 19:17. Flogged and beaten, there came a point when he could not go on and at which the soldiers “drafted” Simon of Cyrene to carry the cross for Him. The fact that this was a normal and legal procedure tells us how badly men suffered before being nailed to the cross (See Matt. 5:41.)

“As they led Jesus away, a man named Simon, who was from Cyrene, happened to be coming in from the countryside. The soldiers seized him and put the cross on him and made him carry it behind Jesus.” (Luke 23:26 NLT)

Considering all that Jesus had endured since His arrest in Gethsemane, it is not difficult to imagine Him falling under the load. But there was something else involved: carrying the cross was a sign of guilt, and our Lord was not guilty!

Thousands of Jews came to Jerusalem from other nations to celebrate the feasts (Acts 2:5-11), and Simon was among them. He had travelled more than eight hundred miles from Cyrene in northern Africa, (modern day Libya) to celebrate Passover.

But why did the Gospel writers include this fact?

It might have been that this same Simon, would later become well-known in the early church. The mere mention of his name added further historical evidence.

We have good reason to believe that Simon was converted because of this encounter with Jesus. Mark identified him as “the father of Alexander and Rufus” (Mark 15:21), two men that Mark assumed his Roman readers would know. A Christian named Rufus was greeted by Paul in Romans 16:13, and it is possible that he was the son of Simon of Cyrene. Apparently Simon and his two sons did become well-known Christians and were held in honour in the church.

But perhaps there were more reasons than just this for Luke’s inclusion of Simon.

Let me make some suggestions.

Whether or not Luke intended one or all of these suggestions, what we do know is this:

Let us comfort ourselves with the thought that in our case and in Simon’s, the cross that we are called to carry belongs to Jesus. Jesus calls us to faith in him and to godly living. It is for these that we suffer as he did. How delightful for us to carry His cross, in His name and for His glory. May our love for him and thankfulness to him grow from day to day.

PrevPreviousAligned with the Will of God
NextWhat Does “Blessed” Really Mean?Next