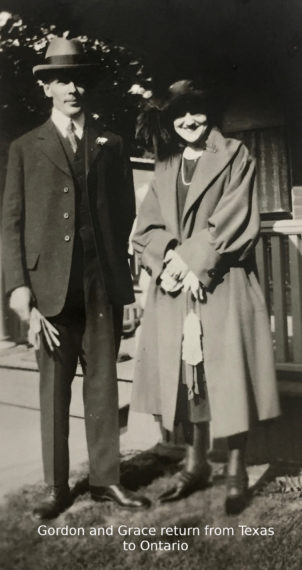 (1) In 1930, G. G. McPhee was invited to return to Carman, Manitoba. The congregation there looked to his leadership to overcome their troubled state that had afflicted them since the last years of the second term of the Carman Bible School, 1921-1927. The school had been reactivated at the urging of H. A. Rogers who saw the value of the first session, from 1899-1902, and the need for Christian education in western Canada. He encouraged H. L. Richardson to take on the task of directing the school. Howard Lipscomb Richardson had grown up in Meaford, where his father was an elder. (The wife of H. L. Richardson was the widowed Goldie Lawson, sister to Grace (Tallman) McPhee.) Richardson had both studied and taught at Beamsville Bible School. Then in 1918, Richardson opened a commercial school in Little Current, Manitoulin Island. This was a Bible school in disguise, for all students were required to take a class in Bible along with their commercial studies. The school was described as a success. The Carman school of the twenties attracted such students as Alonzo Rogers, Wilford Orr, J. C. Bailey, Bethel Vine, and George Johnson. However, Richardson was drawn to the teachings and practices of the Disciples of Christ in western Canada. He left Carman and the Carman school in November, 1926, to join the Disciples movement. The school closed after one more year. But the congregation in Carman remained troubled and divided. They then turned to C. G. McPhee.

McPhee related, (in a 1977 interview), “I spent two months, and got them back together again. They have remained together since, even though reduced.”

His picture and eulogy appeared in The Christian Monthly Review, written by C. G. McPhee.”

Gordon wrote a moving eulogy that was published the next month in the Christian Monthly Review: “I first met Brother Tallman in 1909. He came to West Gore, Nova Scotia, and joined his brother Ora H. Tallman in the opening of the Maritime Bible and Literary College. For six years he taught and preached in his earnest and characteristic manner, where he accomplished much good. I for one can say that those years of study and association will always be cherished. There my character was shaped. What I am today, I owe in a large degree to the sacrifice, patience, and exhortation of Brother Tallman and his co-laborers, who now mourn their loss.”

C. G. said of the loss of his son’ “It was the greatest blow I have ever suffered. He was a very bright, intelligent boy.” Gordon remembered Ralph saying, “I am going to preach, sing, play golf, and hunt for bears!” (Years later, he wrote in a sermon note, about a Biblical sorrowful loss, and he inserted “…and Ralph.”)

Charles Wesley Petch, preaching at Charlton Station in northern Ontario, was invited to mediate between the two congregations and McPhee. In 1932, word of reconciliation came. C. G. wrote a letter (Sept 30, 1932) to O. H. Tallman, Cookeville, TN., reporting the development: “Troubles over.” He noted that the division was because of personal matters rather than doctrinal. A leading member of the Niagara St. congregation, wrote a letter of apology; a similar statement was signed by a number at Raymond Street, and peace was secured.

Reported in the Oct. 1932, issue of The Bible Student, “The Churches in St. Catharines have arranged to have a Fall meeting on Oct.16. Both churches in the city are co-operating.”

(3) Then in May, 1936, C. G. McPhee returned to work with the Beamsville congregation. (This began a nine year stay with the brethren in that town. It was in the Depression. McPhee took another drop in his support, to $18.00 per week. Yet, he was able to purchase the house, of the “Gibson Estate,” on King St., next to the Knox United Church; “offer of purchase, $950.”) The congregation he served was the “Brick” group. There were two congregations in Beamsville at the time, both meeting on Queen St., one-half block apart. They were not in fellowship, and had not been for 26 years, cf. the 1910 split. McPhee had experienced the devastation this had caused, both in Beamsville and in the province. He stated, “The effect has been felt from one end of Canada to the other.”

The “June Meeting” was scheduled that year for Beamsville, June 20, 1938. Claude Witty, of Detroit, was to address the gathering. He would remain a week or so, working on the reunification of the brethren. In the meantime, McPhee had prepared a statement of reconciliation, to which he had secured the signatures of all the members of the “Brick” congregation. He presented this document to the “Block” group (also named “Cement,” and by now, the “Frame,” as the congregation had sold their building and were meeting in the frame building next door). McPhee and Witty had worked two weeks, securing signatures of all the “Block” group except two or three, and Witty went home. Then on Sunday evening, June 28, all but two or three, “the group moved to worship with their brethren up the street!” The healing took “a great deal of work and prayer by Godly men, the patience and labour of brethren, and the special efforts of Claude Witty,” according to McPhee. Later, McPhee admitted that he made little headway in the community during his nine-year stint at Beamsville. “The damage had been done.”

Later that summer, July 1, 1938, Gordon was present in Meaford to remember the congregation’s 90 years, 1848-1938. Alex Stewart, of Toronto, spoke in the morning, W. F. Cox of Hamilton, in the afternoon, and C. G.McPhee, in the evening This was followed by a three-week meeting by McPhee.

These nine years in Beamsville found him at his peak of energy. He would preach in the morning at Beamsville, go to St. Catharines and preach a radio sermon at the CKTB station in the early afternoon, go in the later afternoon to either the 30 Mountain gathering (west of Beamsville), or to Rosedene (east of Beamville,) both on the Escarpment, preach at the evening service at Beamsville, and if Tintern had an 8:30 p.m. service, sometimes preach there too! And he reported that this schedule did not phase him!

Charles Gordon G. McPhee had an important role in the formation and early years of both Omagh Bible School and Great Lakes Christian College. That McPhee was both energized and prepared for these roles in his formative years as a student at the Maritime Bible and Literary College, West Gore, Nova Scotia, 1909-1915, goes without saying.

McPhee was influential in shaping the terms of Omagh’s Incorporation in 1943. Through his insistence, board members were to be members of Churches of Christ, recognizing that church music was a cappella only. The debate lasted past midnight.

In 1945, the first summer that Omagh Bible School used the ten-acre facility next to the 16 Mile Creek for its activities, McPhee directed the program. The property had been gifted to OBS by the Johnstone family, cf. William B. Johnstone, who had begun the activities in 1936 that led to this accomplishment. The campus had been completed under the direction of Jardine McKerlie, Toronto. The boys’ dormitory, built in 1943, and located in the field opposite the farm house, had been moved to its new location and converted into the dining hall/activities center; the kitchen, dormitories, and “bunkies” were added. The staff-house, McKerlie Hall, was added in 1947. McPhee, in 1945, was 53 years old. He would serve in the post of “principal” for fifteen summers.

Dr. George S. Benson, president of Harding College, Searcy, Ark., visited Ontario, March, 1947. He toured the Omagh campus, with the OBS board, in snow! Then, he held meetings on Saturday and Sunday in Toronto. He noted: “30 Ontario young people are presently in American Christian colleges. How do we insure that Canadians return to Canada for evangelism?” On Monday, Benson was the guest speaker at the Omagh Bible School’s annual meeting, held that year in Beamsville, with George M. Johnson, chairman. Benson recommended that OBS become a winter school, a junior college!

What Benson could not see was the Omagh’s students were becoming younger—its special work would be a summer camp, much in keeping with the founder’s vision. In the meantime, and in keeping with Benson’s vision, serious interest in Christian education on the college level in Ontario was stirring in the province. Within three years, 1950, Great Lakes Christian College, to be located in Beamsville, received its Letters Patent.

McPhee serving in Meaford at the time, received two visitors from Beamsville, Carol Tinlin and Hermon Mason. They wanted him to become a director on the board of the new Great Lakes Christian College. McPhee said: “I was willing to do that. I had talked about it and helped some. I think there was something else behind it all, why they came up there. I came down to the first Directors meeting and was appointed the President of the school. Had I known what was going to take place, I might not have appeared on the scene. But nevertheless, we started—with nothing. It was a long, hard job to get things started. It started with a number of teachers, and went forward. I left it in the fall of 1954 and moved to St. Catharines.”

While serving as president of the yet to be opened Great Lakes Christian College, McPhee and his wife, Grace, left on his first fund raising trip, in early 1952. At this time McPhee was still “located” at Meaford and he had ongoing duties to fulfill before they left: preaching, arrangements for a wedding, pre-recording of radio sermons in Owen Sound, a funeral, plus a couple of trips to Beamsville where preparations for opening were ongoing under Bruce Merritt’s direction. Then on the road: to Birmingham, staying with W. G. Tallman. Meeting at Clawson in the evening, some support. Meeting that night at Birmingham, some support received. On to Toledo, visited members. Drove hard to Indianapolis for overnight. On to St. Louis and through to Oklahoma City. Then on to Tulsa where he spoke to a full house at 15th & Drexal where support and promises were received. Visits next day in the city receiving gifts and promises. Then an all-day trip to Abilene, Texas. At the college (ACC) the next day for the Bible Lectures, where he had opportunity to address briefly a crowd of 1,200. Met a number of students, including “Jeff Ellis.” “Time passed quickly and gave insight into the work and future prospects.” On to Fort Worth and Dallas for several contacts, and then home.

In his 1977 memoirs, C. G. said, “Today you enjoy the services of Great Lakes Christian College. Each one had a contributing part. Some at great sacrifice. But it all grew from the Nashville Bible School. And I will always stand behind of Great Lakes Christian College because of its fruit. It has turned out a lot of teachers, a lot of preachers, a lot of business men, and has been instrumental in helping many of the churches in Ontario.”

For over two decades, McPhee was front and center in Christian education in Ontario!