How Are We Still Standing? 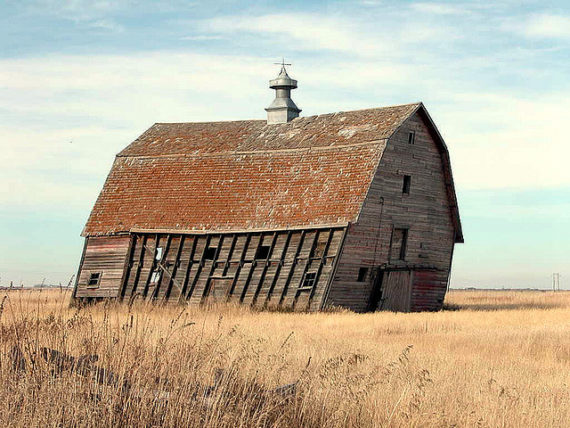 Whenever our family heads out to my mom and sister’s place in Fenwick, the small Niagara town where I grew up, we usually take the backroads as opposed to the highway – it’s more scenic, and much quieter. Bismark is one of the small villages that we pass on our way to Fenwick, and just outside of the village centre is a farm with a very structurally compromised barn on the property. The roof, walls, and upper floor in the centre of the barn have all dropped one level. Each time we pass that farm, I think to myself, “Is that barn still standing?”

Maybe you’ve seen something similar, with a kitchen appliance, or an old lawn mower, or a shed: these things really should have broken or died out long ago, but they’re still working or standing for some reason. It’s puzzling. And that’s something of what we see when we come to the end of the book of Ezra in chapters 9 & 10.

The story of Ezra is a marvel of God’s sovereignty and steadfastness, as he returned busloads of people from exile in Babylon and Persia back to their homeland of Jerusalem. And not only that, but along the way God turned the tables such that, as the Jews began resettling, some of their most hostile opponents were conscripted into subsidizing a number of the Jewish civic and cultic building projects.

As the rebuilding of the Temple neared completion, this sense of wonder in God’s restorative hand culminated in a great worship ceremony at the end of chapter 8, and all seemed well and good. But when you turn the page to chapter 9, the skeletons begin to come out of the closet. The godly priest Ezra, who had only just arrived in Jerusalem shortly before this celebration, was informed by a number of officials that a many of returned exiles who had been back in the land for some time – including not a few religious leaders – had been living in sin by taking wives from the surrounding pagan nations. Having learned this, Ezra broke down and launched into an incredible lament. He tore his clothing, ripped hair out of his head and beard, and fell on his knees before the LORD, weeping, praying, and fasting.

Why such a dramatic response?

This was exactly the kind of intermarriage that had led God to remove the Jews from Jerusalem in the first place. It was like plugging a punctured tire, without removing the nail.

Basically, “Did we spend 70 years in exile to learn nothing? Are we actually this stubborn?”

Resettled Israel didn’t seem to look much different from pre-exiled Israel, and as Ezra prayed, he may have feared that this relapse into sin might send them back into exile once more. Embarrassing to say the least.

At the beginning of chapter 10, as people watched Ezra and heard what he said to God (quite a spectacle) they began to be convicted of their sins. And, by the end of the chapter, their repentance was fully underway.

Returning to Ezra’s prayer in chapter 9, an interesting theme emerges: he acknowledged that he, his people and their ancestors had always been sinful. He confessed that “our iniquities have risen higher than our heads, and our guilt has mounted up to the heavens (vs 6-7) From the days of our ancestors to this day we have been deep in guilt,” and he recognized that this was the reason they had been driven into exile. But as he continued to pray, he arrived at an undeniable observation, admitting – that God had punished them less than they deserved, and had continued to preserve the people in the remnant that returned to Jerusalem from exile. (vs 13)

Israel was like that barn in Bismark: it should already have collapsed. It was living on borrowed time. When will it finally fall?

Ezra saw this about his people: we shouldn’t be here. We have not learned our lessons, we have not grown up, we have never matured, and we do not deserve to be around. He puts it this way in vs. 14:

“The time has passed for God to have already completely destroyed us, without remnant or survivor.”

I remember hearing a summary of this as a response to a Wednesday night Bible study question several years back. The teacher asked our class, “What do you learn about God in the Old Testament?” And someone had answered, that “God was bewilderingly patient.”

Ezra doesn’t ask the question here, but it seems somewhat implicit: “When will it be, O God, that you finally come down on us as we deserve?”

God’s answer arrived some 450 years later, on a hill at Calvary. This is not the answer that we would anticipate. God never came down on his people as they ultimately deserved, because he intended for that punishment to come down on his Son, who did not deserve it. The cross was a demonstration not only of God’s bewildering patience, but also of His unstoppable love. And then, having taken our punishment upon himself, Jesus empowers us to break the cycle of repeated sin.

Like ourselves, the Israel that Ezra knew, continued to sin. Repentance in Ezra’s time (ch 10) was followed one generation later by relapse, so that by the time of Nehemiah, they had once more intermarried with pagans.

Now, in Christ, in the new covenant – God fulfills his promise to give his people a new heart that is soft and pliable. One that is able to receive God’s laws and actually live them out, corporately and consistently. We are aided by his Holy Spirit, who is able to teach, to convict, and to lead us.

This is not to say that the church may not have its own blind spots or weaknesses (flaws, even), but it is to say that – over the course of history – the church as a whole is an effectively different enterprise compared with ancient Israel. The change that God brings about within his people through the blood of Jesus is lasting. His people are given to prayer and fasting, their praise and testimony are on their lips, their money and their hours are given to those who are in need.

In Jesus Christ and by God’s grace, we are not living on borrowed time, like a barn ready to collapse. Our life in Christ is altogether new and is being renewed day by day. We do not have to fear that time is running out, or that God’s wrath is about to come down upon us. Instead, our confidence is in God who loves us and who has saved us through his Son, Jesus Christ.

PrevPreviousFishers of Men or Keepers of the Aquarium?
NextHow Doc Brown Got UpstairsNext