GREAT IS THE MYSTERY OF GODLINESS 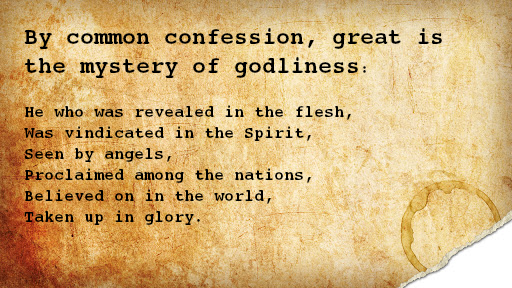 1st Timothy is a letter anticipating a visit. Paul explained,

“I am writing these things to you, hoping to come to you before long; but in case I am delayed, I write so that you may know how one ought to conduct himself in the household of God, which is the church of the living God, the pillar and support of the truth” (3:14-16).

Elders and deacons and their wives, mentioned in verses 1-13, needed to know how to act and serve as members of the of the household, or family, of God. In fact, there’s a certain type of behavior, conduct and way of life all Christians are to have in God’s household. That’s a theme in these last three verses of the chapter.

Ephesus was the home city of the temple of Artemis, known all over the ancient world. It was said to have 127 pillars holding up the structure, each of them standing 60 feet high and each a gift from various kings around the Mediterranean. Temples with pillars seemed to be a favorite style of the Greeks and it spread all over the world. Just as those massive pillars held up their famous buildings, the truth is held up and supported by the church of the living God.

We hold to the truth, teach it, and try to share it with the rest of society. The world is not generally aware of what the truth is, therefore, they aren’t going to hold it up for us. That’s our work, and we gladly do it for God who has saved us.

Paul is also careful here to point out that we are the church of the living God. That’s in contrast to the temple in Ephesus built to praise an idol that couldn’t look after itself. After all, the place was destroyed twice! We are the temple of God who is fully alive and powerful.

All that Paul has said so far is building up to verse 16, which concludes his thoughts in chapter 1. The verse reads like poetry with six statements about Jesus.

“And by common confession great is the mystery of godliness:

He who was revealed in the flesh,

Was vindicated in the Spirit,

Proclaimed among the nations,

Believed on in the world,

Taken up in glory.”

They’re even indented in my Bible (NASV) and spaced like poetry, as it probably is in your version too. Because of its unusual nature, some scholars have speculated it might be an ancient song that the early Christians used to sing. But that’s just a guess; nobody knows for sure. The same is said of two other New Testament passages: 2 Tim.2:11-13 and Eph.4:4-6.

The apostle is pointing out how mysterious it is that sinful people, as we all are, are somehow able to become godly. How could a rough, hard-living man be saved and develop into a wise elder? How could selfish, uncaring people obey the gospel and eventually become effective deacons? How could a foolish, self-centred woman obey the gospel, marry a good man, and help him serve the church as a wise leader? Godliness is certainly a mystery in Christ.

The truth that we read about in verse 15, of which the church is a pillar and support, is actually the mystery of godliness mentioned in verse 16 – for the purposes of Paul’s discussion. Mystery in the Biblical sense is something that God has hidden for a while and eventually revealed. Sometimes it means a truth already revealed, but still called a mystery (As in Eph. 3:4-5). The mystery of godliness is that God has taken sinners and somehow made them godly in His sight. How can a sinner look godly in God’s sight? It’s certainly not anything man could do. It is something God works in us. It’s connected with the mystery of what God did through Jesus.

That said, Paul moves further into verse 16 with his six points about this mystery.

HE WHO WAS REVEALED IN THE FLESH

One of the Bible’s great mysteries is that Jesus came from heaven as a physical human being. He didn’t arrive in the same fully mature adult way he would later leave it, at the ascension. He was born as a child and went through the same growth stages as we did, reaching manhood like we did. In fact, He didn’t begin his active work as a teacher until he was 30 years old.

How could God, expressed through His Son, become a man? Second century Christians debated this fact and, with the prodding of the Gnostics, developed all sorts of strange doctrines that eventually threatened the very fabric of the faith. Yet, the New Testament is adamant that Jesus became a physical man. In John 1:14, after John called Jesus the Word and that the Word was God, he said, “And the Word became flesh and dwelt among us, and we beheld His glory.” In Heb.10:4-5 we’re told, “Therefore, when He comes into the world, He says, ‘sacrifice and offering thou has not desired, but a body thou hast prepared for Me.’” And in Rom.8:3 we’re told that God sent “His own Son in the likeness of sinful flesh and as an offering for sin, He condemned sin in the flesh.”

Jesus, a spirit like the Father, came to earth and took upon himself a human physical body. In it He lived his human life, died in it, rose back to life, and ascended back to heaven in it. All of this is a mystery. And if God did that, He could also take imperfect and sinful human beings, save them through Christ and make them godly.

VINDICATED IN THE SPIRIT

Jesus did not have to be justified morally, like the rest of us do, for He was perfect. Yet he had his critics, detractors, and enemies. They wouldn’t accept His claims to be the Son of God, sent from heaven, and that He was the judge of all men. It was the Holy Spirit who worked with Jesus to vindicate these things about Himself. From his baptism on, the Spirit enabled Jesus to offer proof of who He claimed to be. In Luke 3:21-22 we find Luke’s brief account of the baptism. The Holy Spirit took the form of something like a dove and descended to sit upon Jesus, accompanied with the voice of God, “Thou art My beloved Son, in Thee I am well-pleased.” This constant presence of the Spirit through the works of Jesus proved who he said He was.

On Pentecost Peter said, “Jesus the Nazarene, a man attested to you by God with miracles and wonders and signs which God performed through Him in your midst, just as you yourselves know.” (Acts 2:22) He would later say to Cornelius, “You know of Jesus of Nazareth, how God anointed Him with the Holy Spirit and with power, and how He went about doing good, and healing all who were oppressed by the devil, for God was with Him. (10:38) This is part of the mystery of godliness – the Holy Spirit-proven claims of Jesus.

What God was doing through Jesus must have been a mystery to the angels. They were amazed; 1 Peter 1:12 speaks of their curiosity. They were ready to rescue the Lord when they watched Him suffer, but God did not call upon them. They beheld all these events, which means to observe and watch closely. I’m sure a squad of angels triumphantly accompanied Jesus back to heaven. What was once a mystery to angels was also a mystery to the world. What God did through His Son was, and is no longer, ambiguous. It has been explained.

PROCLAIMED AMONG THE NATIONS

Nations means Gentiles. The Jews thought they alone would have redemption. It was hard for them to see the fact that redemption is for all. At first, in Acts 10, Peter seemed reluctant to go to Cornelius’ home, as commanded by the Spirit. But he quickly taught the gospel to the man and his gentile family and was soon astounded when they spoke in tongues. This was God’s way of letting Peter know these gentiles were permitted to take the last steps in obeying the gospel. And then in Acts 11, the Jewish Christians of Jerusalem objected that Peter had allowed Cornelius to do this. But after rehearsing what happened, the Jews calmed down and glorified God.

The mystery they found so amazing was that all nations could have Christ. Gentiles were viewed as morally inferior people incapable of any sort of godliness. Somehow the Jews missed that the nations could be saved and develop godliness. God had to tell them.

The gospel, in many respects, is not a sophisticated message. It would seem to the world that the one bringing salvation to us should be someone great – such as a philosopher, skilled sports figure, or a wise politician. The world in all its sophistication could easily believe that. Yet God sent Christ, a carpenter’s son from a hick town, and yet many in the world still believed Him.

The gospel seems almost too simple to affect the world as it has. In 1 Corinthians 2:1-5 we find Paul’s behaviour when he entered Corinth to spread the news. “I did not come with superiority of speech or of wisdom, proclaiming to you the testimony of God. For I determined to know nothing among you except Jesus Christ, and Him crucified.” In Romans 1:16 he also said,

“For I am not ashamed of the gospel, for it is the power of God for salvation to everyone who believes, to the Jews first and also to the Greek.”

TAKEN UP IN GLORY

It’s not the fact He went back to heaven that is the mystery – it’s how He did it. Acts 1:9-11 tells us that he lifted off the ground and went into the clouds – as a man! He didn’t’ return home as a spirit, he went as a glorified human being with a body.

A few days before that, he appeared to the apostles who thought he should be a spirit. Yet he showed them the marks on his hands from the crucifixion, and even ate some food with them. In Luke 24:39 Jesus told them, “See My hands and My feet, that it is I Myself; touch Me and see, for a spirit does not have flesh and bones as you see that I have.” We too will have a glorified body in the future, just like Christ has now. Philippians 3:20-21 also verifies it.

Godliness is certainly a mystery. We wonder how we can attain it. We feel badly when come up short. But God produces godliness within us over time. That in itself is a mystery. The entire life of Jesus came with mysteries, all of which have been revealed. If God can do that, He can make godly people out of you and me.