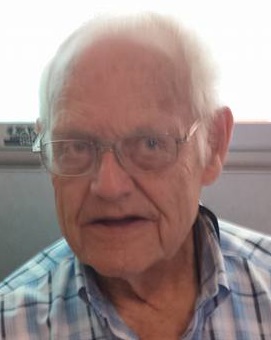 Eugene Charles Perry was born on July 19, 1922. He was the second of eight children of Alfred Ernest Perry and Grace (Stewart) Perry who met at a Bible School conducted by S. M. Jones at Beamsville, Ontario before WWI.

The Perry family attended the small country, Tintern church of Christ that had been formed by their ancestors and others on property they had donated.

Eugene’s first eight years of schooling were at the local one-room school. He learned to work hard on the farm during the depression. High School and additional studies were completed at the Beamsville High and Vocational School in 1942. Plans to enrol in David Lipscomb College were disrupted by a call to serve in the Royal Canadian Electrical and Mechanical Engineers of the Canadian Army from 1942 to 1945.

After receiving an honorable discharge, Eugene joined a High School friend at Abilene Christian College in Texas, where he earned his BA degree in 1948.

While in Abilene he met Evelyn Huffard, who was teaching at the Campus School. She had studied at David Lipscomb College and Harding College, and she received a BA degree in education from Abilene Christian College in 1946.

Eugene and Evelyn were married on December 23, 1946. After their marriage, Evelyn continued working while Eugene pursued his studies. They were blessed with four children: David, Patricia, Linda and Martha.

Eugene continued his education at Pepperdine University in Los Angeles, California in the field of Bible. Although he completed class work for his MA degree in 1949, the degree was granted in 1971 after he had done research for his thesis through the years while working more than full time. The study, “A History of Periodicals in the Restoration Movement in Canada,” was published in book form by the Gospel Herald Foundation in 2003 (306 p). Eugene was also granted an honorary Doctor of Laws degree by Harding University in 1974.

During 1949 and 50 Eugene preached for the LaSalle church of Christ in Niagara Falls, New York.

In the fall of 1950, in fulfilment of a previous agreement, the Perrys moved to Radville, Saskatchewan where Eugene was to head the Bible Department at Radville Christian College. An unexpected change in arrangements resulted in Eugene and Evelyn teaching instead in the High School for the next two years.

A planned move back to the Niagara Falls congregation was interrupted by the need for someone with their experience and qualifications to help launch Great Lakes Christian College at Beamsville, Ontario in 1952. They both taught at GLCC and Eugene was principal for 14 of the next 21 years. Eugene did fill-in preaching for churches in the area and preached for the Tintern congregation for several years.

In 1953 Eugene was invited by J.C.Bailey to publish the monthly magazine, the Gospel Herald, and did so in partnership with Roy Merritt until 1974. A Bible and church-supplies store was operated in the Perry home, and grew to serve churches and Christians all across Canada and beyond. Evelyn spent many hours helping Eugene in the bookstore, and the whole family worked hard each month assembling and mailing the Gospel Herald.

In the fall of 1974 the Perrys moved to Zambia to work with the Namwianga Christian Secondary School at Kalomo where they both taught and Eugene was Headmaster for six years. Evelyn did counselling and other work with the students who respected her highly.

They then moved to Livingstone, Zambia to help with a preacher training school and to operate a Bible Correspondence program. Many village and city churches were visited and encouraged during the nine years the Perrys spent in Zambia.

In 1983 they returned to Beamsville and Eugene taught for two more years at Great Lakes Christian College. Soon after their return, the Gospel Herald publication office and bookstore were moved back into their house and they continued this work until 2000. Eugene served as an elder in the Tintern church and continued to do fill-in preaching in the area.

On Saturday, August 18, 2013 Eugene gave a report to the historical society for churches of Christ in Canada entitled, “Reminiscences, Observations and Concerns.” http://www.oldpaths.com/Archive/Perry/Eugene/Charles/1922/Articles/Reminiscences.pdf

A few of the hundreds of articles Eugene has written can be found in the Old Paths Archive. http://www.oldpaths.com/Archive/Perry/Eugene/Charles/1922/

When this author was looking for a place to preach after graduation in 1961, Eugene and Evelyn offered him hospitality for several days and Eugene put him in contact with the church in Sarnia, Ontario. Eugene explained, “They can’t provide full support, but since you are single, you might be able to live on what they can give.” Thanks to his recommendation, I was able to begin my service as an evangelist with a tremendous group of the Lord’s people, who also contributed to our support in Europe for many years.

Countless people have been blessed in countless ways by Eugene and Evelyn Perry, tireless workers in the kingdom of the Lord!
Herselt, Belgium