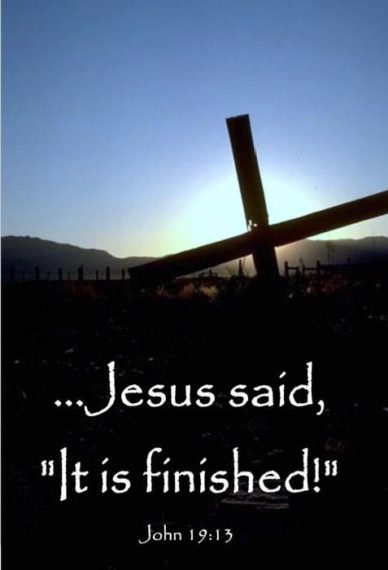 For Jesus, the cross was the goal from the very beginning. The incarnation was necessary for our atonement. He was born to die so that we might live. And when He had accomplished the purposes for which he had come, He summed it all up with the word: “finished.” “When he had received the drink, Jesus said, “It is finished.” Then he bowed his head and released his spirit.” (John 19:30 NLT)

The Greek word for finished is tetelestai. It was a common word in the original Greek and was used by various people in everyday life.

It is finished. Mission accomplished. It is done. It is made an end of.

But what was it that Jesus had finished, that day on the cross?

While it was true that our Lord’s sufferings were now finished, there was much more to it than that. Many of the Old Testament types and prophecies were now fulfilled and the once-for-all sacrifice for sin had been completed. The death of Jesus on the cross “put the final touches on the picture” that God had been painting and the story that He had been writing for hundreds of year. It completed God’s plan for our salvation and launched the divine explanation which we are still examining today.

When a debt was retired or a cash sale completed, a receipt with the word “tetelestai” meant “Paid in full!” So it was when Jesus died on the cross. Having fully met the righteous demands of a holy law; He paid our debt in full. The sin that Old Testament sacrifices could only cover, was taken away .

We have been set free from the power of sin in order to live a life free from sin. All of this and more, is what Jesus accomplished at the cross.

Some passages for reflection this week:

We may never fully know all that the Father and the Son had accomplished when Jesus said, “It is finished!” Yet we know this, that his life ended just as He had planned for it to, so that ours could begin anew.